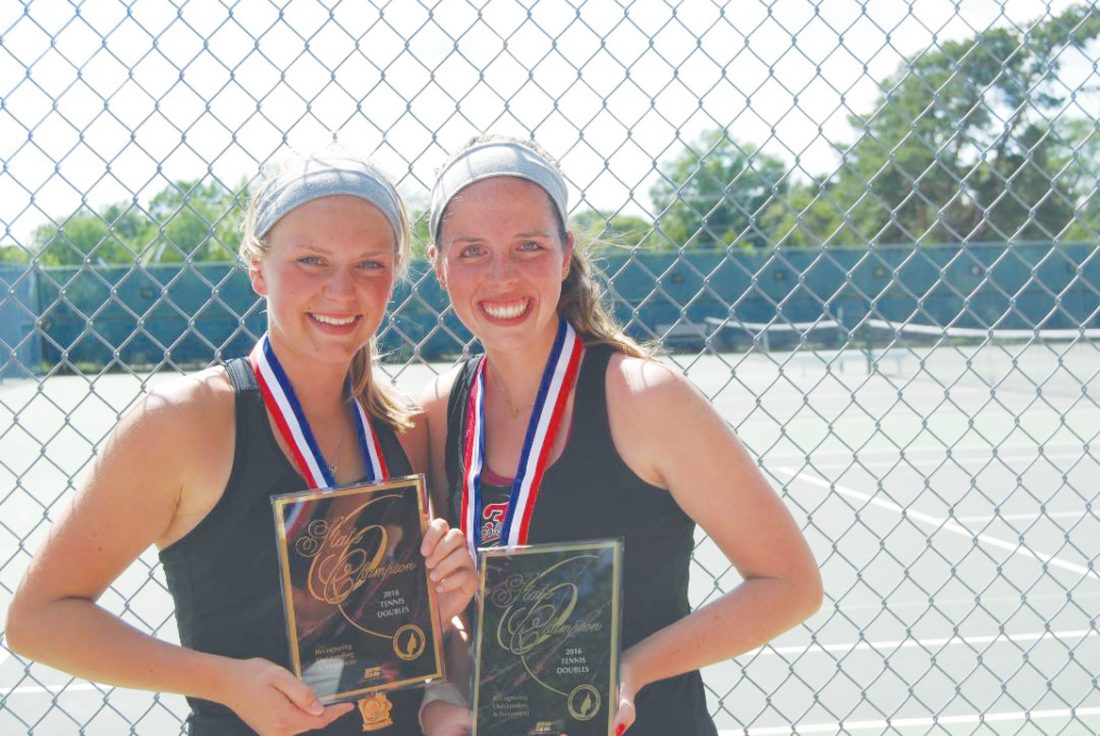 Growing up, Beth Murman and Jaci Cochrane would always share court time together at the Dodger Courts and Fort Dodge Tennis Club.

A friendship grew, and by the time their high school days arrived, the Fort Dodge Senior High graduates shareed an unprecedented championship run together.

Cochrane and Murman are the only Dodger girls in school history to be crowned tennis champions. Cochrane is the lone FDSH graduate to win a singles title, doing so on the singles side in 2013, and she later teammed up with Murman for a doubles crown in 2016.

Murman also earned a co-ed title with Jonny Bowser as a sophomore in 2016, then repeated with Bowser the following year as well.

During her first prep season, Cochrane cruised to state gold to make history for FDSH.

“I didn’t really have a lot of expectations my freshman year,” Cochrane said. “It was my first time playing for a team and for a school, so that was really cool.

“It was really rewarding to win the individual title. I’d been training for years prior to the championship so getting to compete for the Iowa state title was really special. Representing my hometown was also a really fun experience.”

After her freshman season, Cochrane moved to Kansas City for training. She was home schooled for the next two years.

“Looking back, I definitely would have played all four years if I could,” Cochrane said. “Unfortunately, the training requirements for the goals I had meant that I had to move to Kansas City and online school, but I was so happy I got a chance to go back for my senior year.”

Heading into her sophomore season, Murman was ready to hit the nets. When she heard of Cochrane’s return, it was a match made for the state meet.

“When I heard Jaci was finishing her career at Fort Dodge Senior High, I was even more excited for tennis season,” Murman said. “We were family friends growing up and to play with someone with a ton of experience and knowledge was a bonus.

“Jaci was one of my role models, so of course I was pumped.”

Murman admits she was a little nervous heading to the state meet as a sophomore with Cochrane.

“I was extremely nervous when Jaci and I headed into the finals,” Murman said. “The Cochranes and my family still to this day talk about how awful my warm-up was. I don’t think I could hit a ball in. I put so much pressure on myself because I didn’t want to disappoint Jaci and my community.

“I was playing with one of Fort Dodge’s finest…I had to step it up. We had worked so hard throughout the season and I didn’t want to cut it short.”

Even though Murman got off to a slow start, she was able to settle down and come through as a champion in the end.

“I still remember the last point. Jaci was returning and I was up at the net, and I put away a backhand volley and we won.

“Good thing I got that one over the net. There were lots of hugs and lots of cheering. Certainly a moment I will never forget.”

After finishing her senior season on the Rutgers University tennis team this past season, Cochrane is proud of the memories she made as a Dodger.

“Winning the individual title was fun, but winning the doubles title with Beth was really special,” Cochrane said. “I grew up playing with the entire Murman family, so it was fitting that I got to come back and win it with Beth.

“At first I was really on the fence about coming back to play one more season and if it weren’t for Beth, I might not have. But looking back at the memories of it, I’m very glad I did.”

The championship run wouldn’t end for Murman, as she claimed a co-ed title with Bowser, who had won a state crown with Murman’s older brother, Brian, in 2015.

“Playing with Jonny was such a fun time,” Murman said. “We grew up playing together, we knew each other’s strengths and built off of that. He was an animal at the net, and I liked hitting forehands.

“Watching my brother and Jonny win the state doubles title gave me another reason to give it my all. I wanted to make Jonny and my brother proud.”

Murman and Bowser wouldn’t be done at one, as they repeated as co-ed champs in 2017.

“Jonny and I dominated,” Murman said. “Winning state again was such a fun time, and celebrating with our families was even better. I was proud to be his partner.”

Murman’s senior season was a memorable cap to her standout career.

“As they say, senior year flew by. My last volleyball season, my last basketball season and my last season playing tennis for the Dodgers,” Murman said. “Three of the things that gave me such memorable experiences and friendships that will last a lifetime. Receiving the (Florence) Nordman Award (top female senior athlete at FDSH) was an incredible honor.

“I wasn’t supposed to be unpacking my bag the first day of state my junior year. I told myself that disappointing appearance was not going to happen again, I lost once at state my senior year and finished fifth.”

Her time on the court and the people she surrounded her herself with was something Murman cherishes to this day.

“Playing for Martha Mericle (coach) and Gloria Harrell (assistant coach) was such an awesome experience because they had been in my corner sense I started picking up a racket,” Murman said. “I cherish the moments I spent with them. After the last point of my Dodger career, I realized how special my four years at FDSH were. Looking at my family, grandparents, coaches and best friends in the crowd got me emotional.

“They had cried with me, they had laughed with me (or at me), they had fought with me, and never left. Those are my people, in my corner of life. Being able to have my favorite people watch me compete in my favorite sport is one of the best feelings ever. My senior year may have gone by fast but the memories I made sure didn’t.”

Now entering her junior at Winona State, Murman admits she will never forget her time in the Red and Black.

“I’m proud of being a Dodger. It sounds cliche’, but it’s true. Dodgers are the underdogs, the people who others doubt, the people who think we don’t stand a chance,” Murman said. “We might not have the million dollar facilities or the resources like other schools, but we do have passion. We do have grit. We do have talent. We will find a way, fighting adversity.

“I am most proud of staying true to who I was on and off the courts. I focused on the kind of person I wanted to be and the kind of person I wanted other people to see. Being away at college has given me the opportunity to show that same hardworking, thoughtful, and passionate woman to others. Being a Dodger has helped me become the person I am today and I am forever grateful for the community I grew up in.”