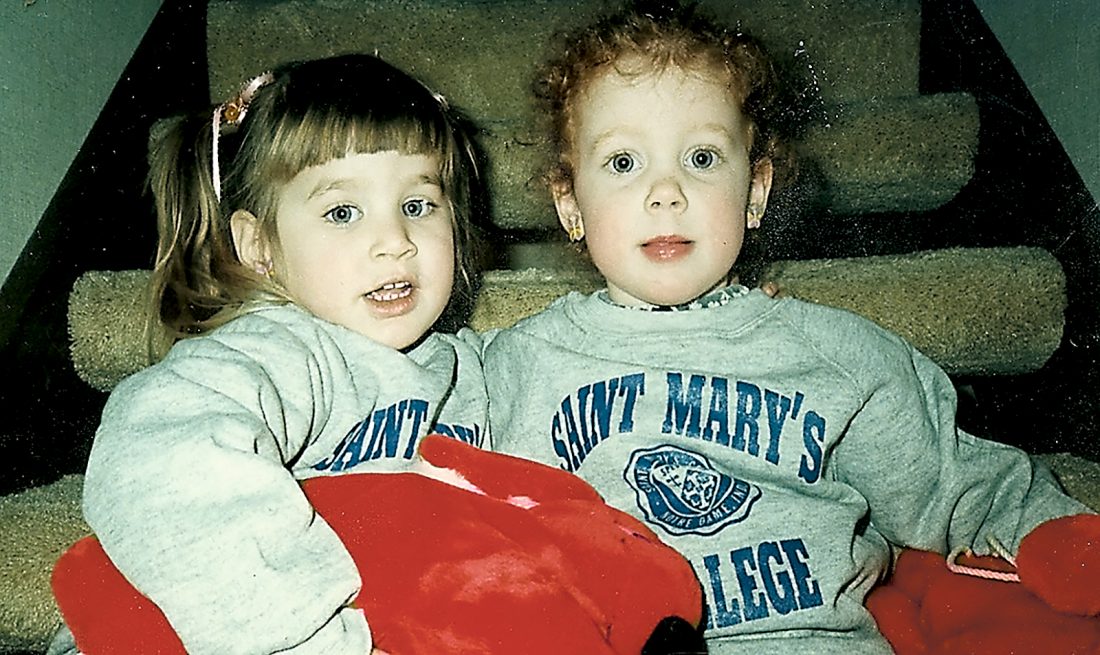 Their bond was unbreakable, but the friendship that grew from playing dolls to riding bikes and building forts will last forever for Katherine (Trevino) Dearborn and Erin Kersten.

The cousins, who are about a year apart in age, who could easily be mistaken as sisters, were inseparable growing up in Fort Dodge and on the tennis courts for St. Edmond.

“My sisters were much older or it seemed so at the time and Erin did not have any sisters,” Dearborn said. “We grew up playing dolls together, riding our bikes all over town, to building forts in the north woods.

“Twenty years later we were maid of honors in each others weddings.”

Kersten recalls the time they would spend together on and off the courts as moments that helped shape her career. 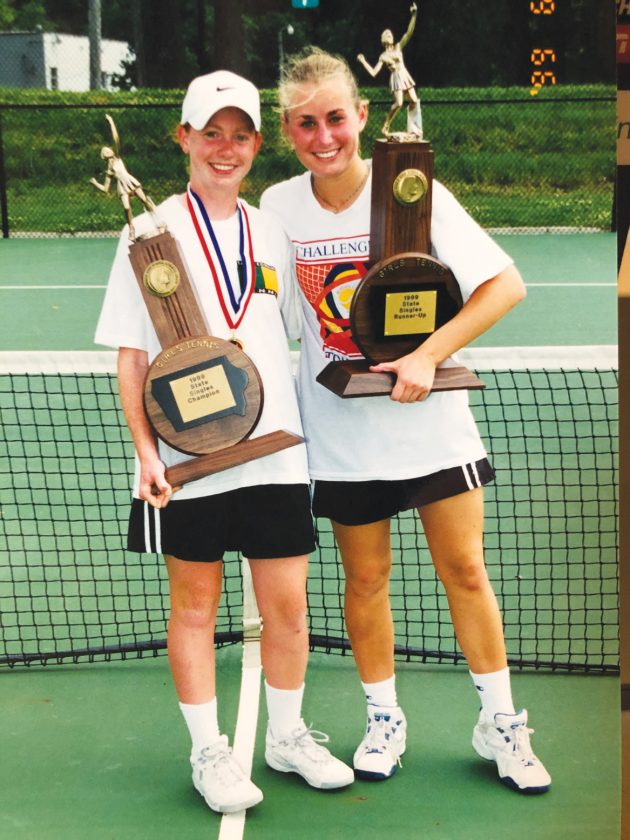 “Katherine and I were like sisters. We grew up several blocks apart and spent most of our time together in our early years playing tennis, traveling to tennis tournaments, riding bikes and building forts in the woods,” Kersten said. “In high school, in addition to tennis, we were also basketball and volleyball teammates.

“After college we lived and traveled together all over the world. But tennis was extremely formative to our identities and our friendship.”

“Katherine and I played each other a lot over a decade — in everything from the weekly Rec. Department league to junior tournaments to district and state matches,” Kersten said. “It never got easier because we’re both competitive, but frankly the wins were probably split 50/50 over that period.

“We each had our time to shine. And most importantly, we made each other better every day. We usually followed every singles match by paring up for a doubles match and that resulted in some wins and a lot of laughter.” 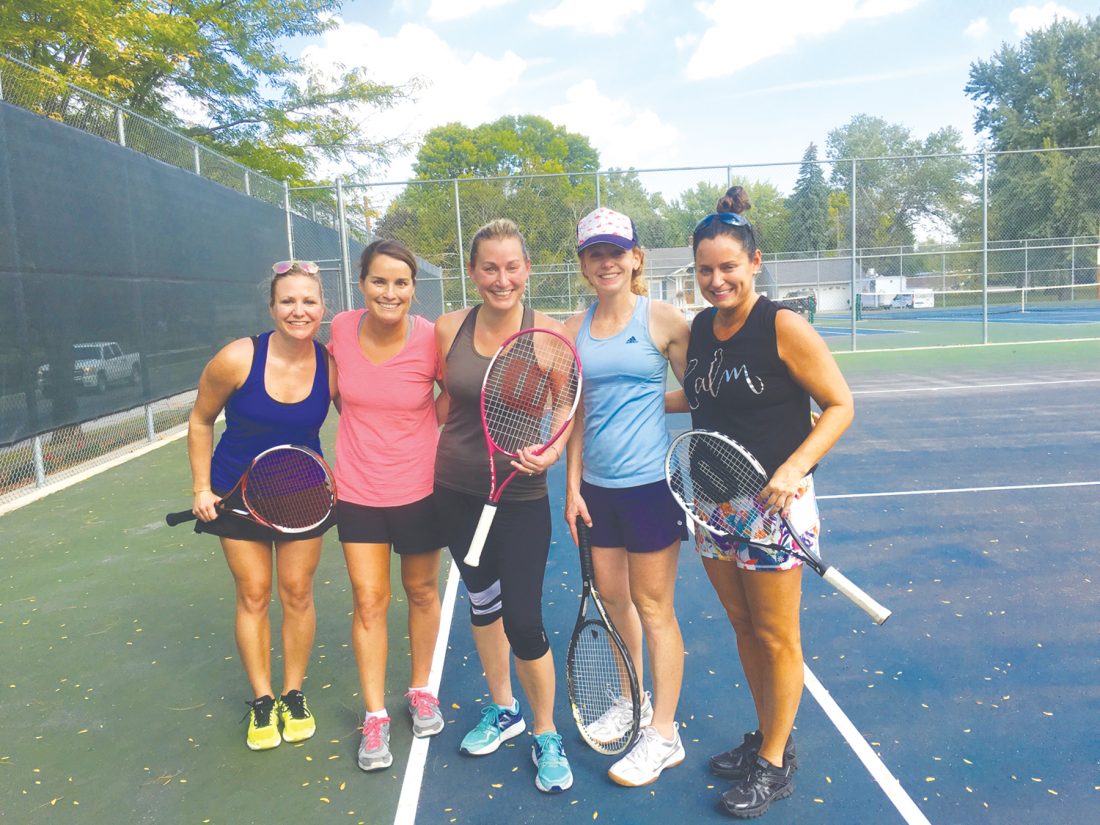 When Kersten’s senior year rolled around and it was time for the state finals, and it was Dearborn who would be across the net.

“I feel for the seniors this year during the pandemic because I remember everything being pretty special during my senior year,” Kersten said. “Winning a state title was the best way to end my high school career and it was an even sweeter end to the story that Katherine secured the title during her senior year.”

Dearborn remembers how tough it was playing her cousin for the title, but also how she felt to see one of her family members achieve their goals.

“To play a family member for the state championship was really hard, especially at the young age of 16 and 17. It’s hard enough playing in a state championship, but playing someone that’s like a sister to you is a whole new dynamic,” Dearborn said. “No training or practice can prepare you for that. I have to give kudos to our parents because they really made sure that our friendship came over any match.

“When Erin beat me fair and square for the state championship in 1999, of course I was upset, but not upset at Erin. I was so happy for her. She deserved it and she played her heart out that day. After the match I couldn’t stop hugging her because of how proud I was of her. Her triumph and win over me and my feelings of pride in her trumped my sadness of losing to her. After all, my cousin just won the state championship, who wouldn’t be proud?”

Dearborn’s hopes of becoming a state champion didn’t end, as she came back in 2000 to finish her career as St. Edmond’s second girls state champion.

“It meant a lot (to win the state title), as I worked hard for years training,” Dearborn said. “I sacrificed lake trips with friends so I could travel around the country competing. I spent mornings running sprints, and after school going on runs before tennis practice. I worked hard and it kept me out of trouble. It really shaped the person I am today and my work ethic.”

“After undergrad, I moved to Chicago where I lived for 12 years. In Chicago, I discovered that tennis was in fact a very expensive sport and finding court time in a big city was tough for a 20 something,” Kersten said. “I picked up triathlons and have raced competitively for lots of years.

“I now live in Boulder, Colorado with my husband (Chris Smith) and almost two-year old daughter, Cora. I work for a brand consulting firm. I love trail running and cycling, but I can’t wait to introduce my daughter to tennis soon.”

While looking back on her tennis career, Kersten is proud to have been part of the sport that helped shape her career.

“St. Edmond was a wonderful support community. In fact, the entire Fort Dodge community was instrumental in our development as tennis players,” Kersten said. “The Dodger Courts were our home base for many years.

“We’d “go hit” with anyone who was willing. I spent years teaching kids lessons for the Rec Department as well.”

Dearborn is now living in Massachusetts as an area sales manager for Waste Management. She oversees the sales department in Rhode Island and Southern Massachusetts. She is married to Robert Dearborn and has a step son, Sean.

“I went to Loras to play,” Dearborn said. “My sophomore year I took a trip to visit Erin in Spain for a couple of weeks. We spent time traveling to Spain, Italy, and France. It was a trip of a lifetime.

“After graduation I moved to Chicago and lived with Erin for a few years. I worked my way up through corporate America which resulted in me relocating all over the country from Chicago to California, Missouri, Arizona and now Massachusetts.”

Reflecting back on her career Dearborn was proud of what she accomplished.

“Along with all of my coaches, the Fort Dodge Senior High boys team helped train me. Matt Stiles, Jeff Stell and Jeremy Goodner were instrumental in my development,” Dearborn said. “When I was in seventh grade I was getting pressure to move to Kansas City or Des Moines so I would get better training from some of the tennis coaches there. My coaches in both cities were trying to convince us that I needed to be in a better spot for competition and year round training. I had mixed feelings and felt torn because of my relationships with my friends at St. Edmond.

“I loved playing other sports with my friends and I knew that I would be gone. I knew there would be no prom or sitting in a corn field hanging out with my friends. To this day I still talk to those friends. No tennis match or scholarship could ever replace my friends in Fort Dodge. I couldn’t be more proud to be a Gael or to call Fort Dodge my hometown.”