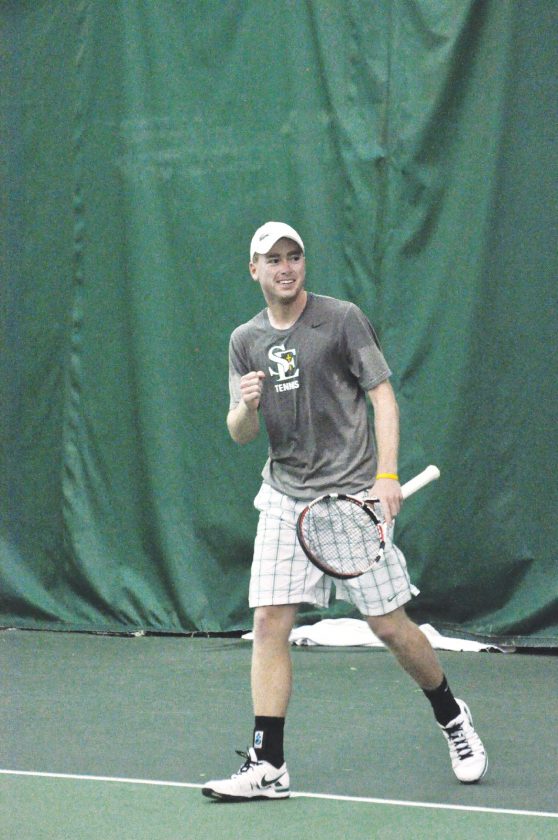 —Submitted photo Aaron Chalstrom celebrates after winning the state championship in 2013. Chalstrom was also a three-time runner up in singles.

Once the final ball hit the other side of the net at the state tennis tournament in 2013, all Aaron Chalstrom could do was smile.

The 2013 St. Edmond graduate had been in the state finals all four years of his high school career and a title evaded him, until his senior campaign.

“I honestly just smiled (after winning),” Chalstrom said. “I was relieved to finally win after three consecutive losses. I remember looking at Coach (Jacob) Short and he was so excited, so were my family and friends. Brian Rasmussen, a (Fort Dodge) Senior High graduate, lived around the corner from me and helped me so much with my tennis, so it was fun to see his reaction as well.

“What made that match so fun was how many people were there in Waterloo. We played inside due to rain so it was a little louder than normal and the seating was close to the court. My opponent was from Waterloo Columbus, so he had a lot of people there in front of his home crowd, but there were as many or if not more St. Edmond fans there. It was so loud and such a fun environment to play in and that is really what I remember most from that day.”

Chalstrom put together a brilliant career for the Gaels on the tennis court, reaching four finals and being part of two state finals with the St. Edmond team.

In his last chance for a state championships it didn’t start out the way Chalstrom had hoped.

“In the finals, I played someone who I had played many times growing up and I knew it would be a battle. I knew the points would be long and it would probably be a three set match,” Chalstrom said. “I lost a close first set and was down 0-3 and 1-4 in the second set. I didn’t think I was playing my best, but a lot of that was due to my opponent playing well. Coach Short and I had a good relationship and he always knew when I needed more support or encouragement. He could tell I was a bit frustrated and he just told me to keep fighting for every ball and you never know what could happen. I needed that reminder and I slowly started to find my game and the set got tighter.

“At 4-5, I saved a championship point and ended up taking the second set 7-5. My opponent began to suffer physically and I kind of ran away with the third set. It was rewarding because my fitness and conditioning was something I had focused on that entire year and it paid off when I needed it.”

With state singles a couple of days before the state tournament, Short was happy to see Chalstrom earn his first state title.

“Aaron winning the singles championship that year was really important. It was a testament to him and his family and all the work they had put in up to that point,” Short said. “One of Aaron’s attributes as a tennis player is that he could play tennis all day every day, and his conditioning was one of the biggest reasons he won that match. He had such a battle in the semis that I was a little worried about his energy going into the finals, but he showed the heart of a champion and was able to wear down his opponent.

“It was so fulfilling to see him celebrate with his friends and family, it is a moment that is burned into my memory and makes me emotional to this day. Seeing his growth as a player and leader from his freshman to senior year was incredible to watch.”

Short was able to watch the progression Chalstrom made from start to finish.

“The mental toughness it takes to overcome the losses in the finals the previous three years and to win as a senior is really special,” Short said. “I am so proud of what that group accomplished, and I hope that they realize how special they were. I will always love those guys, they had a huge impact on me as a coach.”

After his senior season Chalstrom was unsure of his athletic plans, but once Creighton came calling, he was all in.

“Unlike a lot of my tennis peers, I didn’t train for tennis year-round due to playing baseball and basketball,” Chalstrom said. “In the back of my mind I always felt that if I could commit to tennis full time and train with players my level and above every day, I would see a lot of improvement in my game. But that is hard to convey to coaches during recruiting too, and I understood that.

“When Coach Lilly at Creighton offered me a walk-on spot in the middle of the summer of 2013, I jumped on it. I improved quickly after arriving on campus and ended up earning a starting spot in the line up all four years. I finished my career in the Top-15 for most singles wins in Creighton program history.”

Looking back on his career in high school, Chalstrom loved the time he put into his game.

“Tennis started as something for my twin sister Ellen and I to do together when we were young. We lived literally right across the street from the Dodger Courts and ended up spending a ton of time there during the Rec Department lessons and junior league,” Chalstrom said. “We had coaches such as Nick and Hilary Cochrane, Jared Feddersen, Luke Boyd, the Eslicks, Karen Mortensen and so many others that just made it fun for us and that kept bringing me back to the courts.

“What started as something fun to do created a lot of memories for me — hanging out with the older kids at the courts to traveling to junior tournaments to playing high school and college tennis. I’ve met some great people through tennis and have been able to travel all over the country for it. As much as I miss playing and competing, I’m thankful for all the people tennis has connected me with and the places it has taken me. Fort Dodge has a great tennis community that I feel will always be a part of who I am.”

After graduating from Creighton in 2017 Chalstrom jumped into coaching. For the last two years, Chalstrom has been working as the graduate assistant coach for the men’s team at Creighton while also completing his MBA.