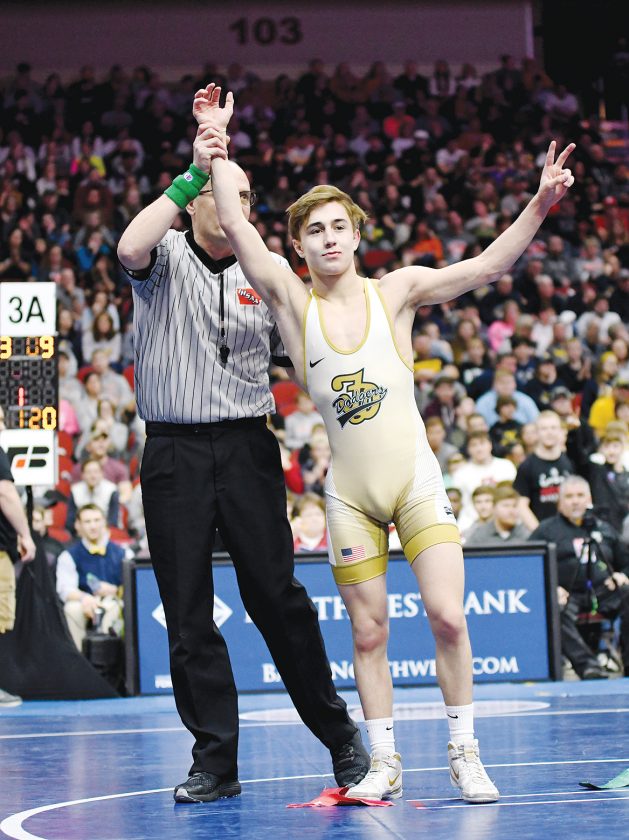 Drake Ayala never shies away from a challenge on the wrestling mat.

The same rules apply in the classroom.

Fort Dodge’s junior state champion was named an academic all-state selection by The Predicament publication this week — one of 14 wrestlers from the state of Iowa to receive the top honor.

Now a repeat first teamer in the classroom, Ayala earned an A in every class but one this year, and has a cumulative grade point average above 3.9.

“I got a B-plus in chemistry,” Ayala admitted.

The Dodgers’ superstar finished his second consecutive unbeaten season with a title at 120 pounds. A consensus Top-15 recruit nationally in the Class of 2021, Ayala went 48-0 and has prevailed in 91 consecutive high school matches. He is 136-2 in his career at FDSH, and became just the eighth Dodger ever to repeat as a state gold medalist.

Ayala won the Dan Gable Mr. Wrestler of the Year award for Class 3A in March, then committed to the University of Iowa.

Thanks to both the support and discipline provided by his parents, Sam and Angie, Ayala has “always tried to approach school like wrestling” from a competitive standpoint.

“In fact, it’s way more important. That’s always been the message in our house,” Ayala said. “It’s not just about sports. There are a lot bigger things in life, and (an education) gets you there. Someday, wrestling won’t be there anymore and I’m going to need what I’ve learned (academically) in the real world.”

Ayala added he took multiple college courses this year to “help better prepare myself” for the next level.

“It’s been good for me — more challenging,” Ayala said. “Typically, it’s been pretty easy for me to pick up on something and remember it (up until this point). That won’t always be the case. I’ll have to study more and work even harder at Iowa.

“Fortunately, my counselor (at FDSH) has pushed me to get into college classes more and help with that transition (to the next level academically).”

Ayala has been “doing my best” to stay as active as possible during the forced down time due to the global pandemic.

“I’ve been training and lifting with my dad,” Ayala said. “It’s more important than ever to stay disciplined (in situations like this) and find ways to push yourself. Sometimes you have to get creative. But you do whatever it takes until things get back to normal.

“Obviously nothing is really set in stone.”

Ayala made sure to thank The Predicament for recognizing Iowa’s elite prep student-athletes.

“It’s great that they do this for us,” Ayala said. “I know a lot of effort goes into tracking everything down (grade-wise) and they don’t necessarily have to do it. But it means a lot to those of us who really put in the time and the miles with school.”