A LEGEND STEPS ASIDE

After over 930 career wins, Sandquist will retire from coaching 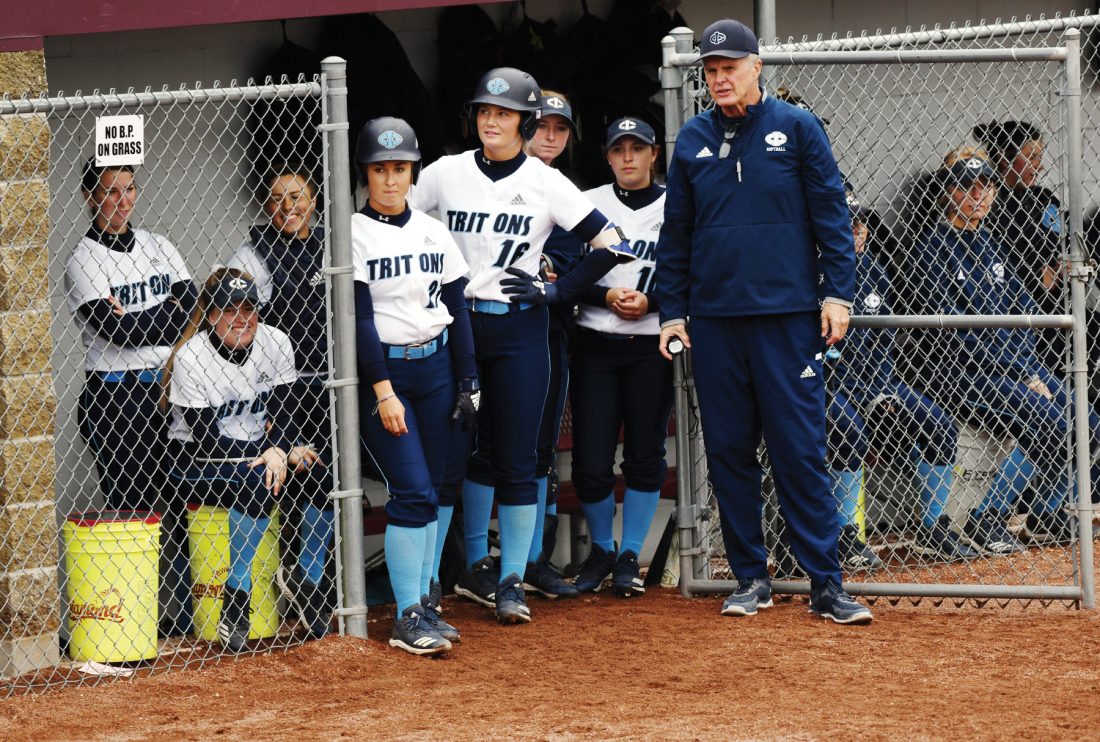 Messenger photo by Britt Kudla Rick Sandquist talks to his Iowa Central softball team in the dugout at Rogers Park last spring. Sandquist announced his retirement from coaching on Friday.

There was never going to be a perfect time for Rick Sandquist to walk away from the sports he will forever love.

For as much passion as he both carried and shared when it came to softball and baseball, though, Sandquist’s family was always going to be his ultimate priority.

The veteran coach, who gave the Fort Dodge community nearly 30 years of leadership on the diamond, officially announced his retirement on Friday. Sandquist is relinquishing his post at the head of the Iowa Central Community College softball program, which he most recently held since 2016.

“After almost four full decades in coaching and education, it’s just time,” Sandquist said. “I’m not going to pretend this is easy, or something I’m completely ready to give up, but I don’t think that moment would necessarily ever come. I love the sport. It’s who I’ve always been. It energized me. I lived for game day.

“With everything that happened (this past spring due to the global pandemic), though, I started to give (retirement) even more serious thought. Annette (Sandquist’s wife) and I have four incredible children and seven amazing grandchildren. And at this point, they don’t just want me around — they need me around. What more can you ask for? That just trumps everything. I’m at peace with the decision, knowing it’s about being there more for my family. They are my rock.”

The 60-year-old Sandquist moved to Fort Dodge in 1986 after obtaining Bachelor’s and Master’s degrees from Arkansas State University and Northwest Missouri State University, respectively. His first year of coaching baseball came in the summer of 1988 under Dodger baseball legend Ed McNeil.

Sandquist became the Dodgers’ head coach in 1991, and held the position for five years, guiding Fort Dodge to state in his final campaign. He took over the Iowa Central baseball program in 1996, and helped the Tritons reach the NJCAA World Series five times before stepping down in 2002.

The coaching bug bit Sandquist again in 2006, when he filled the Iowa Central softball vacancy. He turned the Tritons into a national contender, leading them to the school’s only NJCAA Tournament berth three years later.

Sandquist left the job to become the school’s athletic director in 2010, but returned to the softball diamond in 2016. He served as Iowa Central’s AD through 2018, and was the softball coach for the last five seasons, including less than half of the year this spring before COVID-19 ended the campaign.

In all, Sandquist amassed over 930 career victories as a head coach, including 425 as the Tritons’ softball leader and 390 on the baseball side.

“Coach Sandquist did a spectacular job and has represented Iowa Central the right way for 25 years,” said ICCC athletic director Kevin Twait, who succeeded Sandquist two years ago. “Expectations were high and he worked hard. He treated his players fairly and built a culture. His teams respected the game, played fast and had fun. And he just had a special knack for getting his kids to buy in.

“Rick made the transition from baseball to softball look effortless. I think it’s pretty amazing that he succeeded the way that he did in two sports that look the same on the surface, but have plenty of differences. That’s a testament to his knowledge, his willingness to learn and adapt, and his penchant for connecting with the student-athletes.”

Sandquist lauded both the guidance and patience of Iowa Central during his tenure.

“There’s no other school like it,” Sandquist said. “They’ve been incredibly flexible with me and always made me feel like my work here mattered. From the time (then-ICCC president) Dr. (Robert) Paxton hired me (before the 1996 baseball season), to (current vice president of enrollment management and student development) Mr. (Tom) Beneke and now (president) Dr. (Dan) Kinney — I couldn’t have asked for a more supportive administration. And both (athletic directors) Dennis Pilcher and Kevin Twait as well. It’s just been a terrific experience. They were in my corner all along.

“I never thought of the grass being greener someplace else. It was always green here.”

The lack of closure from the 2020 Triton softball season “will always be a bitter pill to swallow,” Sandquist admitted. Iowa Central was off to a 15-4 start with a national ranking, and Sandquist “could really see the team becoming something special.”

“This group was the total package. Power, speed, defense, and the chemistry was really coming along,” Sandquist said. “All the pieces were there. They were fun to watch and fun to be around. But there is a higher power in charge.

“I really struggled when I had to tell the team I was retiring. It was emotional. But I can walk away knowing the program is in great shape with a bright future ahead. That’s very important to me. I’d never want to leave with the cupboard bare.”

Assistant coaches Bo Tjebben, Alex Boyce, Dale Schnetzer and Steven Posey are all expected to remain with the program in a capacity yet to be officially announced.

“I can’t say enough about my staff through the years,” Sandquist said. “All of my former assistants through Bo and the current group. All the times recruiting, the preparation and game day, where they put it all together.

“Their loyalty, dedication and support was always greatly appreciated. They made my life so much easier, and I loved every minute of it.”

Sandquist added he “always tried to make sure” all student-athletes on his roster felt valued.

“I wanted to be fair, first and foremost,” said Sandquist, who also helped coach basketball in the Fort Dodge Community School District and was Iowa Central’s first head bowling coach. “It’s impossible to treat everyone the same, but I made sure to communicate with every player I had every single day. Because they were all important to the program in their own way.

“I’m really going to miss the relationships more than anything else. Just building a team and getting to know the kids. I was maybe a little more old school, but still feel like it’s the best school: no foul language allowed, a respect for faith, and trying to instill life-long morals and values in the young men and women I coached. I hope that’s what they remember about me at the end of the day.”

“I have absolutely loved being a part of the community for so many years,” Sandquist said of Fort Dodge. “This town comes together like no other and it’s inspiring. All four of my kids graduated high school here, and the friendships that our family created are second to none. There are so many good people in this town.”