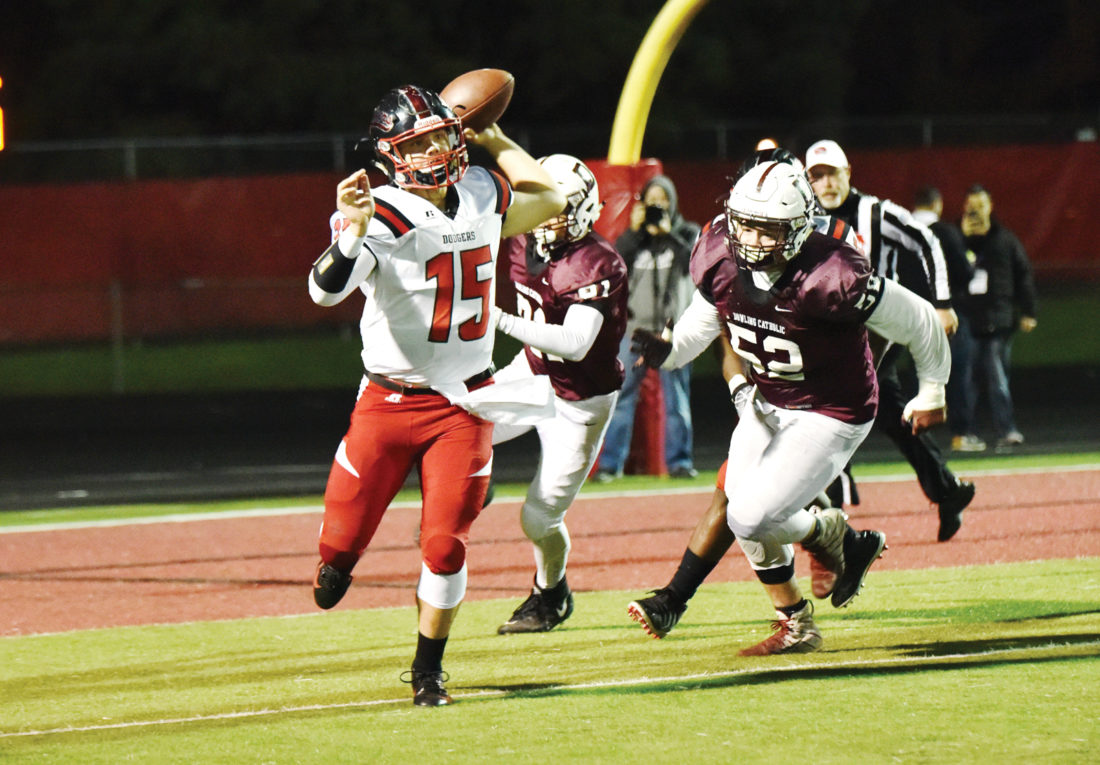 Messenger photo by Britt Kudla Drake Miller of Fort Dodge throws a pass against Dowling during the playoffs in Des Moines.

The past decade around The Messenger area has featured some memorable moments on the football field.

Dating back to the 2010 season and running through this past fall, we saw St. Edmond reach the UNI-Dome twice behind the running power of Tate O’Tool; the Dodger trio of Sam Cook, Drake Miller and Tysen Kershaw re-write the school records; and incredible performances from the likes of Emmetsburg’s Andrew Wellik, Southeast Valley’s Kyler Fisher and Algona’s Wyatt Wegener.

And of course, the “big guys” upfront that were protecting and clearing holes for all of that production like Manson Northwest Webster’s Cal Twait, Fort Dodge’s Ethan Bartlett and St. Edmond’s Chad Remsburg.

To be included for consideration on the all-decade team, players had to have graduated between the 2010-11 and 2019-20 seasons. Honorees are listed in the order of their graduating year. 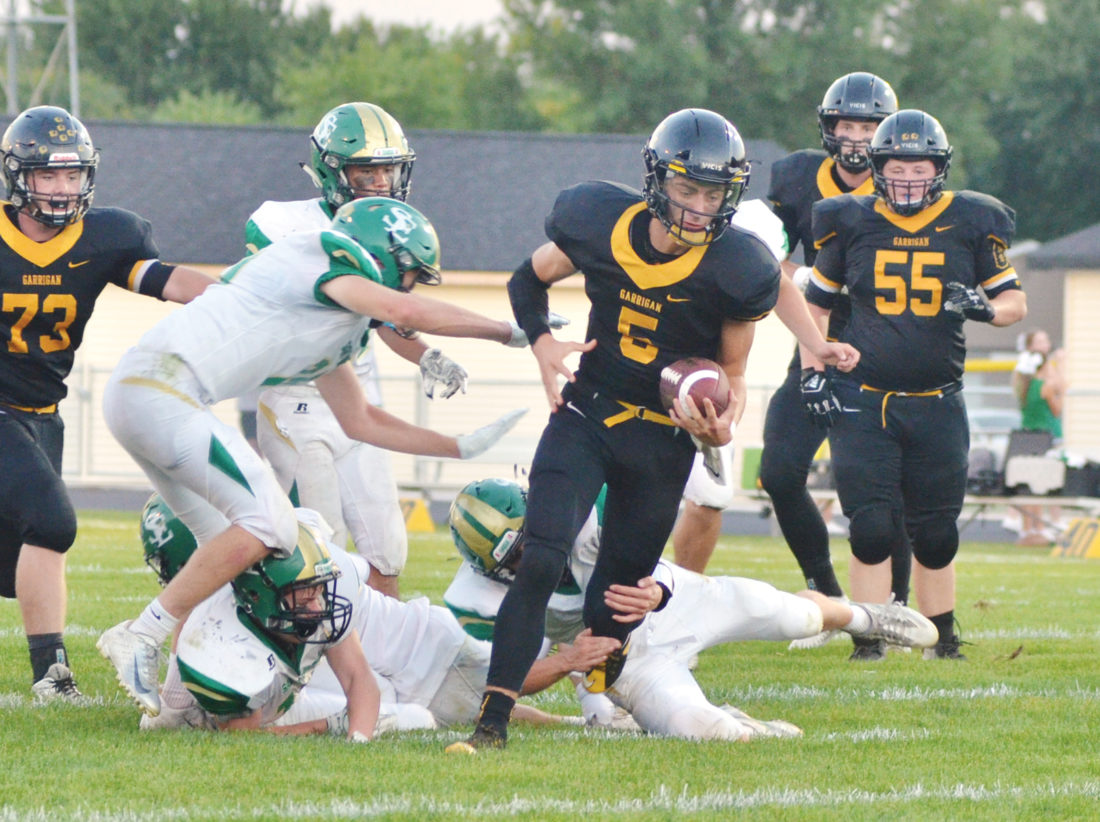 Photo by Greg Grabianowski, for The Messenger Bishop Garrigan senior quarterback Brad Capesius scrambles for a gain against St. Edmond in Algona earlier this season.

During his two seasons under center for the Jaguars, Nolan Brand led the program to a pair of state playoff games.

Brand completed over 50 percent of his passes as a senior, throwing for 2,027 yards with 24 touchdowns. He finished with 174 career completions for 3,414 yards and 40 touchdowns, winning 13 games.

Always around the Dodger football team as the son of a coach, Drake Miller found himself at the controls of one of the more prolific stretches of offense in school history. 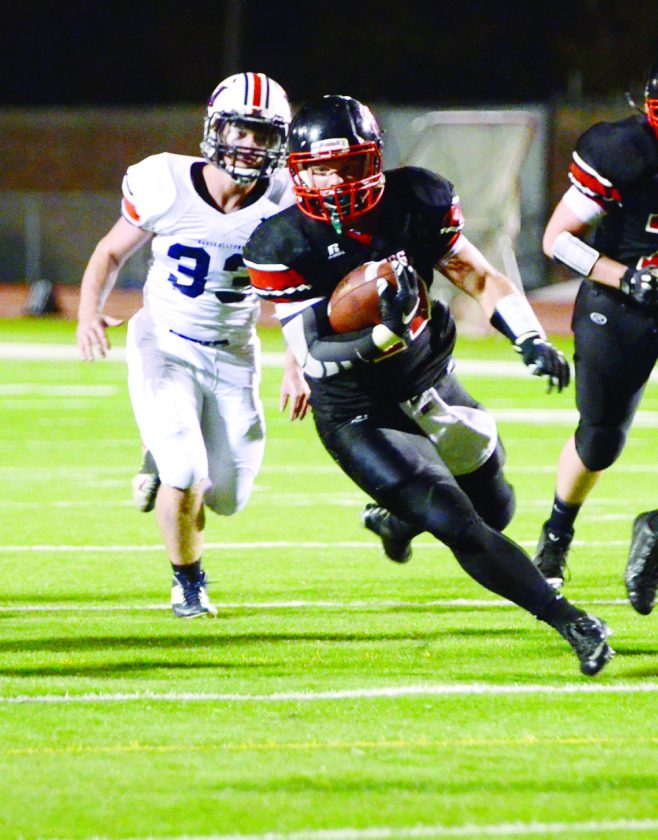 Miller completed his run with every Fort Dodge passing record, helping the team reach the playoffs and earning Class 4A player of the year honors after throwing for 2,972 yards and 29 touchdowns.

For his career, Miller 7,100 yards with 75 passing touchdowns. He ranked fourth all-time in 4A history for passing yards, second in TDs and second in completions when he graduated.

Thirty-four times over a three-year career Brad Capesius led Bishop Garrigan into action. In 31 of those games, the Golden Bears came out victorious.

Capesius, who helped the team reach the state championship game as a sophomore, threw for 2,783 yards, ran for 1,476 and had a combined 56 passing and rushing touchdowns. He also picked off 12 passes on defense. 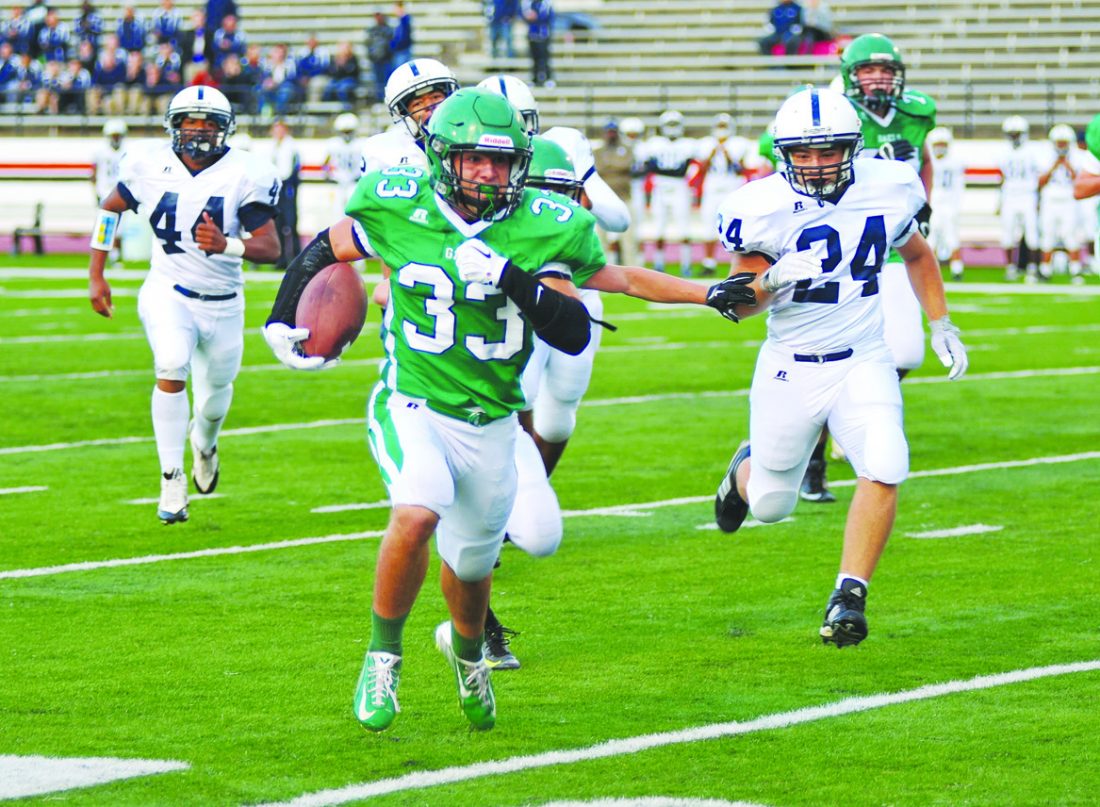 The tradition of E-Hawk football is well-known. During the past decade, there has been no better running back than Andrew Wellik.

As a senior, Wellik ran for a state-best 2,734 yards and scored 38 touchdowns, helping Emmetsburg win 11 games and reach the state semifinals for a second consecutive year.

Over his three seasons, Wellik carried the ball 555 times for 4,846 yards with 69 touchdowns, with the E-Hawks winning 33 games and reaching the playoffs all three seasons. 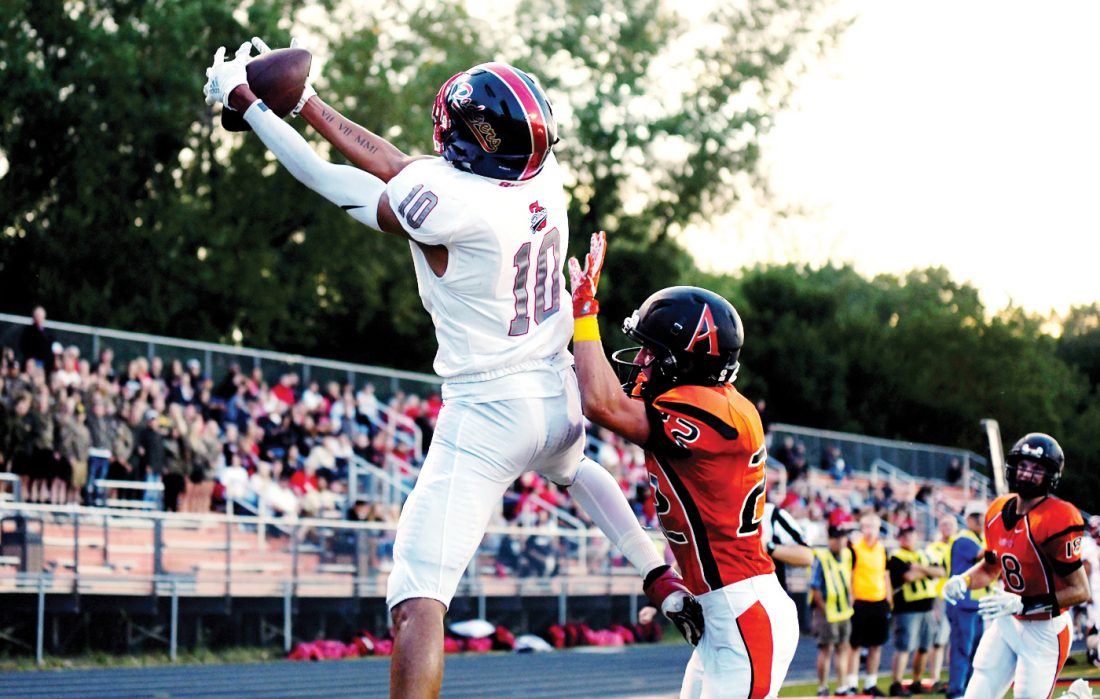 Messenger photo by Britt Kudla Tysen Kershaw of Fort Dodge makes a catch for a touchdown at Ames last Friday.

The consummate workhorse for three seasons, Sam Cook carried the ball 664 times for a school-record 4,882 yards and 52 touchdowns. He also recorded 141 tackles, with 24 coming for loss, on the defensive side.

As a senior, Cook had 1,838 yards and 25 touchdowns rushing, catching nine passes for 183 yards and two scores, and throwing another TD. He also made 56.5 tackles, seven for loss, three picks and scored on defense to cement his status as one of Class 4A’s all-time legends.

Cook had three consecutive seasons of 1,000 yards and made 10 tackles for loss as a ninth-grader. He holds Fort Dodge school records for rushing yards in a game, season and career, and both the season and career TD marks.

Messenger photo by Britt Kudla Southeast Valley’s Kyler Fisher breaks free for a run against Estherville-Lincoln Central this past fall.

During the same time as Sam Cook at Fort Dodge Senior High, Tate O’Tool was putting together a career for the ages with St. Edmond.

O’Tool finished as the program leader with 810 carries for 5,437 yards and 79 touchdowns. That included a junior season with 380 carries for 2,590 yards and 47 scores, numbers that ranked first, second and first in the state for all running backs.

He had three consecutive seasons with at least 1,308 yards rushing and 14 scores, adding another 241.5 career tackles on defense with 11 for loss and three interceptions. O’Tool rushed for over 250 yards seven times during his career in a single game, including five times in 2014.

When Southeast Valley needed a big play or the tough yard to convert, they put the ball in the hands of Kyler Fisher.

Fisher concluded his Jaguar career with his best offensive season, running for 2,046 yards and scoring 31 touchdowns, while adding another 18 receptions for 195 yards and two scores. He also made 62 tackles on defense.

While he would make a name for himself along the offensive line at the University of Iowa, with Webster City, Boone Myers was an imposing 6-foot-5, 250-pound tight end.

Myers caught 30 passes for 407 yards and eight touchdowns in three seasons, helping the Lynx win 21 games during that time. He also made 96.5 tackles with seven sacks from his defensive end position.

During his junior and senior seasons at Newell-Fonda, Connor Wolterman caught 65 passes for 1,650 yards and 30 touchdowns, helping the Mustangs win a state title and 23 games.

Wolterman had 1,056 yards and 17 scores as a junior, making 96 tackles and picking off six passes. He finished with 153.5 career stops and 10 interceptions.

One of the most prolific tight ends in the state in 2017, Southeast Valley’s Dakota Jaeschke caught 43 passes for 1,049 yards with 16 touchdowns. He ranked sixth in the state in TDs and eighth in yards.

Quarterbacks will tell you that they would be nothing without talented wide receivers, and the Fort Dodge QBs had those in Trey Mosley during his time in uniform.

Mosley had over 50 touches for three consecutive years on offense. He finished his career with a 61-catch, 924-yard, 11-touchdown senior season.

One of the top receivers to come through Dodger football history, Tysen Kershaw put a cap on his time in the red and black with 49 catches for 606 yards and eight touchdowns this past fall.

Kershaw finished his career as the first Fort Dodge player to surpass the 2,000-yard receiving mark, recording 149 receptions for 2,145 yards and a school-best 24 touchdowns.

In two seasons on the gridiron, the Dodgers racked up over 5,000 yards and scored 75 touchdowns, and Ethan Bartlett was in the trenches for much of it. Fort Dodge went 15-5 during that time.

A constant for the Dodgers, Jake Porter helped the offense rack up over 6,000 yards his final two seasons. Fort Dodge scored 50 touchdowns during that time.

With all the skill position players in place, the Gaels needed production in the trenches. Chad Remsburg was one of many to provide that, as the offense recorded 9,339 yards and scored 132 touchdowns in two seasons. Remsburg also made 105.5 tackles on defense.

A member of The Messenger all-decade basketball team, Cal Twait shined on the football field at the same time. Twait helped the team record 77 touchdowns his final two seasons, adding 98 tackles, 23 for loss and 10 sacks.

A state champion with the Mustangs, Mason Scheidegger used his force to help the N-F offense rack up 9,577 yards his last two years and score 152 touchdowns. .

An imposing figure, Owen Terwilliger helped the Wildcats record over 2,200 yards and score 17 touchdowns as a senior. He also had 28.5 tackles with six for loss and three sacks.

The prolific Dodger offense had a key cog along the line in Logan Finowski. The lineman helped the team win 11 games his last two years, as the unit racked up over 8,000 yards of offense and 99 TDs.

A regular on both sides of the line for the Gaels, Nick Lawler helped the offense rack up over 4,000 yards his last two seasons and 40 touchdowns. He also recorded 107 tackles and three sacks as a junior and senior.

It was evident to the South Central Calhoun coaching staff that they had a special player in Kody Case.

The son of head coach Bryan Case, Kody shined on both sides of the ball and from multiple positions, running for 1,432 yards with 18 touchdowns while catching 120 passes for 2,205 yards and 32 more TDs.

In his final season as a Bulldog, Wyatt Wegener helped the team reach the state semifinals. He was one of the top all-purpose threats in the state, finishing with 2,130 yards on offense and 30 touchdowns.

The pressures that go into kicking never bothered Ty Littzen, as the Dodger made all 22 of his extra-point as a senior. He also had three field goals, including a 51-yarder while picking up 21 touchbacks on 35 kickoffs.

Littzen made 24 of 27 PATs as a junior with five field goals, highlighted by a 48-yarder. He recorded 27 touchbacks on 42 kickoffs.

He finished his four-year career 92-for-99 on extra points with 15 field goals.

It can be difficult to find a reliable kicker in high school football, but South Central Calhoun had a nearly-automatic foot in Zane Neubaum.

Neubaum made 90 percent of his extra-point attempts as a senior and also successfully knocked through six field goals, including a long of 37 yards. For his career, Neubaum made 152 of 169 PATs and 15 of 22 field goals. 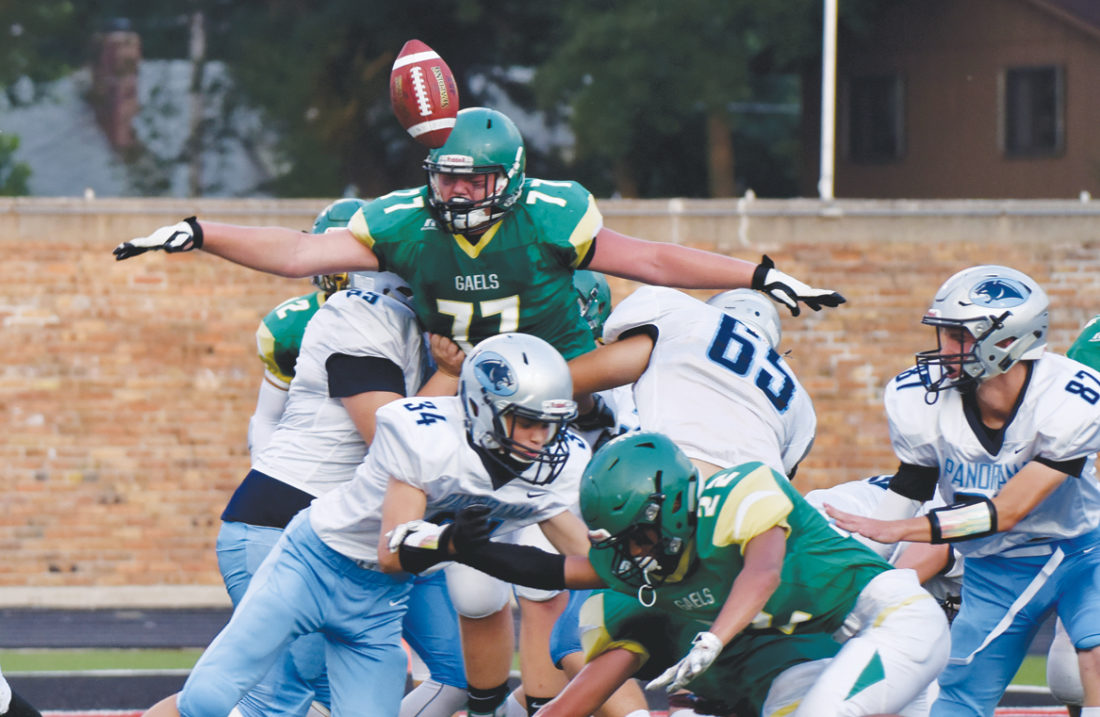 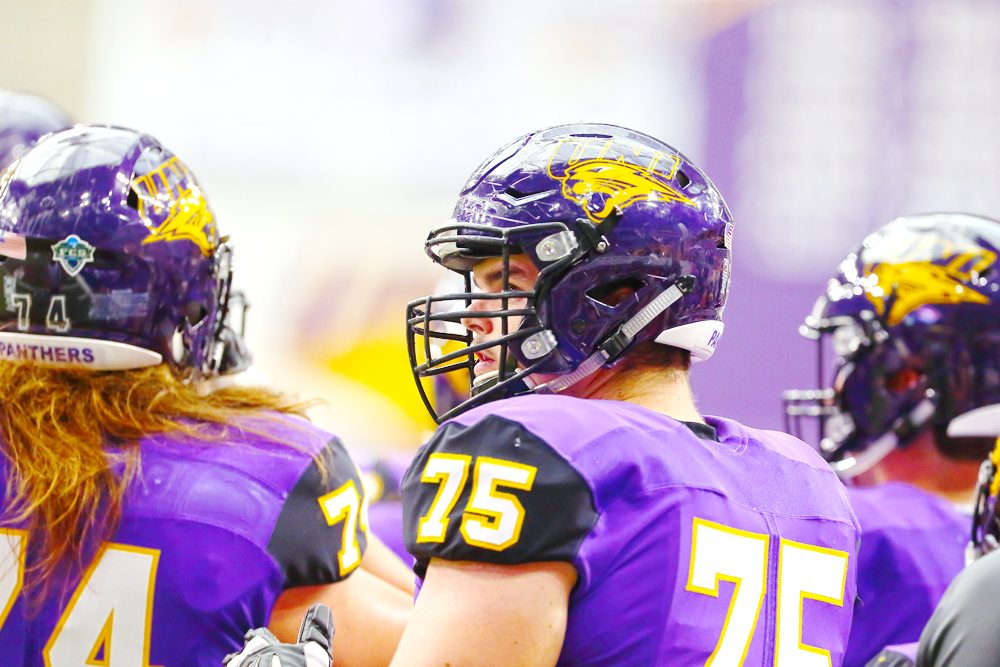 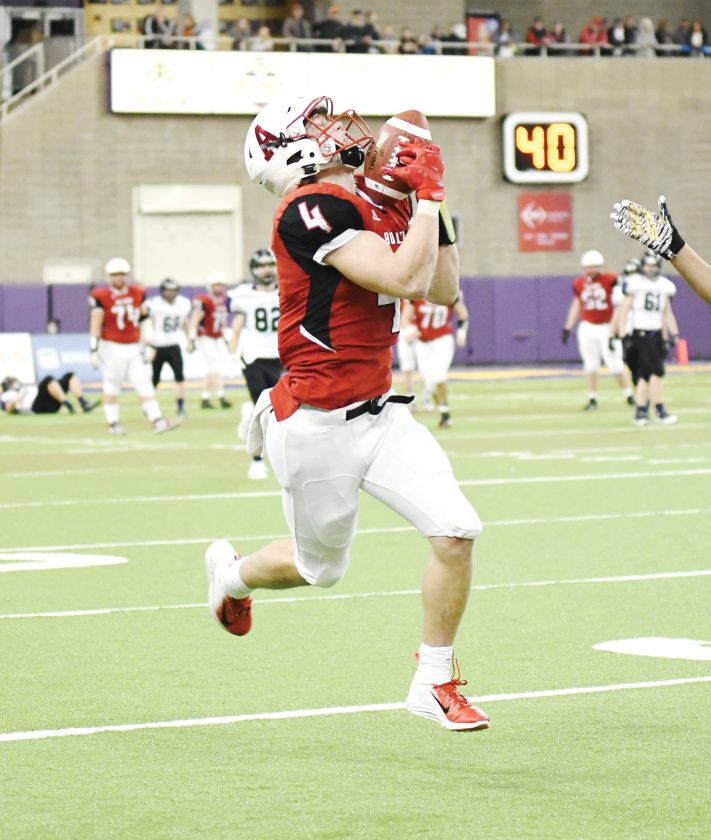 Messenger photo by Britt Kudla Wyatt Wegener of Algona makes a catch during a Class 2A state semifinal football game at the UNI-Dome in Cedar Falls earlier this month. 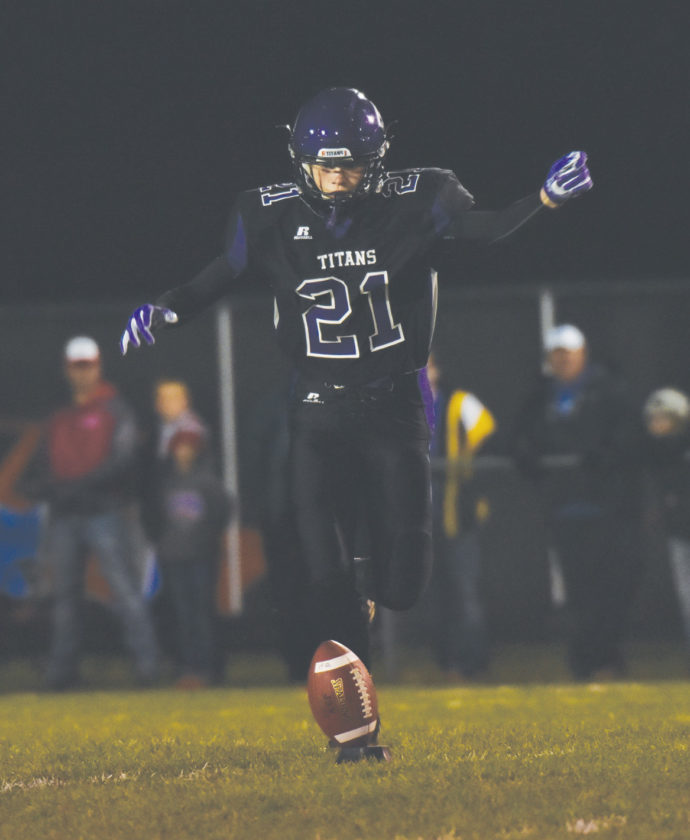