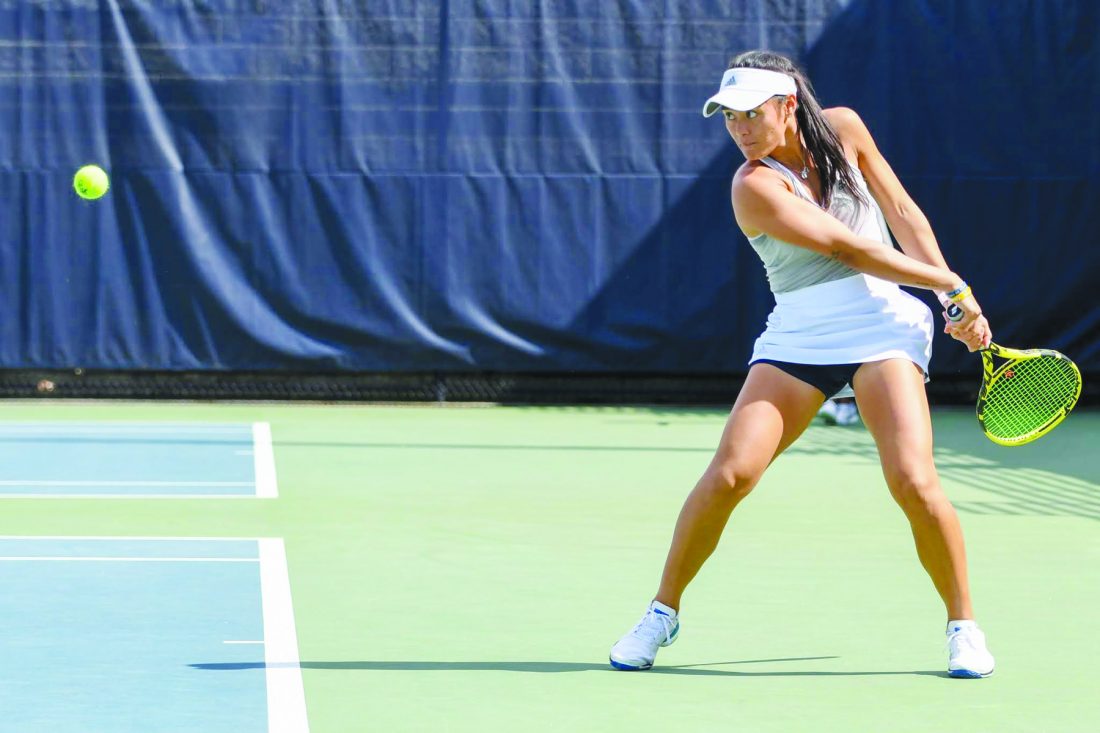 —Photo courtesy Georgia Tech Athletics vicky flores was in the middle of her junior season with the Georgia Tech women’s tennis team when the year was canceled. Flores went 20-7 in singles for the Yellow Jackets and was 20-3 overall in doubles, including a 15-1 mark while playing the No. 1 position.

ATLANTA — This was definitely not the way Vicky Flores saw her season with Georgia Tech tennis coming to an end.

Flores, a Fort Dodge native, was left shocked by the decision from the NCAA to cancel all remaining spring sports immediately in hopes of helping contain the spread of COVID-19.

“My initial emotions were so strong,” Flores said. “The upperclassmen, we all started just tearing up in the locker room and really felt the pain of how our season would end.”

Flores, a junior who grew up in Fort Dodge, she was able to take solace in the fact that she still had time to bond with two of the three seniors on the team.

“I live with them in an apartment, so we’ve had each other to get through this,” she said. “It’s funny because now that we’re in lockdown here in metro Atlanta, we quarantine together and are able to spend these last few months with each other.

“I’m grateful that we have each other to handle our season ending and their college careers ending on such a heartbreaking note.”

Flores picked up a win in singles over Nika Kozar from Virginia Tech in her final singles match, going 6-1 over her last seven in all. She finished the season 20-7 in singles.

In doubles, Flores went 20-3, winning each of her final eight matches with senior Kenya Jones. Flores and Jones were 15-1 playing the No. 1 doubles position for Georgia Tech, including a 7-0 mark against nationally-ranked teams and a No. 6 ranking.

“I was pretty happy with my personal improvements, but I owe that to my coaches and teammates because we all pushed each other to be our best every day,” Flores said. “That’s something I can be happy with even with the way the season ended because we truly gave our all in each practice together and especially in every match.”

The Yellow Jackets were 15-6 overall and 5-2 in the Atlantic Coast Conference. They finished with four wins against nationally-ranked programs and reached the ITA National Team Indoor Championships.

For the time being, Flores, Jones and senior Nami Otsuka are completing course work online to complete the semester, time that has been “special” in allowing them extra time to “practice and workout together.”

The sudden conclusion has left plans for the summer up in the air for Flores, as she was planning to remain in school and compete in pro tournaments. But since the decision was made, she has been able to digest it all a little more.

“It is honestly so heart breaking to say the least,” she said. “So many of my good friends around the U.S. are experiencing such a hard time, my heart and prayers go out to them. Nothing or no one can describe the way they feel about not properly ending their seasons or even careers. I feel so much for them.

“Now, though, I can firmly say that I do believe everything does happen for a reason and maybe this is a way for us all to take a step back and remember and focus on what is most important in life. It provides us opportunities to learn from this difficult time in all of our lives and realize if we are living the way we truly want to.

“One of my team’s No. 1 focuses this year was to be intentional, grateful for every day and leave everything on the court for each other, and that’s definitely what has let my team feel more comfort and love knowing we did that together.”