Decade of defensive domination by the area 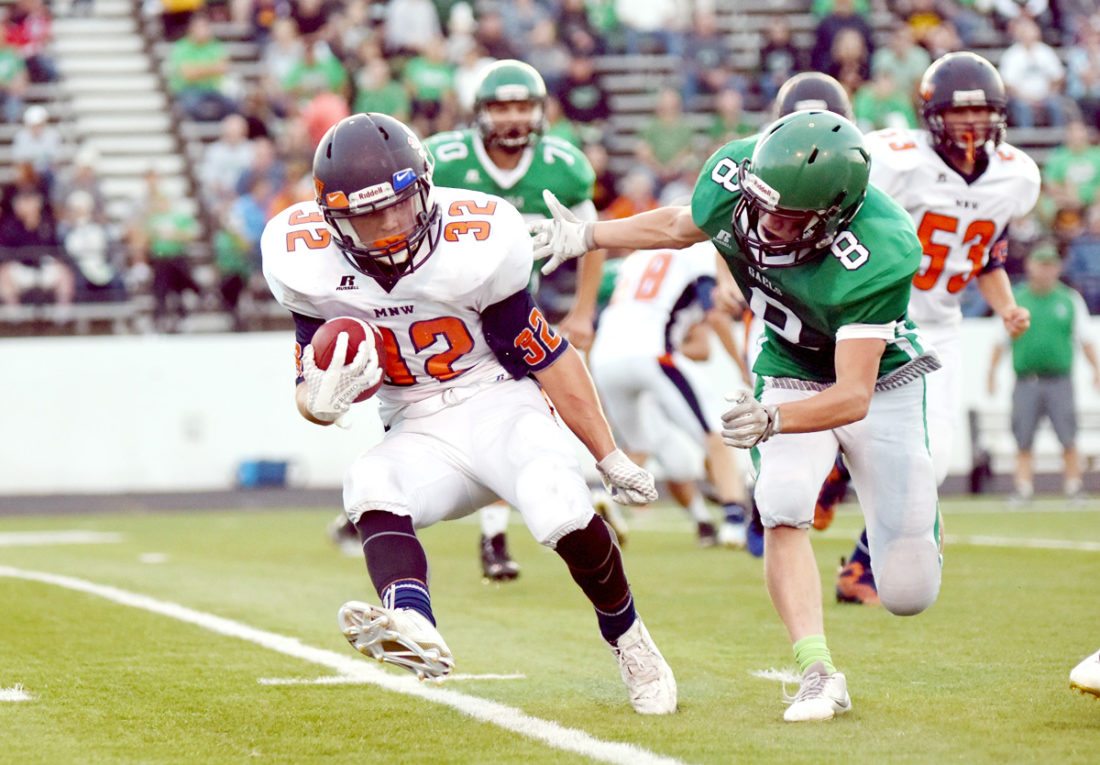 Messenger photo by Britt Kudla Reid Steinberg of Manson Northwest Webster tries to shake free from St. Edmond’s Jack Rasmussen last year at Dodger Stadium. Steinberg is one of nine starters back for the Cougars this season.

Everybody loves great offenses and high-scoring teams, but those that really made an impact on the Messenger area over the past decade did so on the other side of the football.

Since the start of the 2010 season and finishing up with this past fall, we have been witness to many incredible performances from defensive standouts. And of course, many of them were two-way players, lining up each Friday night for just about every single snap of every single game.

To be included for consideration on the all-decade team, players had to have graduated between the 2010-11 and 2019-20 seasons. Honorees are listed in the order of their graduating year. 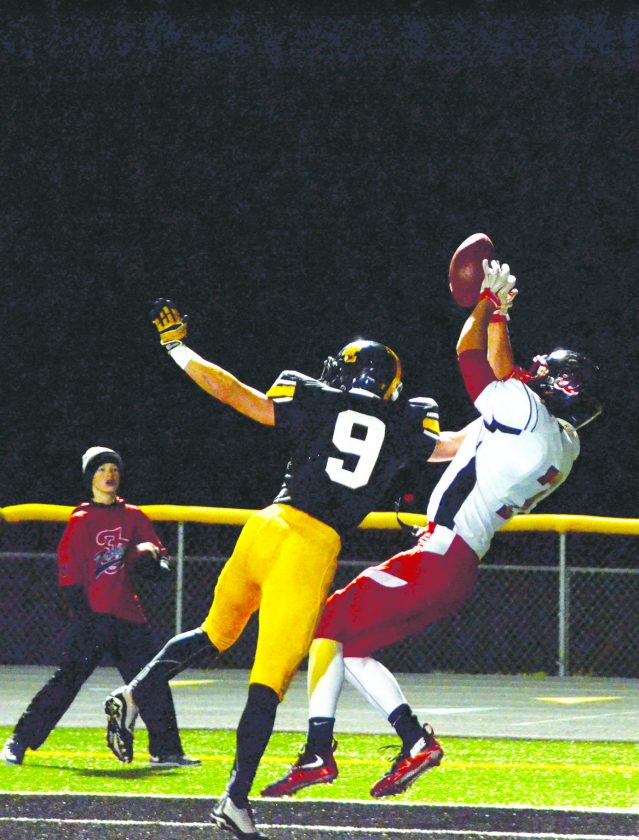 It was a senior season for the ages for Adrean Johnson in 2013, as the Dodger recorded a team-high 74 tackles.

Johnson also ranked among the Class 4A leaders with 17 tackles for loss, adding two sacks. He finished his career with 112 total stops.

As the Gaels made their march to a state championship game, the heart and soul of the team was Vinnie Harvey. 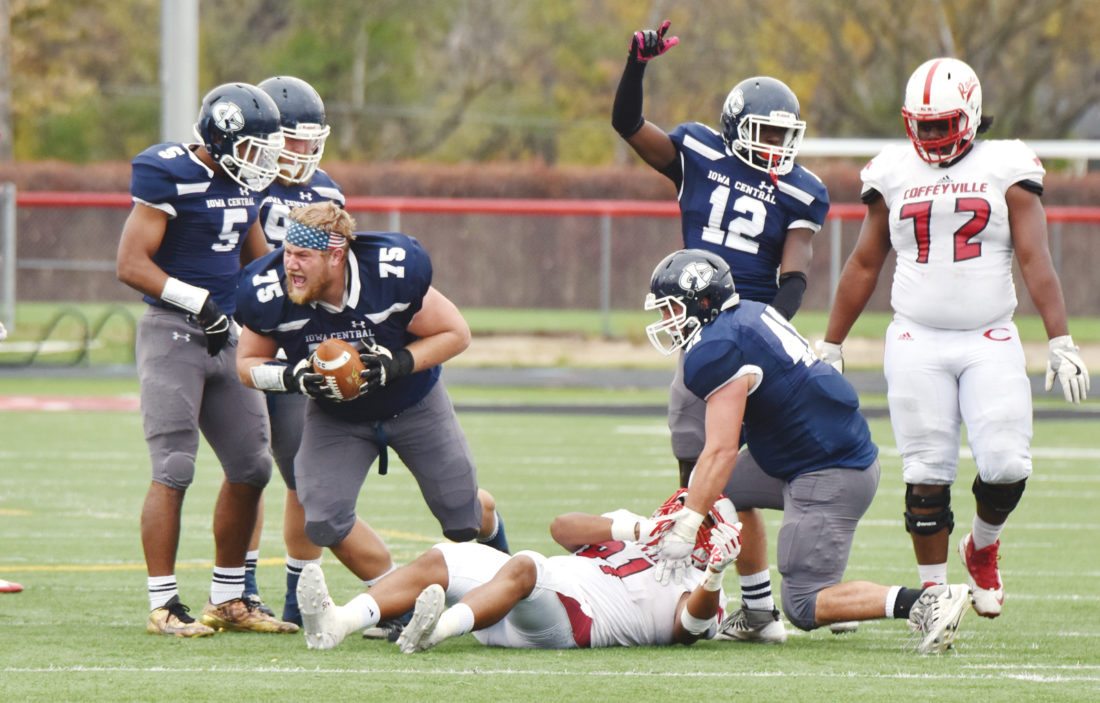 Harvey also ranks fourth on the school’s career rushing charts for yardage with 2,450 and is second with 43 touchdowns.

Before he was helping protect University of Iowa quarterbacks, Cole Banwart was terrorizing opposing teams. Banwart is an offensive lineman with the Hawkeyes, but he also shined on the defensive side.

As a senior, Banwart recorded 30 tackles with eight solo stops for loss, six assisted and four sacks. He picked up eight solo tackles for loss and a pair of sacks as a junior. 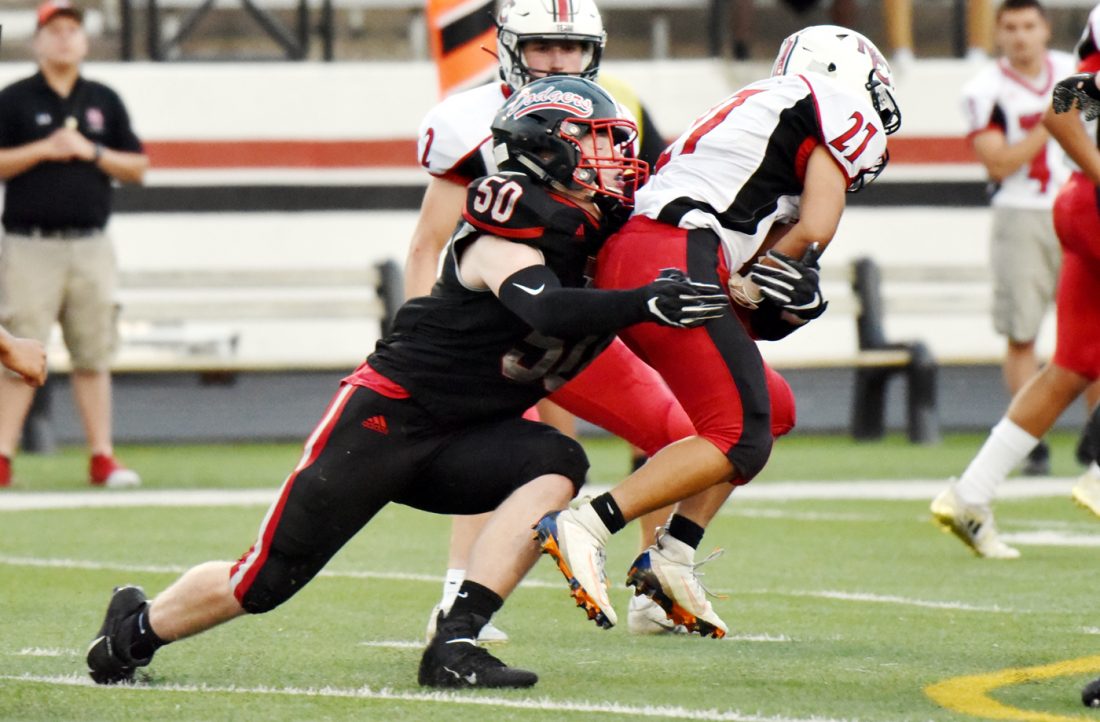 A force at both Iowa Central and Northern Iowa, Tim Butcher started his run with Manson Northwest Webster.

One of the top players in Webster City history, Gavin Dinsdale racked up four sacks as a senior while also leading the team with 1,958 yards rushing and 29 touchdowns.

In his final game as a Lynx, Dinsdale ran for 274 yards and scored three touchdowns. 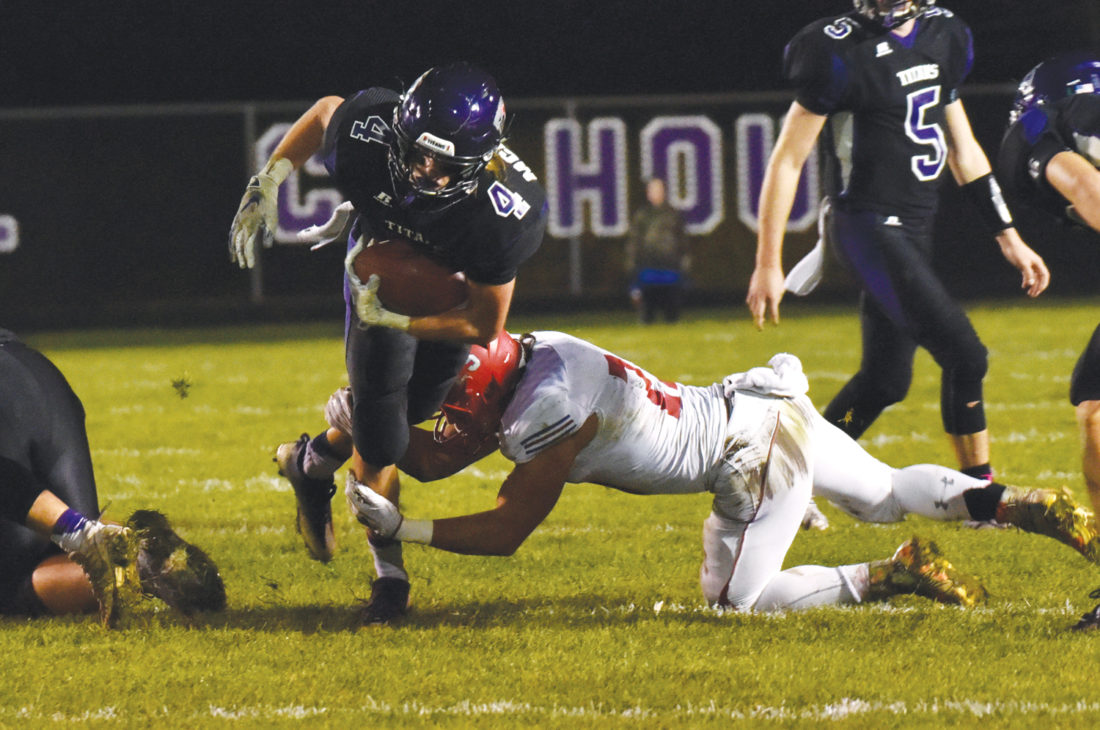 A dominating force on both sides of the ball, Tyler Jones made sure to contain offenses while working along the line for South Central Calhoun.

Jones finished his career with an impressive 75.5 tackle season, racking up 198 career stops. Like most, he also was a key piece on offense making holes and protecting the Titan quarterback.

The Buscherfeld name has remained constant for the Golden Bears over the past decade, with Drake Buscherfeld holding a spot along both lines. 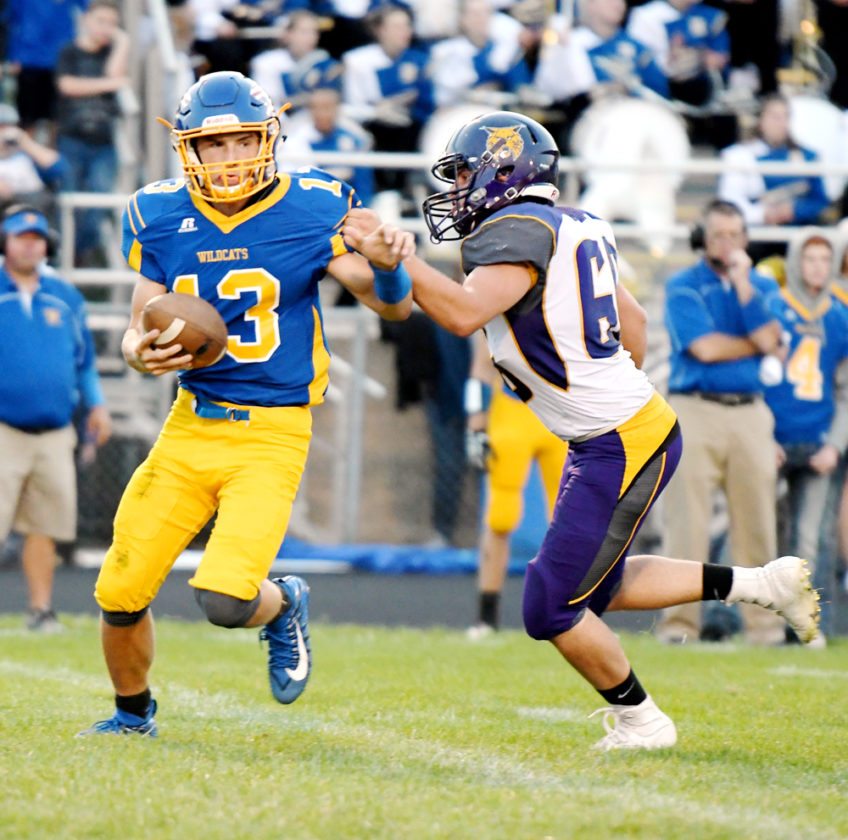 Photo by Troy Banning, for The Messenger Jamison Heinz of Humboldt tries to scramble away from trouble against Webster City last week.

Buschfeld finished his career with 132 tackles, including 54.5 during his senior season.

After waiting his turn in the rotation to join the vaunted Bishop Garrigan defensive line, Aidan Koob exploded in 2019.

Koob recorded 10 sacks from his position along the interior of the defense, adding 46.5 total tacks. He finished his career with 13 sacks and almost 60 stops.

An old-school player to the fullest, Neil Flattery hardly came off the field during his time in a Gael uniform. Flattery was a key piece on offense, defense and special teams.

At linebacker, Flattery recorded over 80 tackles and picked off six passes, including four as a senior.

He was also a workhorse on offense, finishing with the third-most yards in school history with 2,524 and scored 31 touchdowns.

Kirk Ferentz and the Iowa Hawkeyes knew they were getting a team-first player in Brady Ross following his strong three-year run with Humboldt.

In 2016, the Dodgers had a string of five consecutive games allowing eight points or less, including three shutouts in all. Cainen Hiracheta was the leader of that unit.

Hiracheta led the team with 60 tackles and 11 stops for loss. He also had highs with 52 tackles and 10 for loss as a junior for Fort Dodge.

Standing atop the state as a senior in 2016 in tackles for Pocahontas Area’s Danny Sommerlot, as he finished with 161 stops in all.

That included 118 solo tackles with a couple of fumble recoveries. Sommerlot also had 114 tackles as a junior and led the team with 86 the year before, finishing with 364 for his career.

As a junior, Jack Rasmussen recorded a state-leading 125 tackles, with 72 of those coming in the form of solo stops.

Rasmussen also led St. Edmond with 83.5 stops as a senior including five for loss and an interception. He had 224.5 tackles for his career.

During North Union games, it didn’t matter if the Warriors were on offense or defense, as Isaac Engeman was likely to be involved in the play.

Engeman finished his senior year with 1,261 yards passing and 16 touchdowns, 808 yards rushing and four scores, and made 127 total tackles on defense. He also recorded eight tackles for loss.

During his career, Engeman had 280 total tackles and scored 32 touchdowns.

This past season, Austin Lee took on the role of defensive leader for the Dodgers, helping the team reach the Class 4A state playoffs once again.

Lee racked up a team-high 63 tackles including 53 solo stops. Among those tackles were 17 for loss and three sacks, numbers that also led Fort Dodge.

Not many teams tried to pass on the Gaels while Landon Peed was roaming in the secondary, but when they did, Peed made them pay.

Along with his defensive numbers, Peed also ranks first in Gael history with 1,469 yards receiving and second with 61 catches and 18 touchdowns.

Making noise on both sides of the football for the Dodgers was Sam Kolacia for two seasons.

Kolacia had 80 career catches for 1,395 yards and 15 touchdowns, making 74 tackles on defense with nine interceptions. That included 871 yards receiving one season and five picks in another.

In his senior season, Zac Kibby was the quarterback of both the Golden Bear offense and defense, leading them to 11 wins. Kibby made 55.5 tackles and picked off a pair of passes while also handling punting, kicking and return duties.

All of that caught the attention of Mark Farley and Northern Iowa, where Kibby currently plays. He was also the leading receiver for Bishop Garrigan as a junior and made 41 more tackles.

From his safety position on the Lynx defense, Dylan Steen recorded 19 interceptions. That included seven as a senior, one of which he returned for a 96-yard touchdown.

Steen picked off a state-leading 10 passes as a junior, taking two back for scores. He was also the starting quarterback for Webster City.

As a junior, Chase McAlister was a ball-hawking member of the Titan defense. He picked off nine passes, returning three for touchdowns to go along with 31.5. tackles.

Over three years, McAlister picked off 14 total passes and made 95 stops.

No matter what the Wildcats needed, Jamison Heinz always delivered. Heinz averaged almost 27 yards per kickoff return as a senior, including an 80-yard touchdown, while also taking a punt back 78 yards for a score.

That season, he ran the ball 167 times for 1,134 yards with 13 touchdowns and made 62.5 tackles on defense. As a junior, Heinz led Humboldt in receiving and returned four kickoffs and a punt back for TDs.

Before he was earning All-America honors for Iowa Central, Mitch Bonnstetter was controlling the punt game for West Bend-Mallard.

Bonnstetter finished second his senior season in the state, averaging 46.5 yards per kick with a long of 65. He also threw for 880 yards with eight touchdowns and ran for 1,404 with 28 that season.

In 2013, no one was better at pinning the opposition back than David Flattery as the Gael led the state at 46.5 yards per punt. He had a long of 69 among his 32 kicks that year.