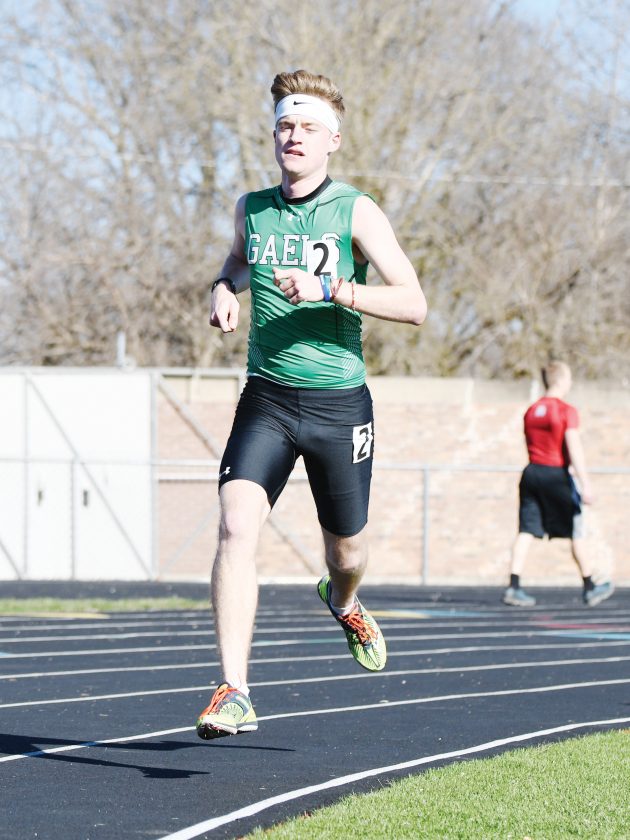 The spring sports season typically has to deal with uncertainty.

Between constant threats of rain, wind and even chilly temperatures, teams are constantly scrambling to get events and meets in.

This year, though, the problem centers around just getting the track, soccer, tennis and golf seasons going for athletes at St. Edmond and virtually everywhere.

Both the Iowa High School Athletic Association and Iowa Girls High School Athletic Union, announced they would suspend all activities in the state in an attempt to limit the spread of the novel coronavirus (COVID-19). The hope is that in mid-April, practices will be able to begin for athletes.

Jed Tracy, a senior on the Gael track team, understands the uncertainty will continue into the immediate future.

“We don’t want to gamble and say there isn’t a season and not train, because anything can happen,” Tracy said. “The virus could magically end tomorrow or it could be 30 years from now, we don’t know. We just know that if we keep working, good things will come one way or another because ultimately, everything happens for a reason.”

Tracy admits that the initial decision had his feelings “all over the place.” The school is currently on its planned spring break.

“It didn’t really hit at first, but with this time to myself without worrying about school, I’ve had more time to (process the delay) and all I’ve thought about is this track season,” he said. “The amazing part about running is that you can run everything off of your mind. I couldn’t wait to get to track and run off all the regrets I’ve had at every practice. But to know that we may not have a track season ultimately breaks my heart — not just for myself, but for my teammates and coaches.

“To know that everything that we have been doing could (result in) no meets — it truly leaves a dent in my heart at the moment.”

Ethan Lursen remains hopeful for a senior soccer season. A student at St. Edmond, Lursen will suit up for the Dodgers on the pitch.

“I am extremely excited,” Lursen said. “I’ve been putting in a lot of hard work for the past three years and I want to see how my senior season plays out.

“I am 100 percent for pushing the season back into the summer.”

Lursen was a key member of the Fort Dodge team last year. He also played football and basketball for the Gaels.

“Knowing that your sport or someone else’s sport could be canceled due to the virus is something that was not called for or anything any of us wanted to happen,” Lursen said. “We are all hopeful that we can still have our seasons.

“For the past two months, we have been having open gyms against each other, reworking old skills and building new ones. Between basketball and now soccer, we have been hard at work in the weight room getting bigger for the year.”

The daughter of Iowa Central president Dan Kinney, Rylee Kinney watched closely as Triton athletes felt the pain of losing a season first-hand. She is a senior for the SEHS golf team.

“I am thankful that the IGHSAU only postponed the golf season so far,” Kinney said. “I’m hopeful that I’ll still have a senior year. It’s hard to hear about the athletes who have put in so much time and effort, only to see their season come to an end.”

Kinney, who will play for Iowa Western next year, averaged a 45 over eight nine-hole tournaments last year and an 89 over four 18-hole events. Her low scores were 40 and 85, respectively, as a junior.

“I’ve been working out all winter,” Kinney said. “I’m hoping that the weather starts to warm up so I can get out to the golf course and start playing on my own.”

Maggie Lennon, a junior for the St. Edmond tennis program, is actively involved in numerous activities at the school.

“I will be pretty disappointed if there ends up being no tennis season at all. However I would rather miss out on a season than be involved in causing the spread of illness,” Lennon said. “It has been tough seeing how many people are missing out on doing the things that they love. It is especially hard to see careers cut short for seniors.”

The decision by Iowa’s two governing bodies includes keeping coaches away from their student-athletes, which worries Lennon.

“I have been on a trip while all the cancellations have been made, so I haven’t tried to prepare on my own as of yet,” Lennon said. “It will be hard to get ready for a sport like tennis on my own. I can exercise, but skills and techniques come easiest from actually playing.”