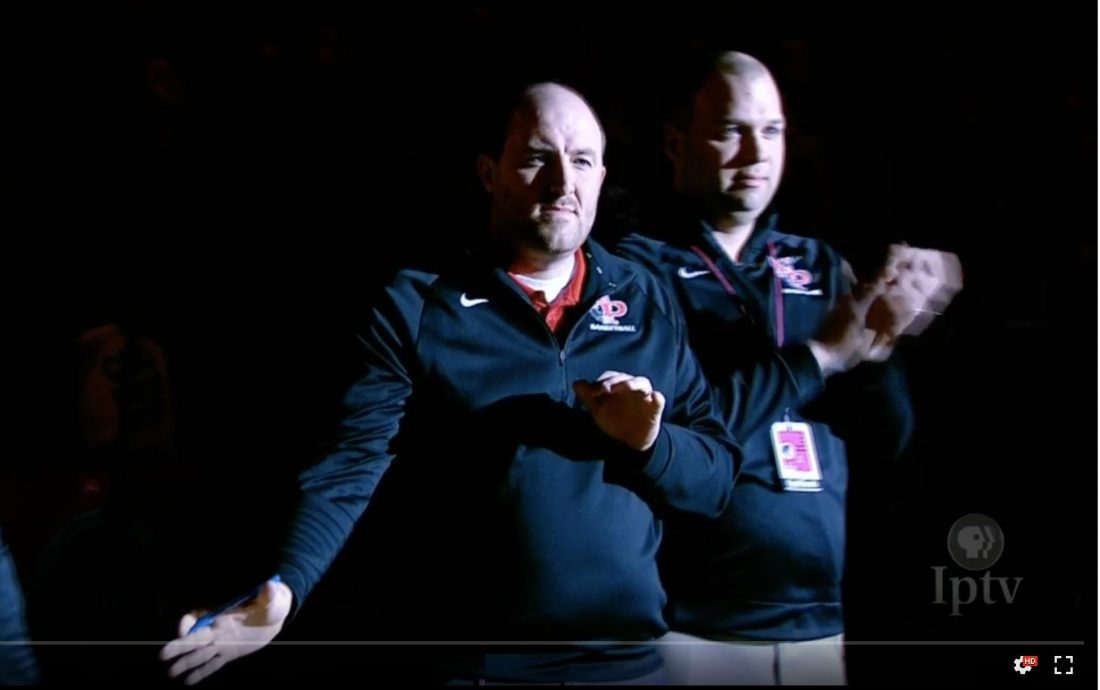 —Submitted Photo Alex Bollmeyer, a graduate of Twin River Valley, is in his third season as an assistant coach for the North Polk girls. The Comets play in the Class 3A state tournament Monday in Des Moines.

ALLEMAN — A little piece of Twin River Valley High School will be at the girls state basketball tournament beginning Monday in Des Moines.

Alex Bollmeyer, a graduate of the now consolidated school, is in his third season as an assistant coach with North Polk. The fifth-ranked Comets (19-5 overall) meet Red Oak at 6:45 p.m. from Wells Fargo Arena in the Class 3A quarterfinals.

Bollmeyer, who graduated from TRV in 2004, was a four-sport athlete for the Thunder playing football, basketball golf and baseball. His coaching career brought him back to Twin River Valley, as he spent two years coaching baseball at the school and at Corwith-CWL.

He was also the head boys basketball and golf coach at Schaller-Crestland before landing at North Polk where he teaches high school math. Bollmeyer has also coached middle school basketball and football in the district.

Twin River Valley reached the girls state basketball tournament in 2006 and advanced to the semifinals, six years before the school closed. Twin Rivers reached state five times, the last of which was in 1970.

“We’ve been lucky at North Polk to have a great group of girls who have also put a lot of time into basketball over the years,” Bollmeyer said. “They’ve just committed time to playing the sport and developing their skills, especially outside the season. Our girls play quite a bit of AAU ball during the spring and summer, So they’ve put in the work and effort to give themselves an opportunity to be successful.

“And our community really supports our girls and our program, and really all programs at North Polk, which helps out tremendously. When our program runs a fundraiser or event, we get incredible turnouts, which in turn provides great opportunities for our girls. For example, each year we are able to bring in a three-day camp run by college coaches in our gym that ends up being free of charge for our players off the fundraising our community supports.

“Then just the support we get throughout the season is great as well. The past two seasons down at the state tournament, our side of the arena is packed. It was amazing for me to see the amount of people who came to cheer on our team the past two seasons.”

With this being his third state trip from the sidelines in three seasons, Bollmeyer is becoming familiar with the atmosphere.

“I’m really looking forward to it,” Bollmeyer said. “It’s an incredible experience. Even the week off leading into state is fun because we get to spend another week with the girls practicing and celebrating the season we’ve had while preparing.

“And once you are at Wells Fargo Arena, the Iowa Girls High School Athletic Union treats the girls and teams like a big deal. They make it a memorable experience for the girls with souvenirs and keepsakes, and by allowing us to play in an arena. Also, they provide coaches with free popcorn, which is a big deal in my book.”

North Polk has reached state each of the past three seasons, posting a record of 64-12 during that time. They advanced to the championship game last year.

“It’s fun as a coach to watch your team have success,” Bollmeyer said. “Our girls put in quite a bit of time and effort all year, so it’s exciting to watch them get rewarded for that because that’s not always the case in sports.

“Teams can put incredible time and effort in and not get rewarded as much as you’d like or expect. Injuries can dampen potentially great seasons. An off-night in tournaments can end a season earlier than you’d wish or your opponent having a great night. We’ve been fortunate to catch some breaks the past couple years to have some great regular season and postseason success. It’s been a fun three years for me on staff.”

The Comets are led by Drake University-recruit Maggie Phipps and Jaedon Murphy. Phipps, a junior, averages 16 points per game and has a team-high 56 made 3-pointers.