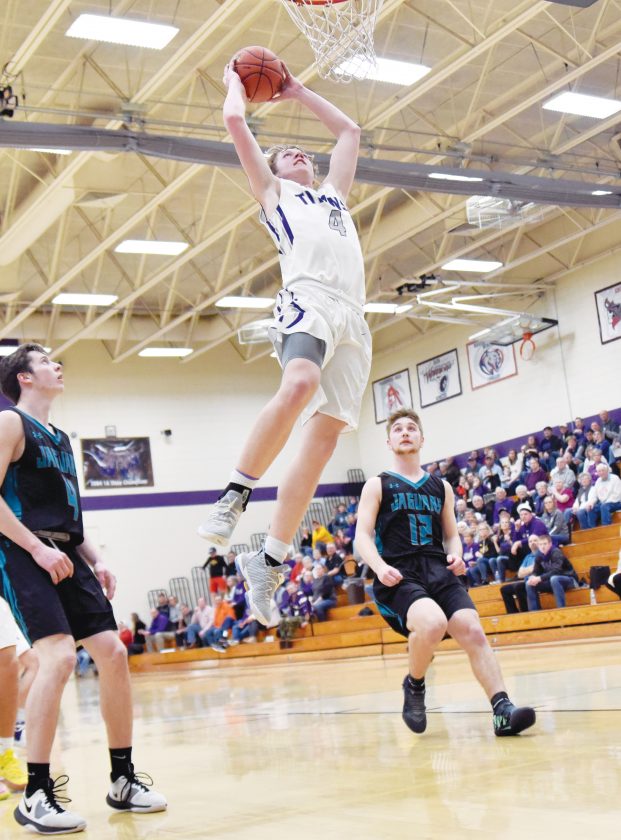 Messenger photo by Britt Kudla Zane Neubaum of South Central Calhoun goes up for a dunk against Southeast Vallley in Rockwell City.

The 2019-20 basketball season saw several incredible individual performances from around the area.

But the one intangible all six members of the Messenger’s all-area boys basketball team displayed was a desire to help their respective schools succeed at an elite level.

Winkel and Joyce helped the Golden Bears reach the Class 1A state tournament, advancing to their first-ever championship game. Neubaum was the key piece to a run to the substate finals for the Titans, while Schroeder, Wegener and Jungers combined to help their squad win 52 games.

Coming off a sophomore season in which he helped get the Golden Bears to the Class 1A state tournament, Angelo Winkel continued to show his growth on the court.

The 6-foot-9 junior was an imposing figure in the paint, shooting 58 percent from the field and averaging almost 19 points. Winkel also stepped outside, knocking down a dozen three-pointers to go along with 270 rebounds, 63 assists, 45 blocks and 15 steals.

Winkel scored a high of 37 points in a January win over North Iowa as he surpassed the 1,000 mark for his career the same night as his brother, Cade Winkel, accomplished the feat.

Battling through an injury, Zane Neubaum carried over the success he had as a junior to his final season on the hardwood with South Central Calhoun. Neubaum averaged a Twin Lakes Conference-leading 25 points per night, shooting 57 percent from the field and 80 percent at the free throw line.

Neubaum, a standout on the football field for the Titans, helped get his team to a substate final. He added 72 steals, 47 rebounds and 46 assists to his final stat line.

In a January win over Humboldt, Neubaum scored 40 points, making 13 of 20 shots from the field and 12 of 14 at the line. He also recorded 11 steals in the performance.

After showing signs of a breakout season as a sophomore, East Sac County’s Camden Schroeder took over this past winter. The 6-foot-5 junior led the Twin Lakes Conference with 517 points and 216 rebounds.

Schroeder was nearly unstoppable from the field, shooting 62 percent, including 44 percent from the 3-point line and 84 percent at the free throw stripe. He was far from just a scorer, though, dishing out 64 assists with 52 blocks.

During the year, Schroeder scored a high of 37 points against Pocahontas Area and had a 28-point, 16-rebound performance in a win over TLC champion South Central Calhoun.

Fresh off an award-winning season on the football field, Wyatt Wegener showed he could also be a force on the basketball court when healthy. Wegener averaged 17 points per night for the Bulldogs to lead.

Wegener, who is headed to the University of Iowa to play football, finished with 400 points on 51 percent shooting from the field. He also had 135 rebounds, 71 assists and 39 steals.

In a 56-50 February win over Hampton-Dumont, Wegener exploded for 30 points. He reached double figures in each of the last 18 games of the season.

A Coe College recruit, John Joyce served as the floor leader for Garrigan this past winter, helping lead the team to a runner-up showing in Class 1A and a Top of the Iowa Conference title.

Joyce averaged just under 14 points, shooting 50 percent from the field with 94 assists, 74 rebounds and 40 steals. He was also strong at the line, sinking 76 percent of his free throw attempts.

Joyce scored a high of 25 points during the regular season and had 17 points and four assists in a semifinal win vs. West Fork inside Wells Fargo Arena.

The basketball gene definitely carried over to Trey Jungers, as the son of Newell-Fonda head girls coach Dick Jungers made an instant impact this past season. The 5-foot-11 guard averaged 13 points while dishing out 86 assists with 66 steals.

Jungers scored a season-high 23 points this season in a 93-89 victory over Sioux Central in which he also recorded six rebounds, four assists and two steals.