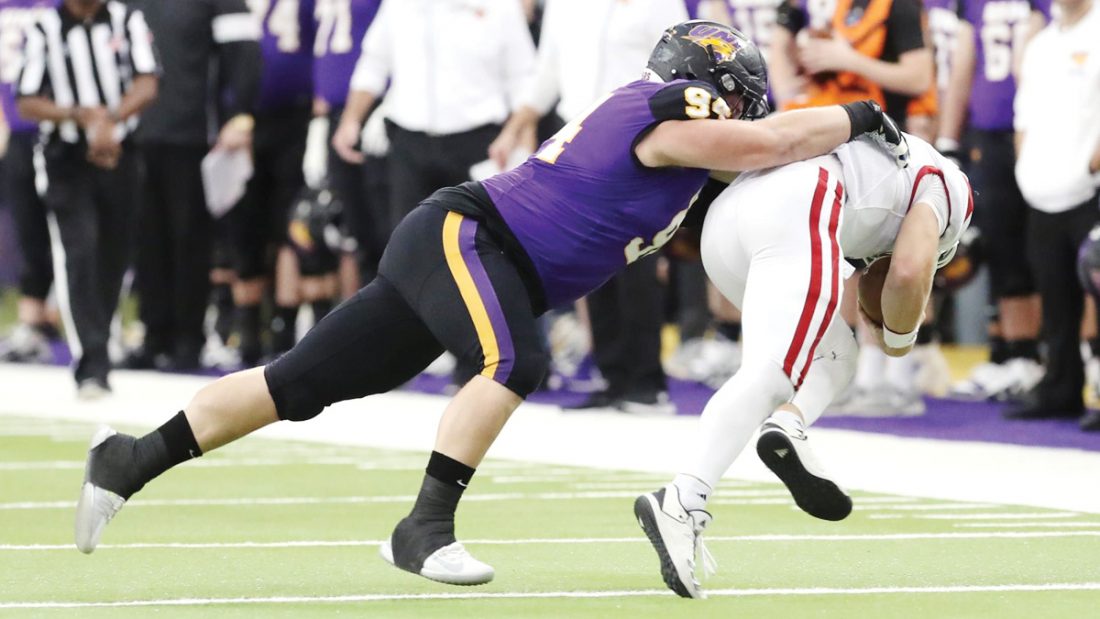 CEDAR FALLS — Whether it was on the farm or lifting weights, Tim Butcher was usually the strongest man in the room.

Growing up on a farm in Palmer, Butcher became country strong, working in the hot summer sun on the family’s acreage. Baling hay was his summer workout routine — one he enjoyed while helping his family with the chores.

“To be honest, I’ve been lifting ever since I could bale hay in the summer or pick rock up in the fields for my dad,” the ex-Manson Northwest Webster all-stater said.

Once he picked up a dumbbell, the passion grew and meshed well with Butcher’s natural work ethic.

“The first time stepping into the high school weight room (at MNW), I was in eighth grade,” Butcher said. “Coach (Jeff Anliker) had open lifiting at 6 a.m.

“In the mornings, my buddy Jackson (Johnson) and I were the only two eighth graders to show up for every session.”

“He came in (as an eighth grader) with a strong farm work ethic,” Anliker said. “He wouldn’t miss a day in the weight room, but would go after weights and bale hay all day with his dad, too. Tim was never afraid of hard work.

“Tim was a strong kid from the start because of that, but he still worked harder than most to be better. He had some natural ability that some kids would say was good enough, but Butch always worked hard to improve his strength and take it to another level.”

On the field as a redshirt junior for the University of Northern Iowa football team in 2019, Butcher — a two-time all-stater for MNW — was an asset on the defensive line. He had 37 tackles from the interior in 15 games played. The former Iowa Central standout also recorded 10 tackles for loss.

“Getting even stronger in the weight room has helped me become more productive on the field,” Butcher said. “Our strength and conditioning staff is second to none. Jed (Smith), Kane (Thompson) and Frank (Romananazzi) are the best at what they do, and a lot of our success in the fall is because of what they put us through in the offseason.”

Butcher took his lifting talents to a new level recently, as he set a new defensive line and Northern Iowa program record for both bench press (470 pounds) and squat (700).

Before committing to Northern Iowa, Butcher had a two-year career with the Tritons. In a productive sophomore campaign, he accumulated 74 tackles.

“My first spring here in 2018, after transferring from Iowa Central, I thought I was at a peak in the weight room. Then I got here and realized I had so much more to learn and progress to make,” Butcher said. “Through Jed’s crazy winter workouts I added 50 pounds onto my squat and did 640, beating the old defensive line record.”

With the nation in the midst of a novel coronavirus pandemic, Butcher and most athletes have found creative ways to keep active.

“With this whole pandemic, trying to get a good workout session in and replicate what we do in the (UNI weight room) — that’s not easy,” Butcher said. “We threw together a power rack, flat bench and a bunch of free weights and dumbbells in a garage, and I’ve just been using that.”