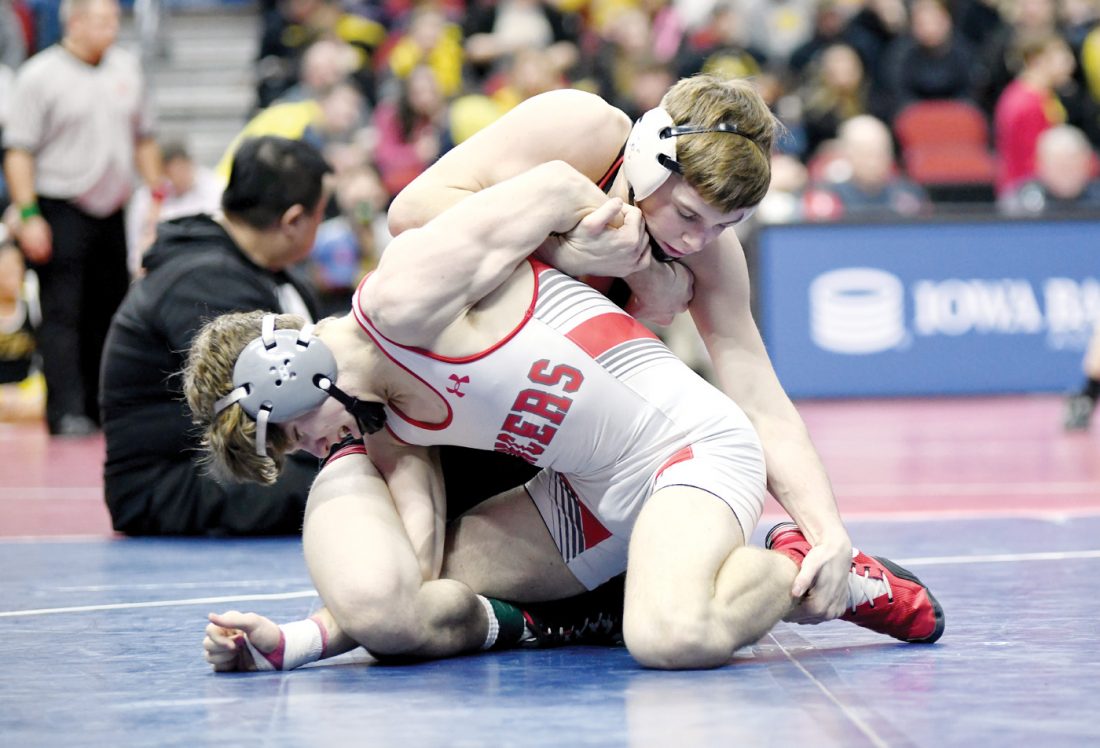 Messenger photo by Britt Kudla Fort Dodge's Brandon Mills competes against North Scott at state duals in Des Moines. Mills, a senior who placed sixth at 145 pounds this past season, has committed to Morningside College.

Fort Dodge’s Brandon Mills enjoyed a breakout season on the mat this year, and he will continue his career collegiately with a key ingredient to his success by his side.

Mills will continue his education and wrestling career at Morningside College in Sioux City, joining one of his friends and training partners in FDSH graduate and current Mustang wrestler Jonah Egli.

Mills burst onto the scene in his final season, helping lead the Dodgers to a third-place finish at state duals and a bronze in the traditional state tournament. He placed sixth individually at 145 pounds.

Mills gives a lot of credit to Egli, who was an NAIA national qualifier for Morningside as a junior.

“Jonah is the one that got me started on really lifting and running the way I needed to,” Mills said. “That’s what helped me achieve what I did this year and become a better wrestler because of it.

“I’m glad that I get to be his teammate again.”

Mills is also classmates and friends with Jonah’s younger brother, Levi. The Egli family has been a big part of Mills’ career and development.

“I’ve known Levi for nearly my whole life. We both started wrestling at the age of four, and his family is pretty much my second family — as mine is to him,” Mills said. “So I’ve obviously become close with all of his other six siblings, and both Duke (Egli) and Jonah have taught me a lot of wrestling — whether they’re in my corner (for support) or just practicing between Levi and I.”

Morningside was a perfect fit for Mills, who posted a 34-14 overall record this past season. Mills was ranked eighth heading into the state tourney at 145.

“The (Mustang) coaching staff was definitely a huge part in my decision. They’ve been very good to me,” Mills said. “I feel the campus is just the right size for me, the location is very comfortable, and I’m familiar with it since my family is from Sioux City.

“I got along great with my (future) teammates when I visited and they made me feel welcome.”

Mills had a storybook ending to his career. He defeated University of Iowa recruit Colby Schreiver twice.

Only twice in 48 matches this winter — against University of Wisconsin recruit Joseph Zargo of Bergen (N.J.) and Scott Robertson of Millard South (Neb.), who ended up a state qualifier at 152 — did Mills allow bonus points in losses.

Through his rise, Mills had a lot of people that were in his corner.

“I have to go all the way back and credit Troy Bennett for being a great youth wrestling coach,” Mills said. “I’ve been very fortunate to put in the work every week with great coaches like Carl Valley and Justin Faiferlick. During the offseason, I’ve been lucky enough to work out and train with my father (UFC legend Matt Hughes) and Max Askren.

“I also want to thank (Fort Dodge coach) Bobby Tompson and (assistant) Tanner Utley, along with all the Fort Dodge coaches for helping me become better. And, of course, my mom (Brandy) has always been there for me through everything.”