Merrill, Mott are the ‘fighting couple’

—Submitted Photo steven merrill (left) and jordan mott (right) are both MMA fighters who train at Faiferlick Martial Arts under Justin Faiferlick. The two have had numerous bouts over the years and are currently engaged.

—Submitted Photo Steven Merrill is a member of Faiferlick MMA who grew up in Rockwell City.

—Submitted Photo Jordan Mott is a member of Faiferlick MMA.

—Submitted Photo Steven Merrill proposed to Jordan Mott following his most recent win inside the cage. The couple train at Faiferlick Martial Arts under Justin Faiferlick. 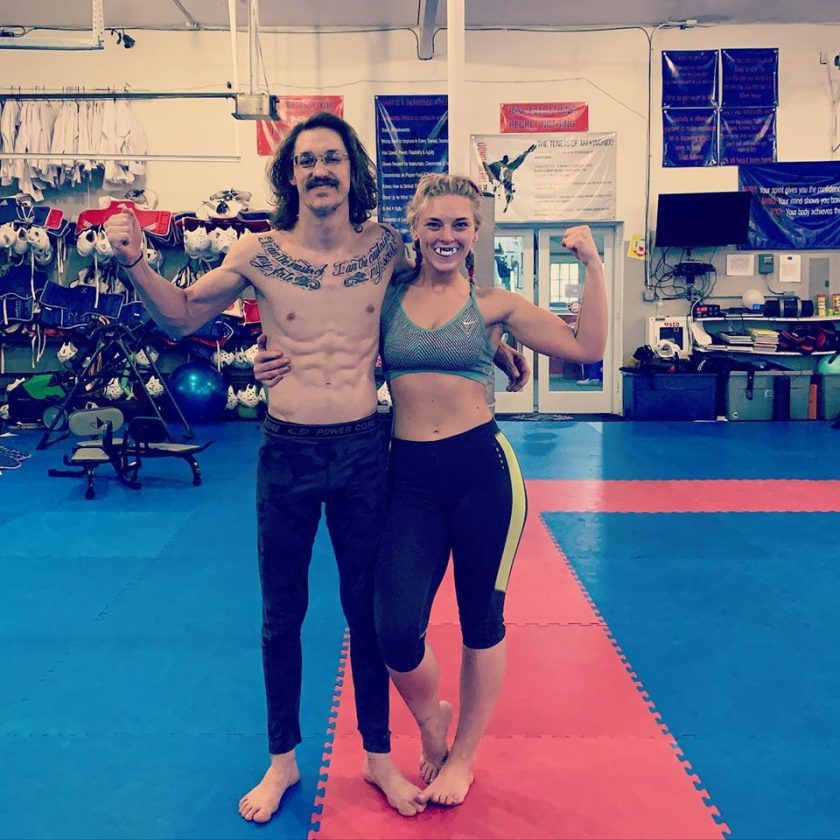 —Submitted Photo steven merrill (left) and jordan mott (right) are both MMA fighters who train at Faiferlick Martial Arts under Justin Faiferlick. The two have had numerous bouts over the years and are currently engaged.

Steven Merrill was born some 1,700 miles from Rockwell City, but found it to be his home from an early age.

Jordan Mott moved to Lytton from Lander, Wyoming after her sophomore year of high school, graduating from South Central Calhoun.

Different paths were taken by both, but somewhere along the way, they crossed with one another.

Merrill and Mott, who now reside in Fort Dodge, are mixed martial artists under the guidance of Justin Faiferlick at Faiferlick Martial Arts.

And so much more. 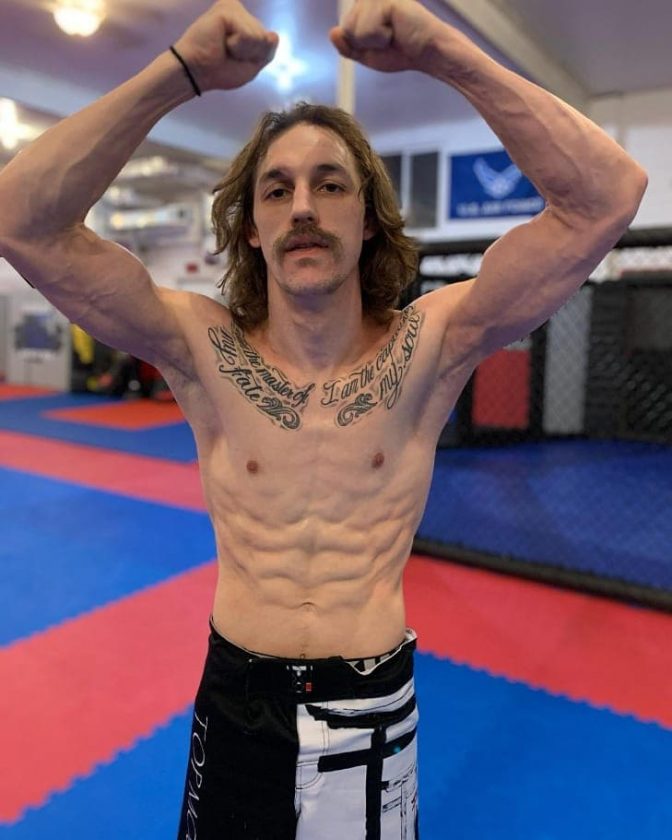 —Submitted Photo Steven Merrill is a member of Faiferlick MMA who grew up in Rockwell City.

Merrill graduated from Rockwell City-Lytton in 2008 and wrestled for the program, winning a Twin Lakes Conference title and competing in over 70 matches. He admits, though, troubles got the better of him while in high school.

“I made a lot of mistakes when I was younger,” said Merrill, who started wrestling under Keith Kraft at five years old. “I might have been able to achieve more had I not.”

Years later he returned to what had become the South Central Calhoun wrestling room seeking to help head coach Lance Schultz prepare his team when a chance encounter steered him back towards MMA.

“I met Jason Pochynski and found out he was in the MMA ‘game” so to speak,” said Merrill, who competes in fights without actually training as early as 2009. “About once a week, we would put on boxing gloves, shin-guards, a mouthpiece, a cup and just spar for 30-or-40 minutes. Then, Mike (Helle) and I would wrestle and look to submit each other for over an hour.”

Merrill took on a handful of bouts after that before he heard about Faiferlick’s gym. 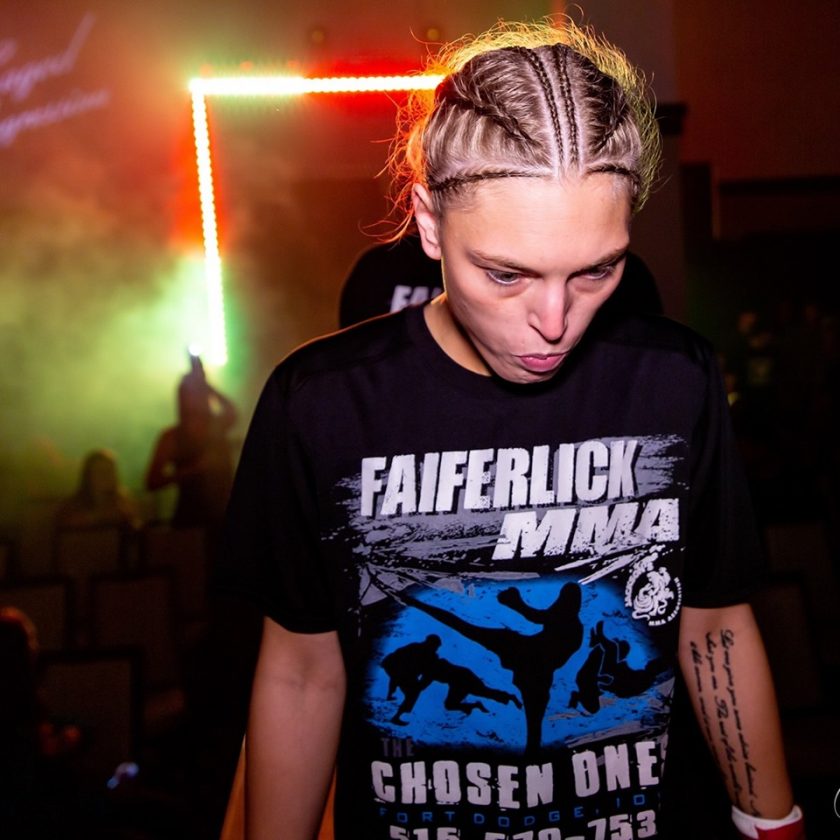 —Submitted Photo Jordan Mott is a member of Faiferlick MMA.

“I started actually training in the summer of 2015 and had my first fight under Justin in June of the next year,” Merrill said. “I won an amateur title at 135 pounds for Rick Tasler’s promotion in my first fight ‘back’ and have been with him ever since.”

Like Merrill, Mott was a standout athlete, but struggled to find self-confidence after moving to Iowa.

“My athletic achievements were very good in middle school and high school in Wyoming,” she said. “I was in volleyball, basketball and track, and I performed exceptionally well in basketball, holding the record for most 3-pointers made in a single game in eighth-grade.

“But I didn’t play sports for South Central Calhoun. I was very shy and wasn’t sure I would fit in on the team. I always wanted an athletic career, but I thought that was taken away from me when we moved.”

While there are several MMA “power couples” that first met at the gym, Merrill and Mott are not one of them. 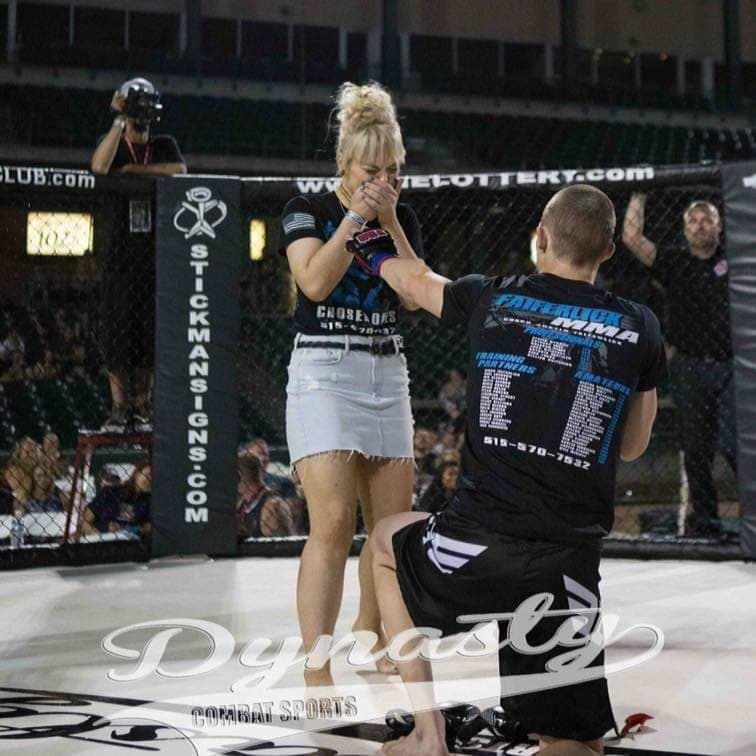 —Submitted Photo Steven Merrill proposed to Jordan Mott following his most recent win inside the cage. The couple train at Faiferlick Martial Arts under Justin Faiferlick.

“We were at a friends’ house and we automatically had a connection,” Mott said. “We talked most of the night, almost forgetting our other friends were around us.”

Shortly there after, Merrill confided in Mott his dream of competing.

“There was a quiet moment between us and Steven turned to me and said, ‘I just want you to know. I want to be a MMA fighter. I know I can do it. I really enjoy it and I still want to purse it.’

“That that time, I only knew it as a ‘bloodsport’ and, for me, it wasn’t nearly as female inclusive enough at the time. I reacted with encouragement, but I thought it was dangerous and I didn’t know how I could even watch it.”

Being the supportive partner she was, Mott began taking an interest in the sport and admits she “actually started enjoying it.”

“I was picking out my favorite fighters,” she said. “Once I graduated, I told Steven that he put me through school and I wanted him to chase his MMA dream. I went to work full-time while he trained.”

Staying busy, Mott found herself feeling as if she was “going through the motions” when the couple decided to watch Ronda Rousey defend her UFC title against Holly Holm in 2015. An epic bout for the sport and female MMA, it would also be a turning point for Mott.

“Steven and I sat down after I got off work and put on the fights,” she said. “I watched Holly dance around the cage, looking free, moving around like a gazelle. I was in awe. I couldn’t get her performance out of my head.

“The next day (Holm knocked out Rousey in the second round) I couldn’t stop thinking about it. All I could think was ‘that’s who I want to be when I grow up. That feeling. The athleticism. I want that.”

Mott first started getting back into shape before stepping into Faiferlick’s alongside Merrill.

“It’s our second home now,” she said of the gym. “We love everyone there. Justin has taken us so far in our careers that we wouldn’t be where we are now without him. If it wasn’t for MMA, I wouldn’t be a personal trainer, I wouldn’t be able to be a career athlete. I’m slowly working my way through the sport and really working towards success.”

Merrill called Faiferlick his “fight coach, manager and mentor from basically the moment I walked into the gym.”

“We had a great relationship in the beginning to build off of, as he and I both wrestled in our youth and high school days,” he said. “He has been one of the main driving forces behind my fight career.”

In 2018, Merrill picked up what he calls the “biggest win of my life” when he proposed to Mott following a victory over Kevin Gray via first round submission. The couple are engaged to be married.

“We want to have a family and fight,” Mott said. “We are chasing our dreams.”

An event Merrill was set to compete at has been postponed until later this year due to COVID-19.

“None of this would be possible without my mom, Christy, and my dad, Steve,” Merrill said. “Also my sponsors both past and present including McChesney Auto, Weston Tree Service, Hilsabeck Window Cleaning, Top Mount Apparel, Erica Trudeau-Adams and, posthumously, to Jeremy Caldeira with Wild At Heart Tattoo. He created my ‘The Surgeron Merrill’ logo and gave me my first and only tattoo.”