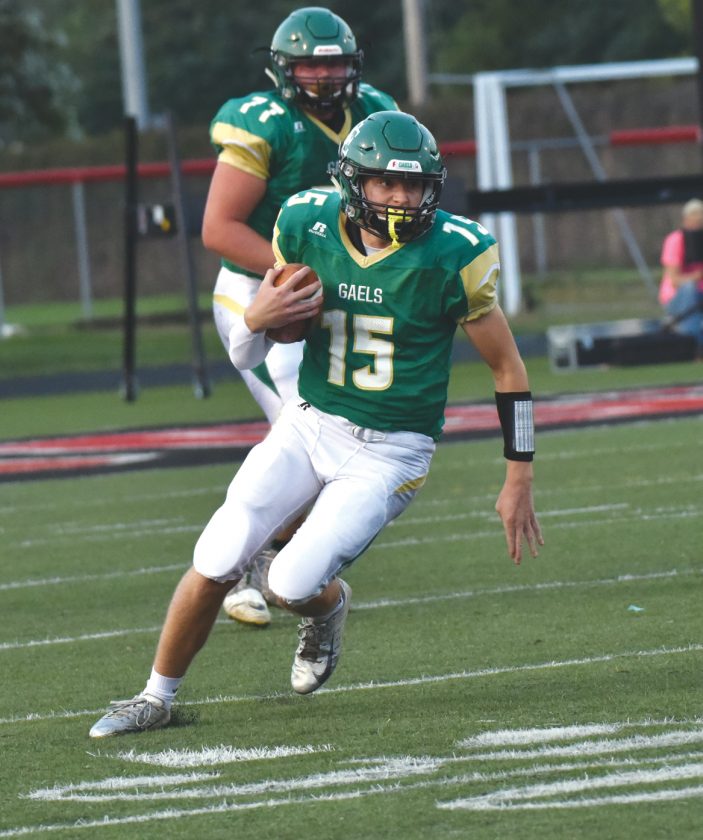 —Photo by Tom Vogt St. Edmond quarterback Drew Schaeffer will return for the Gaels after throwing for 734 yards a year ago. The Gaels will face long-time rivals Ealge Grove, Clarion-Goldfield/Dows, Manson Northwest Webster and Bishop Garrigan.

The 2020 football schedule for St. Edmond definitely has a tradition-rich flavor to it.

Released by the Iowa High School Athletic Association on Thursday, the Gaels will take on long-time rivals Eagle Grove, Clarion-Goldfield/Dows, Manson Northwest Webster and Bishop Garrigan among their nine games.

St. Edmond went 2-7 a year ago, scoring victories over both North Union and Eagle Grove, under head coach Matt Dillon.

Up first will be a date on the road Aug. 28 at Eagle Grove followed by back-to-back home games with Clarion-Goldfield/Dows and Ogden. The Gaels head to Madrid on Sept. 18 before returning home to face North Union a week later.

St. Edmond closes at West Hancock, home inside Dodger Stadium vs. Manson Northwest Webster, at Alta/Aurelia and back home to face Bishop Garrigan on Oct. 23.

Week 5 begins Class A, District 2 play for the Gaels, who were winless in the league a season ago. Last year, St. Edmond faced four of its five district opponents with games against North Union, Bishop Garrigan, Alta/Aurelia and Manson Northwest Webster.

Quarterback Drew Schaeffer returns after throwing for 734 yards and seven touchdowns as a junior. Schaeffer will have his leading targets in classmates Kase Baker and Parker Oswald to work with once again after Baker caught 22 passes for 290 yards and Oswald had 23 receptions for 278.

Junior Sean Flattery is also returning to the backfield after rushing for 486 yards with six touchdowns, as Baker added 476 yards and five scores.

Flattery, sophomore Tyler Rossmanith, Oswald, junior Brock Stanek, Baker, freshman John Nemmers and Schaeffer all are back along the defensive side of the ball. Flattery led the team with 76.5 tackles and three sacks, and Baker had four interceptions.