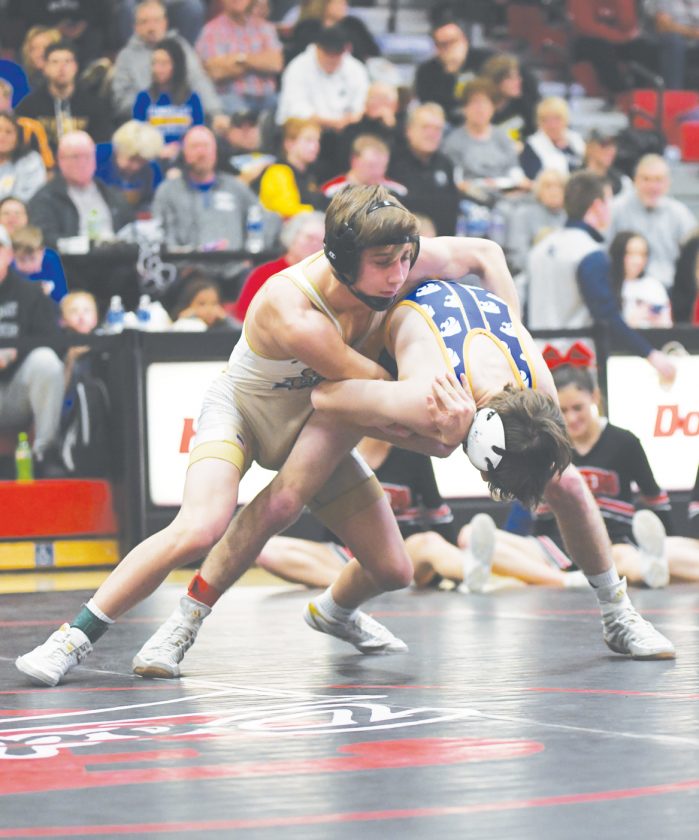 Twenty-four area athletes medaled this winter, with five wrestlers reaching the state finals. Four of which will return next season.

After his third straight finals appearance and second consecutive title, Ayala is The Messenger wrestler of the year.

Ayala, who recently announced he will compete with Iowa upon graduation from Fort Dodge Senior High, went 48-0 and extended his win streak to 91-straight matches.

Ayala is the top-ranked 120 pounder in the nation and ran through the state weight class with three falls and a technical fall.

He helped lead the Dodgers to two more state medals, finishing third at state duals and third at the traditional state meet.

The future Hawkeye was also named the 2020 Dan Gable Mr. Wrestler of the Year in Class 3A.

Fort Dodge senior Carson Taylor was named the all-Messenger wrestler of the year runner up. The Dodger senior finished his career as the 126-pound state runner up, a year after winning the 120 pound title.

Taylor finished 36-4 on the season, losing to Iowa recruit and nationally ranked Cullan Schriever in the championship match.

In the first ever all-Messenger wrestling team we highlight the top-14 wrestlers at each weight class, with runner ups as well. All eight Fort Dodge medalists made the team.

Phetxoumphone went on a tear through the 106 pound Class 2A bracket, to claim the crown.

In the championship match, he handed freshman McKinley Robbins of Greene County his second loss of the season, 5-0.

During the tournament, Phetxoumphone had a fall, a major decision and two decisions.

Phetxoumphone had a strong head-to-head connection with fellow North Central Conference foe Cole Nelson. Phetxoumphone beat Nelson in the quarterfinals (4-0). This year Phetxoumphone went 6-0 against Nelson. The Wildcat senior had seven losses, six were to Phetxoumphone.

For the second straight season, Cowell reached the podium for the Dodgers. As a sophomore, he finished fourth.

This year he finished the season in seventh place. He was 33-11 on the season and won three matches at state. He lost a tight sudden-victory quarterfinal match to the eventual fourth-place finisher.

Ayala, who is ranked No. 1 in the nation spent little time on the mat on his way to his second straight title. The future Hawkeye ended three of his four matches in the first period and picked up a second period tech fall in the other.

Ayala is currently seventh on Fort Dodge’s all-time win list with a career record of 135-2.

After winning the state championship as a junior, Taylor was bound and determined to return to the finals.

In the finals, he was pitted against nationally ranked and future Hawkeye Cullan Schriever. Taylor, who will attend Grand View next year, lost a 9-4 decision. It was his second loss to Schriever in a two week period.

Taylor finished his career tied for 13th on the Dodger all-time win charts, with a record of 121-19.

The senior finished his career with three state appearances. He qualified as a freshman and was fifth a year ago.

The 132-pounder finished his career with 100 victories, 30 of them coming in his final season as he finished eighth.

After qualifying for state as a sophomore, Phillips was ready to break through in his junior campaign. The Dodger 138-pounder did exactly that, reaching the state finals.

Phillips ran into a buzzsaw in Iowa recruit Caleb Rathjen. Phillips couldn’t get past the future Hawkeye, but had a banner 2020 campaign.

Phillips, who was ranked second most of the season, went 39-8 for Fort Dodge.

The future Morningside wrestler made the most of his senior season. Mills, who finished his year at 31-14 reached the state tournament for the first time and finished sixth.

To reach state and earn a spot on the podium, he defeated Iowa recruit Colby Schriever twice.

Only twice in 48 matches — against Wisconsin recruit Joseph Zargo of Bergen (NJ) and Scott Robertson of Millard South (Neb.), who ended up at 152 — did Mills allow bonus points in losses.

Cook placed sixth at state, but had arguably one of the toughest brackets in the tournament.

Cook finished the season with 26 victories.

McAlister, a sophomore, for South Central Calhoun reached the state semifinals, but was upended by Iowa Valley’s Benjamin Smith, 7-3. McAlister finished 46-5 on the year and 83-16 in two years after his sixth place finish.

The Emmetsburg senior finished his E-Hawk career with his fourth state trip and his second straight medal.

Griffin, who qualified as a freshman and sophomore, placed sixth as a junior and capped off his career with a 23-6 campaign and an eighth place medal.

The Dodger senior didn’t exactly finish his career the way he wanted to, but he did finish where he wanted to be.

For the second time, the 182-pounder reached the state tournament. Lee qualified as a sophomore, but missed out last season.

He accumulated 26 wins and was part of the Dodgers third place state duals team and the bronze medal traditional state team.

Runner up: Matthew Wirtz, so., Emmetsburg

After a knee injury kept Egli out for his entire junior campaign, Egli came back with a vengeance in his final season.

Egli, who put together a 24-4 year, finished third. He had a tough semifinal loss to third-ranked Ashton Stoner-DeGroot of Cedar Rapids Prairie, Egli bounced back with wins over the eighth and sixth ranked wrestlers.

Hamilton put together a solid senior campaign, going 40-4 and suffering three of his losses at the state tournament.

Hamilton, who finished third, lost all of his matches by a total of six points.

In his first state tournament, Johnson finished fifth and earned 43 victories on the season.

Overall, Johnson was on the mat six times, winning four bouts — including three by fall. He scored all 15 of Pocahontas Area’s team points.

Johnson knocked off four wrestlers who won a combined 193 matches this past winter. His two losses came to the third and fourth place finishers in his weight class.