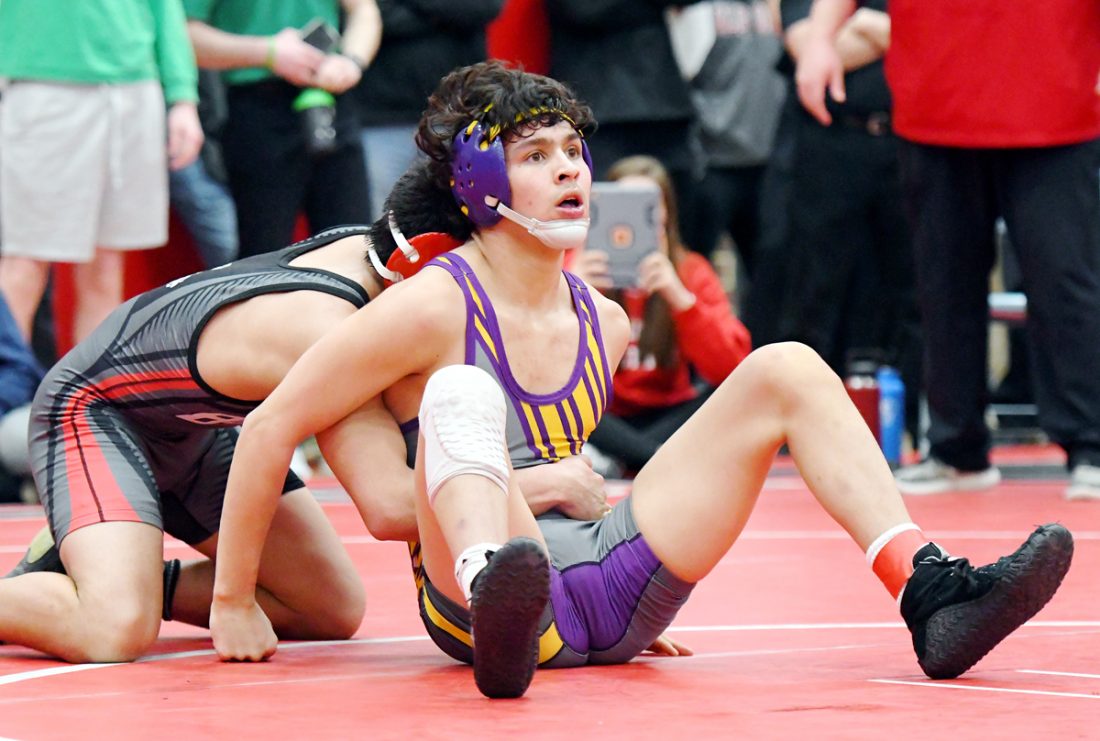 Cole Nelson, Jase Goodell and Colton Goodell all finished second for the Wildcats, moving on without having to compete in wrestlebacks.

Nelson was the runner-up at 106 pounds to Webster City’s Camron Phextoumphone, who is ranked first in Class 2A, 5-0. Nelson, third in the weight division, enters state 31-6.

Jase Goodell earned a 4-2 decision over Clear Lake’s Max Currier at 113 before falling to No. 9 Kellen Moore from Forest City in the finals. His win over Currier pushed him through.

The same path was taken for Colton Goodell, as he downed Barrett Muller of Osage via major decision before falling to Algona’s Andrew Hamilton in the finals, 6-4, at 220. He is now 32-7 on the year overall.

Humboldt will also be competing Wednesday in the 2A state duals tournament, as the Wildcats open up with No. 1 West Delaware at 9 a.m.

Algona will be represented with three qualifiers in Cole Lewis, Hamilton and Gavin Meints. Lewis and Hamilton each won titles, with Meints advancing as a runner-up.

“It’s an amazing feeling,” Lewis said. “I can’t really describe it. It’s great to know all the hard work I’ve put in over the years is finally paying off.”

This past fall, Lewis helped the Bulldogs reach the state semifinals and play inside the UNI-Dome. This, though, was something else special.

“Playing on the big stage in football has definitely helped me stay calm in an atmosphere like (districts),” he said. “But no football game was quite like that gym this weekend.

“The individual aspect also adds a lot more pressure to the situation.”

Hamilton, ranked fourth at 220 pounds, claimed a major decision in the semis before topping Humboldt’s Colton Goodell in the finals, 6-4. The senior is 37-1 on the year.

Meints downed Emmetsburg’s Jordan Anderson with a fall in the semis for his 31st win, but was topped by Forest City’s ninth-ranked Austin Kelso, 4-0. He advanced thanks to the win over Anderson.

“It feels great,” Meints said. “All the work for the past four years has finally paid off and it just feels great.

“I’ve been wrestling since my middle school days and it by far has been the best wrestling memory I have had. I’ve always dreamt of making it to the state tournament.”

Jake Zabka and Luke McKenna finished third each for the Bulldogs. Zabka closes out his year 29-10, while McKenna went 24-16.

Webster City’s Phetxoumphone and Nick Gasca will be on the state mats. Phetxoumphone, who was fifth last year, carries a No. 1 ranking and unbeaten record of 38-0 into action.

The 106-pounder scored a fall over Zach Feld of Garner-Hayfield/Ventura in the semis in 93 seconds before earning another win over rival Nelson in the finals.

Gasca claimed a true-second fall vs. Brad Wirtz from Emmetsburg to secure his spot at 145 pounds. After falling in the semis to Hampton-Dumont’s David Cornejo, he battled back with an 8-2 decision vs. Luke Brown from Garner-Hayfield/Ventura and is now 25-10.

Chase Rattenborg was third for the Lynx with Evan Estlund and CJ Hisler placing fourth. Rattenborg dropped his wrestleback and ends the year 30-11 with Estlund 22-19 and Hisler 27-14.

Emmetsburg’s Bret Hoyman was a district champion as Mason Griffin and Matthew Wirtz advanced as runners-up to state.

Hoyman won the 152-pound bracket with a pair of decisions, including a 4-0 victory over Forest City’s Kristian Gunderson in the finals to improve to 37-6.

Griffin pinned Adam Heflin from Garner-Hayfield/Ventura in the semis with a second left in the second round, but was topped by Osage’s second-ranked Spencer Mooberry for the 170-pound title. At 21-3 and No. 7 in the state, he advanced thanks to the win over Heflin.

Wirtz (32-12) claimed a wrestleback victory at to finish second at 182. He pinned Osage’s Keaton Muller before falling to Forest City’s fourth-rated Reese Moore in the finals, 10-5.

Southeast Valley’s Caelan Oakes and Mark Hughes each had their season come to an end.

Robbins claimed the 106-pound title with Gallagher finishing second at 113.

Will Hansen was third and Sawyer Schiltz fourth.

Robbins, 34-1 on the year with his lone loss coming to Webster City’s Camron Phextoumphone, scored a 52-second fall before besting Easton O’Brien of Atlantic in the finals, 10-4. The freshman is currently ranked second behind Phextoumphone.

Gallagher topped Chase Sandholm from Red Oak, 7-0, but was bested by Atlantic’s Aybren Moore in the finals. He advanced thanks to the win over Sandholm and enters state 33-13.