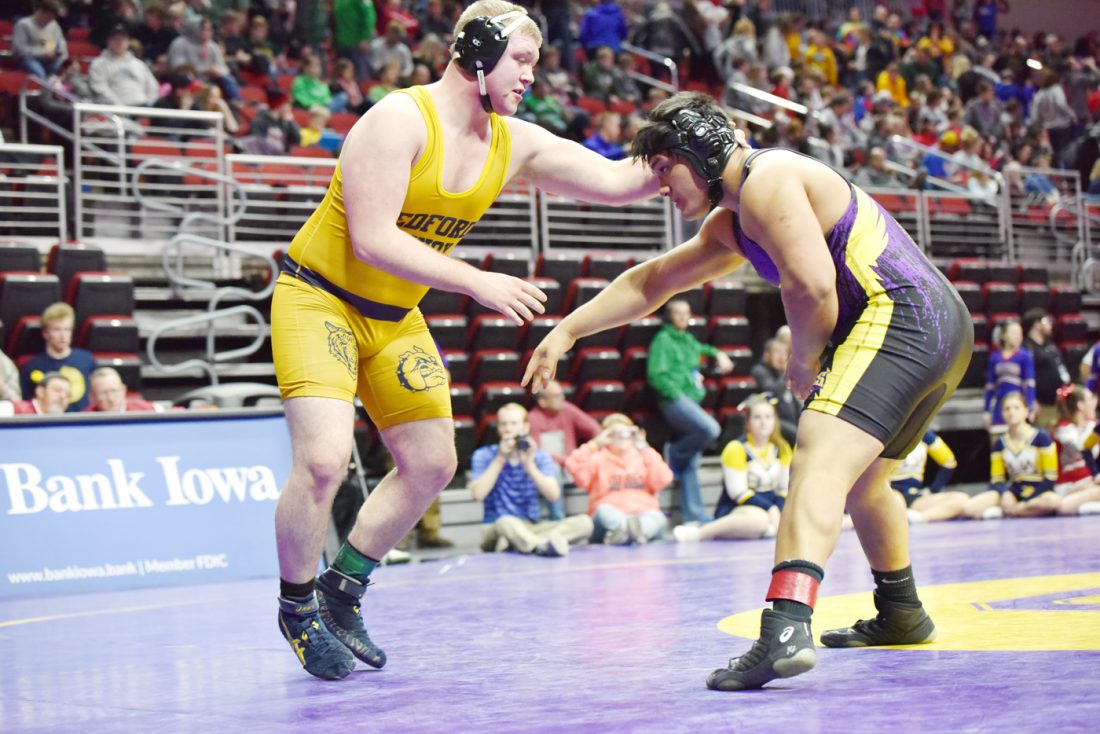 McAlister will be making his second trip in as many seasons to state after qualifying as a freshman. The No. 6 160-pounder scored a pair of falls to improve to 44-3 on the year and 81-14 overall.

In the semifinals, McAlister put Devin Monahan of West Monona on his back in 1:29, following that performance up with a third period fall vs. Teegan Tschampel of Hinton in 4:56.

Khommanyvong, a junior, earned his first trip to state at 138 by downing Kaden Broer of West Monona, 8-2, and Hunter Hanner from Westwood, 11-2.

After reaching districts last year with 30 wins, Khommanyvong will head to state 34-3 this season and with 104 career victories.

“This really was a good day considering winning and making it to state not only for myself but for Kevin, Blake and Brian also. I’m really pumped about all four of us making it. We all just feed each other’s fire.”

Brian King punched his first state trip after also reaching this round last year. The senior bested Megaeska Kalskett from West Monona in the semis, 10-5, and pinned Logan Smith from Akron-Westfield for the title.

Eagle Grove’s Mark Dawson and Joel Mendoza will have the opportunity to add to their 90 wins this season as Class 1A state qualifiers out of Sioux Rapids.

Thanks to a 6-5 decision over Reed Abbas from Clarion-Goldfield/Dows, Dawson, ranked seventh, will head to state 51-4 on the year. He picked up a technical fall in the semifinals.

Seaba (38-10) claimed two falls on the day, pinning Cormick Currans of Graettinger-Terril/R-A in 2:44 and Seth Salker from West Sioux in 5:24.

Stein claimed a wrestleback via fall over in 1:20 to earn his spot to go along with a tech fall. Abbas moved on thanks to his semifinal victory over Dillon Lynott of West Sioux, as he advanced with a record of 39-9.

Remington Hanson and Kain Nelson were third for the Cowboys, with Cale Kirstein, Cael Ahrens and Camden Hanson finishing fourth each.

Dane Johnson kept his year going by winning the heavyweight division with a pair of falls for Pocahontas Area. Johnson stuck Jose Rodriguez of West Sioux in the finals in 3:50 to improve to 39-5.

John Schuttler will head to state at 195 for Manson Northwest Webster after placing second. Schuttler, 41-6 on the year, earned a major in the semis vs. Kyler Bak of West Sioux before falling to Hull Western Christian’s Eli Van Ginkel, 6-5.

Carson Collins, Daniel Thoma, Christopher Krueger and Brodie Anderson were all third for the Cougars, with Ian Kohnen and Grant Calmer finishing fourth.

Logan Studer finished fourth at heavyweight for the Wolverines, going 29-14.

North Union’s Trevor Kruse and Jake Anderson came up short, as both finished third. Kruse ended the year 29-6 and Anderson 6-13.