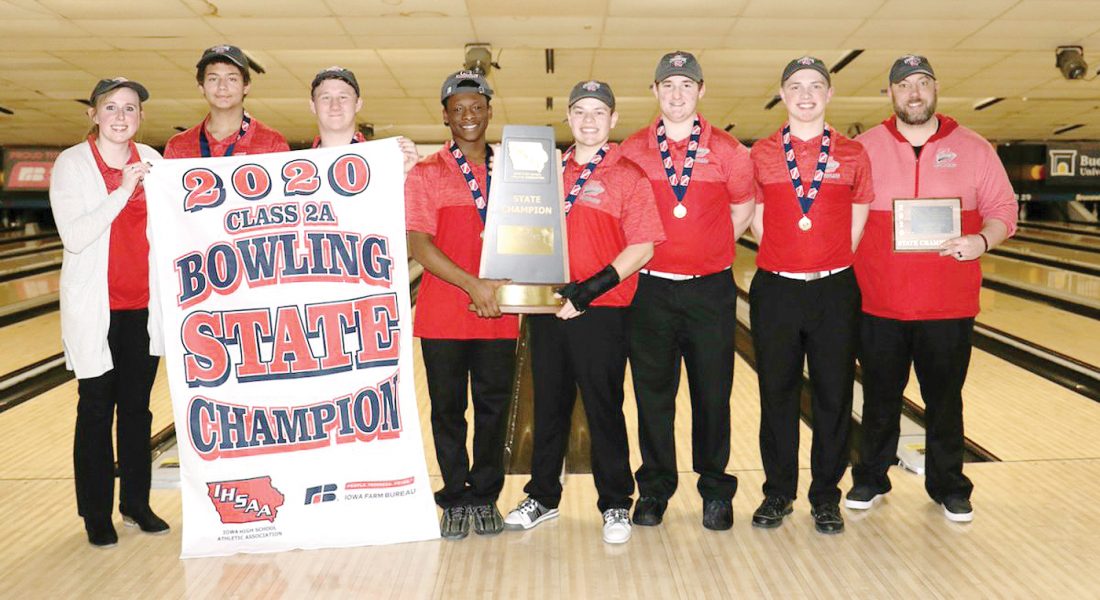 WATERLOO — The Fort Dodge boys bowling team’s potential was a topic of conversation all year long, even as the Dodgers struggled through the dual portion of the season and went winless in the CIML Iowa Conference.

All of the questions were answered emphatically on Tuesday, as the Dodgers won the Class 2A state championship at Cadillac Lanes.

Anchored by a gold-medal performance by junior Kaleb Anderson, head coach Nick Vinson’s squad prevailed by just four pins over runner-up Urbandale. Anderson’s title was even closer, as he finished a single pin ahead of Cedar Rapids Xavier senior Dale Weaver for the crown.

“I am so proud of everyone on my team,” said Anderson, a three-time individual state qualifier who fired a 267-279–546. “Every single one of those guys tried their absolute best to give us the best opportunity to win. Myself and some of my teammates have been bowling together for over six years, and we used to talk about how we would win the state title (together someday).

“It’s just great to see everyone on the team step up and do this well after all of the close losses. It was always a tough ride home after those meets. We finally were able to figure out what we had to do to be a team.”

The boys were able to duplicate the 2015 squad’s run to state’s summit, while matching last year’s FDSH girls state title. Combined with elite wrestler Drake Ayala’s crown last Saturday night, the Fort Dodge athletic department has now accumulated 30 individual or team championships in the last six athletic seasons: 14 in wrestling, six in bowling, five in cheerleading, four in tennis and one in track.

“I can’t say enough about what our guys have done in these past few weeks,” Dodger head coach Nick Vinson said. “To be close so many times but come up short over and over again could’ve taken the fight and will out of them, but they never gave up on each other.

“To see them sweep the (CIML Iowa) conference tournament, the state-qualifying meet and now this is truly incredible. It’s been such a fun stretch. Anytime you get a group that comes together and truly becomes a team when it matters most…it’s just something you’ll always remember.”

The Dodgers were even with Ottumwa heading into the Baker round, which was a sore spot during the regular season. Fort Dodge had a steadier hand than the competition, though, with games of 213, 210, 212 and 211.

The J-Hawks nearly rallied in the final game, out-scoring the Dodgers by 20 pins to close the gap. Fort Dodge’s 3303 clipped Urbandale’s 3299, with Ottumwa (3289) taking third.

“It got to be nerve-wracking, but everyone stepped up at different times and contributed,” Vinson said. “And that’s what you need to win a title. Kaleb was outstanding. He only got third at conference and third at districts, but he was right there to support his teammates and didn’t get down or jealous when others had success. (On Tuesday) it was his turn. He really wanted to be down here with them (instead of as an individual qualifier like in the past), and I really think that elevated his game.”

“It just wasn’t their day,” Vinson said. “That happens sometimes. It doesn’t change how proud we are of this group for making it back. I think their naivete worked in their favor a little (a year ago), and they felt the pressure of (defending their title) this time around — maybe more so than they or I wanted to admit. There is something to be said for coming from the perspective of the boys, compared to having to deal with having a target on your back like the girls did.”