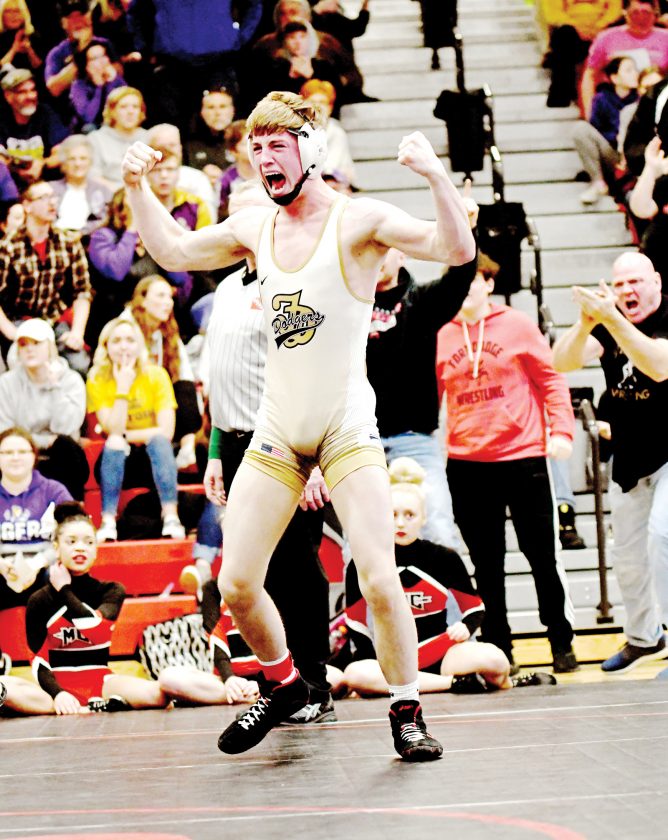 The Dodger senior wrestled 26 matches a year ago, compiling a .500 record while battling through some injuries.

“I just knew my time would come,” Mills said. “I put in a lot of work in the offseason and I just kept after it.”

In his final season at FDSH, Mills started to make a name for himself at 145 pounds. And after Saturday’s district tournament, Mills won’t be over looked anymore.

Entering the tournament, Mills was ranked eighth. In the district finals, he knew he would be tested against Mason City’s second-ranked Colby Schriever — a University of Iowa recruit.

The two fought to a scoreless first period. Mills got on the board first with a takedown and followed that up with another to take a 4-1 lead into the third period.

With the score 4-2 and 1:45 left regulation, the wrestlers got into a scramble situation near the edge of the mat.

“It was kind of a feeling-out stretch in their first period. I think both of us didn’t want to make a mistake,” Mills said. “I just wanted to go out there and wrestle my match, but not get too aggressive.”

Mills (29-11) turned Schriever’s takedown attempt into near-fall points and eventually picked up a pin in 5:58. Mills let a well of emotions erupt, pointing to the Dodger faithful as he punched his state ticket for the first time.

“It was a great feeling to advance to state and be able to let those emotions go,” Mills said. “There is no better place or crowd. I was happy to be able to do it in here.”

Now the Dodger senior will await his first-round assignment in Des Moines. Fort Dodge head coach Bobby Thompson is excited to see what Mills can do.

“Brandon has been wrestling well all season,” Thompson said. “He has a high skill-set, and we knew he was going to be in that match regardless of rankings.

“Brandon has a great shot of getting on the podium, and this win will definitely help him in the seeding process.”