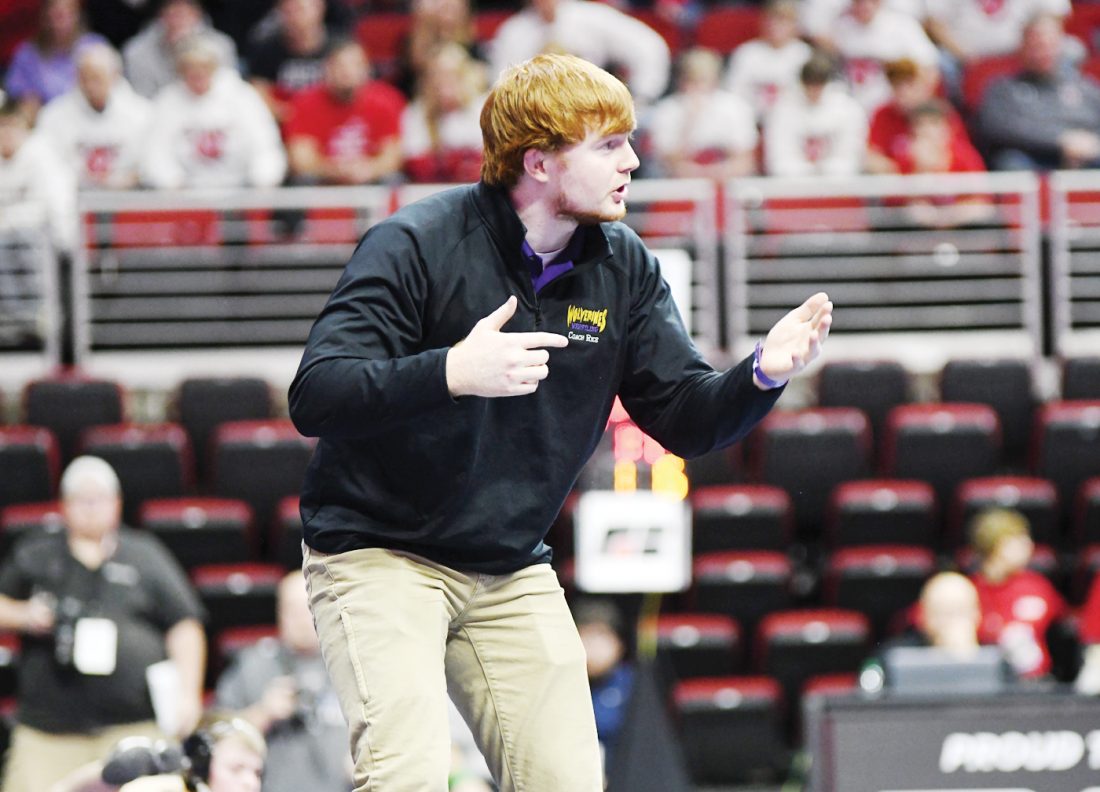 DES MOINES — Wrestling is in the Rice bloodline, and Payton Rice is the latest to join the fraternity.

Rice, a 2014 Manson Northwest Webster graduate and four-time state qualifier for the Cougars, is now a coach like his father, Stacey. Payton is in his third year at the helm for West Bend-Mallard.

“My dad and I are very similar when it comes to coaching,” Payton said. “We are what I would describe as ‘players’ coaches — we get them prepared mentally, but keep things light.

“We make practices and the season fun and enjoyable.”

The father-and-son duo knows plenty about the sport, with seven medals between the two. Stacey was a three-time state champion for Storm Lake (1986, 1988 and 1989), while also taking fifth in 1987.

Payton wrestled under his father’s direction at MNW. Payton was sixth as a freshman in 2011, followed by a runner-up showing as a sophomore and fifth-place medal as a junior. He earned bronze medal as a senior at MNW.

Three years into his stint as Wolverine head coach, Payton brought two wrestlers to this year’s state tournament — only the second and third ever at school. Both finished on the medal stand to make history at WB-M.

“I’m extremely proud of the way they wrestled this weekend,” Payton said. “We believed they would bring home medals, even if everyone else didn’t. They both got bad draws from the start and had a tough road to place if they couldn’t pull of an upset early.”

Fourth-ranked junior Donavon Hanson (106) was making his second state appearance. He qualified as a freshman while attending MNW. Connor Fehr (170) was a senior in his state debut.

Both wrestlers lost their first-round matches, but bounced back with two and three straight victories, respectively, to become West Bend-Mallard’s first two medalists.

“Donavon had to upset the No. 1 seed Quincy Happel (Lisbon) and he wrestled an awesome match (6-2) to claim West Bend’s first state medal,” Rice said. “Connor had to knock off No. 6 Max Kohl (Lisbon) to claim his medal.

“Donavon and Connor have progressed a lot throughout the season. Donavon isn’t satisfied with placing eighth and will come back hungrier then ever. We talked before the state meet about how close matches are won by those who stay disciplined. He has one more season to climb the podium. Connor finished his career as West Bend’s career win holder at 103. He was the first to hit 100.”

Rice is still learning the ins and outs of coaching. Fortunately, his dad is never far away.

“I use my dad as a sounding board daily,” Payton said. “Everyday after practice we talk on the phone on my way home from West Bend to Manson.

“I also couldn’t ask for a better assistant coach in Andy Dahle from Lake Mills, and a better community to be a part of in West Bend.”

After being on both sides of the mat, Rice has a feel for the comforts and struggles of being both a wrestler and a coach.

“On the coaching side I might be a little biased, but I think we have the best young staff in the state,” Payton said. “Coach Dahle and I both agree it is more nerve-racking coaching than wrestling. No matter what you see or notice, you can’t physically help in any way.

“We are a young team hungry for more success at the state meet.”

Stacey, who coached for 11 years at Manson Northwest Webster and was an assistant coach at Colfax-Mingo, is enjoying watching his son on the mat.

The Rice duo only spent one year coaching together on the AAU Iowa Disney Team in Orlando, Fla.

“It’s hard to put into words what it means to coach with him or watch him coach,” Stacey said. “He is amazing with the wrestlers. He is very detail-oriented, and understands that each wrestler learns differently. He’s also a great game-planner leading up to big matches.

“I’m very impressed and proud of the development his team has shown this season. I’m just a proud dad that is enjoying the journey of coaching Payton and now watching him pass on his knowledge.”