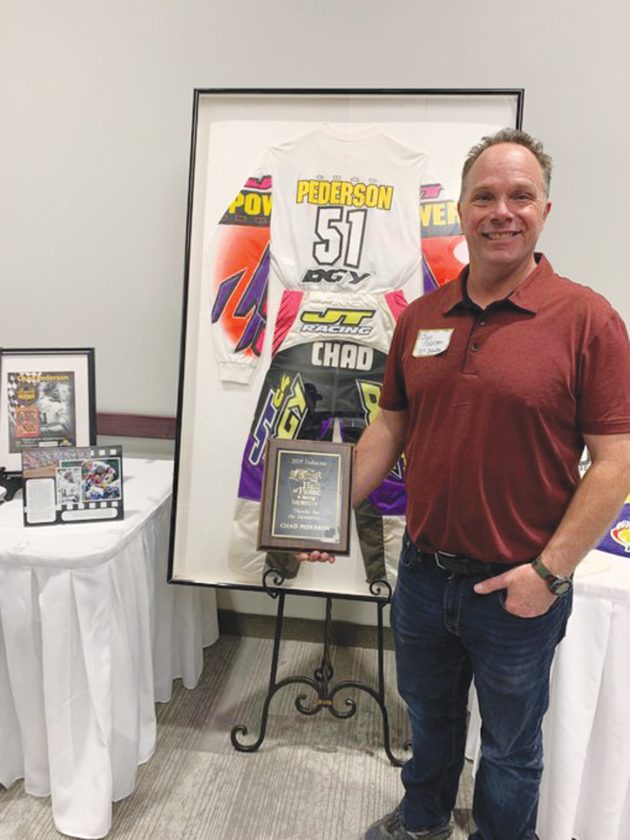 —Photo by Cali Paige Pederson Fort Dodge native Chad Pederson stands with his plaque and racing gear after being inducted into the Iowa Hall of Fame and Racing Museum. Pederson had a successful racing career, winning numerous times at Loretta Lynn’s. He had a 10-plus year on the pro circuit and traveled around the world.

When young motocross riders around Fort Dodge talk about their love for racing and where it came from, one idol always surfaces: Chad Pederson.

The Fort Dodge native made a name for himself all across the world in the 1980s and 90s, and his name has been synonymous with success on the dirt track.

This past winter, Pederson — a Fort Dodge native — was inducted into the Iowa Hall of Fame and Racing Museum’s 2019 class.

“It was very unexpected,” Pederson said. “It was cool to think they’d do anything like that for me.”

Pederson gained invaluable experience and a lifetime of memories during his world travels.

“I was eighth in the Canadian Nationals in 2002,” Pederson said. “I’ve been in Mexico, Costa Rica, Japan, Australia, Paris, and Barcelona.

Even though Pederson isn’t riding competitively anymore, he still keeps an eye on the youngsters around the area while helping them hone their craft.

“There are a few young riders coming up right now, which always seems to be the case (in the Fort Dodge area),” Pederson said. “Izaih Clark, Ronnie Orres and his brothers, and quite a few other riders that are really fast. I watch guys like Justin Brayton (Fort Dodge native), who is an unbelievable guy. It’s cool to see how far he has taken it.

“Teddy Maier, who is from Fort Dodge, won the Canadian National championship. Those guys are up there and are pretty competitive. Gavin Faith (retired rider from Fort Dodge) had a lot of success in arenacross as well.”

Pederson may be keeping an eye on the youth, but young riders were the ones watching him pave the way when they got started in Fort Dodge.

“It’s unbelievable that they watched me and want to race like me,” Pederson said. “It kind of showed me that even from a small town, you can do what you want to do. It’s cool to know they think I paved the road. But now a lot of them are definitely outshining me.”

Pederson still finds the time to help out on the track.

“I do as much as I can to help,” Pederson said. “I’ve been teaching kids for probably 25 years. I had my own facility and worked with kids. The kids I’ve worked with are doing very well riding.”

Pederson is now back in Fort Dodge and working for MechaniCo LLC. He lives with his wife, Michelle, and his three daughters: Dallas, Cali and Jacie.

Even though Pederson was a success on the track, he knows he couldn’t have done it alone.

“I appreciate everyone that was behind me every step of the way,” Pederson said. “I couldn’t have done this without my family and friends.

“My mom (Sharlene) was very instrumental in all of it. She was always there for me unconditionally.”