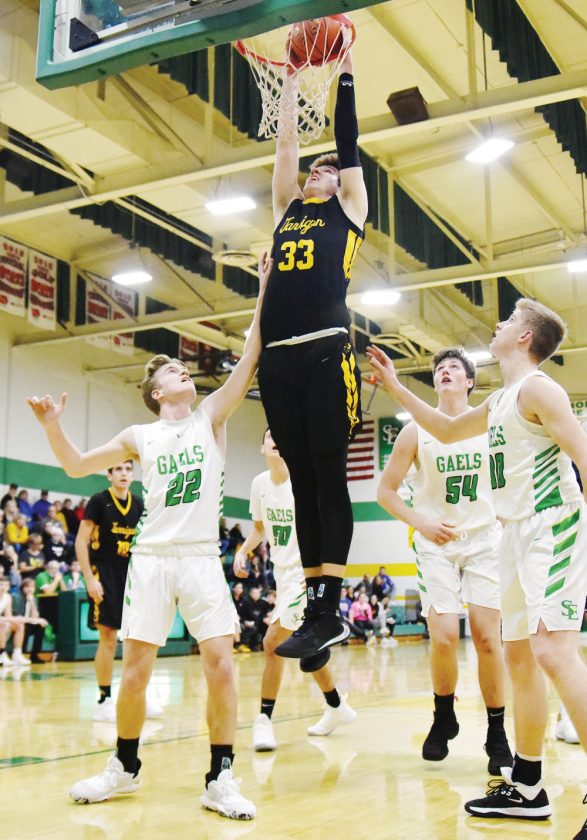 The fourth-ranked (Class 1A) Golden Bears put the finishing touches on claiming the Top of the Iowa West division title here Monday night with a 102-64 victory over North Iowa.

“This year, we really get after it defensively, and when we do, we get out and score,” BGHS head coach Mark Meister said. “These seniors have put in tons of work to be in this position. We are really looking forward to a tournament run, but we still have a lot of work to make sure we can get to our full potential.”

Bishop Garrigan (18-2 overall, 14-1 in league) finished a game ahead of No. 8 (1A) Lake Mills, as the two split the season series. The only other loss this season came in December to Algona by two.

Cade Winkel, who has signed to play at Briar Cliff University next year, is one of five seniors on the roster. For him, this has been a goal they have been working on for a long time.

“For me and my classmates, this means a lot,” he said. “Coming up in middle school, our class was always one of the best in the area and no one really beat us, so for that to be true four years later is very gratifying.

“Our senior class wants to be remembered as the greatest basketball class in Garrigan history, and this was one of the steps in becoming that.”

Brothers Cade and Angelo Winkel — a junior — both went over the 1,000 career-point mark in the same game earlier this season. Andrew Arndorfer, Joyce, Baade and Plathe are also seniors.

The Golden Bears reached the state tournament a year ago after finishing second in the conference.

Bishop Garrigan closes out its regular season Friday at home vs. Hampton-Dumont.