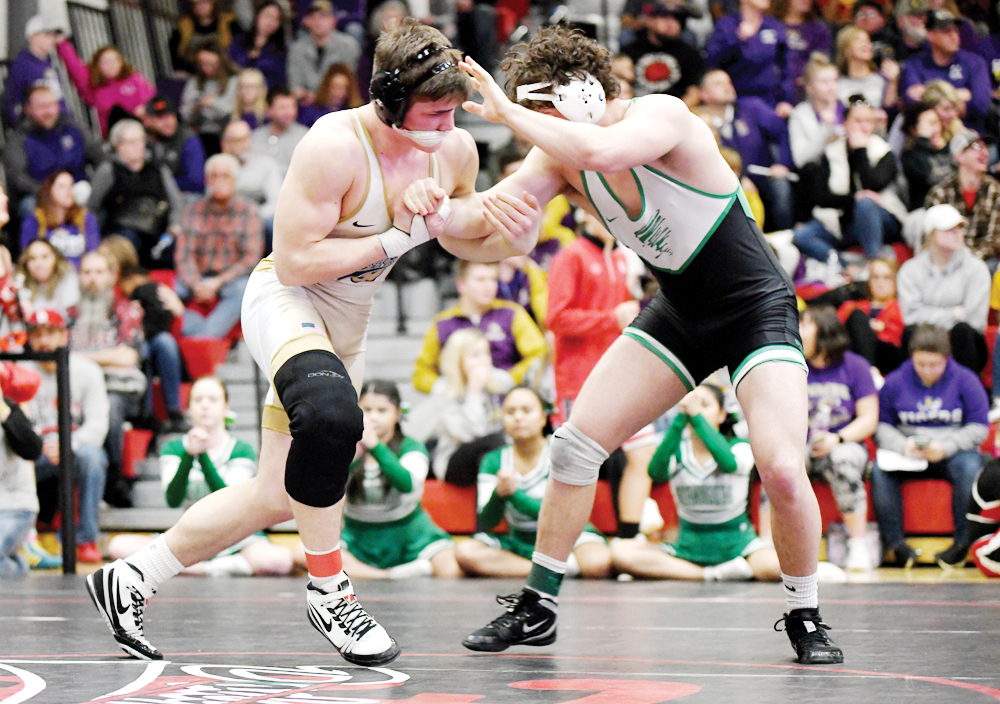 Everyone on the Fort Dodge wrestling team has a different story on a different path to success.

The Dodgers finished with 278 team points, distancing themselves from runner up Spencer (184) and LeMars (177).

Thompson has watched his group take on some of the best the midwest has to offer and more, not worrying as much about individual accomplishments and putting the program ahead of personal success.

“We live by God first, family second, and wrestling third,” Thompson said. “This whole team cares about each other. Everyone is watching matches when they’re not competing and looking out for each other.

“They bleed together, sweat together and work for each other. It hurts deep when one of their brothers doesn’t make it.”

Ayala, a junior who has competed in two straight state finals and is a defending champion, made quick work of his opponents on Saturday, earning two technical falls. He won his semifinal in 2:24 and his 120-pound title in two minutes. He outscored his opponents, 47-17.

“It’s awesome; a great opportunity for us all,” said Ayala, the nation’s second-ranked 120-pounder. “We only get this experience a few times, so we’re excited.”

Brooks Cowell (28-7), who placed fifth a season ago, needed a quick flurry at the end of the third period to win his 132-pound crown against Nick Walters of Sioux City North. Walters (38-4) recorded a takedown with 10 seconds left to go up 4-3. Cowell broke the hold for an escape and took Walters down as time expired.

The referees conversed and awarded Cowell the victory.

“It feels good to make it win and make it back to state, but I feel like I didn’t wrestle at my highest ability,” Cowell said. “I’m going to work on what I need to before state comes.

“I’m excited to be back at state, and can’t wait to wrestle with my teammates.”

“I was a little nervous going into the finals, but I knew I would go out there and get the job done,” Cook said. “It means everything to go back to state, and hopefully, I’ll get on the podium this time.”

Phillips (36-7), who has quickly made a name for himself at 138 pounds, had little trouble making it through his bracket. He had a first-period fall in the semifinals and a 19 second pin against Cole Wilcox of Sioux City East in the championship.

“Dreyzon’s confidence is growing,” Thompson said. “He was not happy with his state performance (last year). With this victory, he put himself in position for a good seed.

“Kody had a great tourney and has really come on lately. His record does not indicate how he has been wrestling.”

Egli (20-3), missed the entire wrestling season in 2018 with a knee injury and part of this season with a broken hand, but he’s come back with a vengeance this week.

Egli recorded a fall in 2:54 of the semifinals, and a major decision over Storm Lake’s ninth-ranked Colton Dreith, 10-1, in the championship.

“Levi is in a good position to get a top-two seed,” Thompson said. “Since he’s been back, he hasn’t missed a beat.”

Freshman Max Bishop (29-11) and senior Brandon Mills (29-11) both punched their first state tickets. Bishop recorded a fall in 2:59 of the semifinals, then pinned Spencer’s Case Cauthron in 1:26 of the finals.

Mills had a technical fall in the semis, and pinned second-ranked University of Iowa recruit Colby Schriever of Mason City at 5:58 of the third period for the title.

In the highlight match of the meet, top-ranked Iowa Hawkeye recruit Cullan Schriever tangled with Taylor (33-3), a Grand View University recruit. Schriever, who was wrestling for the first time since recovering from a dislocated shoulder, picked up an 11-5 win over Taylor.

Taylor, who has 115 career victories, secured his state berth with a fall over Sioux City East’s Johnny Gomez in the wrestleback round.

“It was disappointing to lose,” Taylor said. “I felt pretty good and ready to go, but fell short. I’m going to work on some things I struggled with during the match.

“We did well as a team. I’m happy for everyone.”

After qualifying as a sophomore and coming up short last season, Lee (26-16) advanced as a runner-up. Last season, Lee was in a bracket with the fourth- and third-ranked wrestler, coming up just short in the wrestleback round.

On Saturday, Lee lost the 182-pound final to Colton Hoag of LeMars in 3:33, then advanced by rule. Lee had identical-timed pinfalls in the quarterfinals and semifinals, winning both in 18 seconds.

“It’s been on my mind all year long (losing last year),” Lee said. “I was constantly thinking about it. It’s a good feeling to be returning to state.

“It breaks my heart to not see all of my teammates make it, though.”

Lane Cowell (30-9) and Pederson (11-5) advanced after losing in the finals. Cowell suffered a 3-2 loss to Mason City’s fifth-ranked Jace Rhodes. Cowell had a fall in 1:23 of his semifinal match.

Pederson lost by fall to Kole Wiegert of Storm Lake in the championship round. He had a fall in 1:41 of the quarters, and a 47-second pin in the semifinals. Both advanced by rule.

“Tucker is basically wrestling three weights up, so it’s pretty impressive to see him competing at state,” Thompson said. “Lane closed the gap (with Rhodes). He’ll be there when it counts.

“Max has been wrestling well, and it will be good for him to compete in Des Moines as a freshman.”

Seniors Savion Wheat (160) and Colten Munter (285) had wrestleback matches, but came up short. Wheat lost in the semifinals, but bounced back with a fall in 37 seconds over Storm Lake’s Tegan Mattson.

Munter (14-22) picked up a 5-0 triumph in the quarterfinals, but lost a tight 2-1 decision to Justin Otto of Le Mars in the semifinals. Munter then pinned Storm Lake’s Deshawn Amida in 2:49.

Steven Huscher of Sioux City East stuck Munter in 1:02 of the wrestleback match.

“I thought our intensity was very good,” Thompson said. “I truly believe if we stay healthy, we can bring back a trophy (top three for the sixth straight season).

“We just have to not let anything get us down and take care of ourselves.”

The Dodgers will open the traditional state tournament on Thursday at 9 a.m. They will compete in the state dual tournament on Wednesday at 11 a.m. inside Wells Fargo Arena against Waukee.