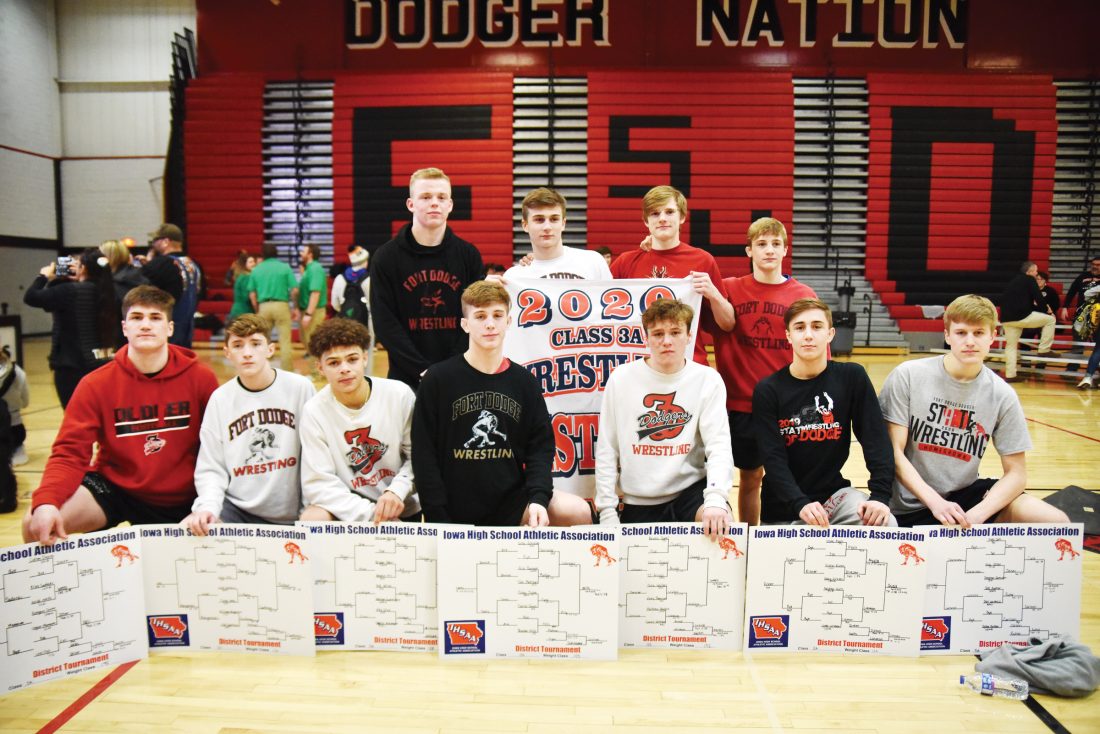 In fact, they’ve been doing it for the past five seasons.

The Dodgers have brought home a Top-3 trophy annually since 2015, and this group — 11 strong — doesn’t want to settle for anything less.

“It’s time to focus on the main goal that we’ve been preparing for all year: getting down to business at state,” said Fort Dodge senior Levi Egli. “It’s been too long since we’ve held a first-place trophy after the state tournament.

Egli was part of the Dodgers’ 2018 squad that brought home both the state duals championship, as well as the traditional state title. That five-year streak started with a bronze in 2015 and has been bookended with a bronze a year ago. Fort Dodge went back-to-back in 2016 and 2017 with runner-up showings.

The Dodgers begin the dual state tournament this morning at 11 a.m. against Waukee, and on Thursday at traditional state at 9 a.m. inside Wells Fargo Arena.

“We say it every year, because it’s the basis of our team and our program: we’re a huge family, and this team and community are what Fort Dodge wrestling is about,” said FDSH head coach Bobby Thompson. “This group grew up with Brody (Teske), Sam (Cook), Drew (Bennett) and the Laras (Triston and Cayd), and saw what it takes to carry that tradition.

“They don’t want to let it slip. They are there for each other in the way all of our past teams have been. That’s the top priority around here.”

Ayala, the top-ranked wrestler in the nation at 120 pounds and a returning state champion, joins Taylor — also a 2019 titleist — in an attempt to go back-to-back on the top of the podium.

Ayala (41-0) has compiled a 128-2 record in his three years as a Dodger, and has competed in the final round in each of his first two seasons. The junior drew the No. 1 seed.

“Drake has excitement in his eyes,” Thompson said. “He has huge goals above and beyond high school, but while he’s here, wants all of his teammates down there with him.”

Taylor (33-3), ranked second, is one of three Dodgers who are No. 2 seeds at their respective weight class. The Grand View University recruit has amassed a 115-18 career record. As a sophomore, he placed fifth at state.

“It’s sad that some of our guys couldn’t qualify,” Taylor said. “I’m so proud of everyone and this team I became a part of. There’s no one else I would rather have by my side and support me.

“I love these guys.”

Egli (20-3), who missed the entire 2018-19 campaign with a knee injury and part of this season with a broken hand, is excited to be able to end his career in Des Moines. As a sophomore, Egli was fifth for the Dodgers.

“You really can’t describe the feeling, advancing to the state tournament after sitting out for so long,” Egli said. “It really meant a lot that so many of my teammates made it through with me.”

Phillips, who qualified last season and has compiled a 36-7 record this year, has high goals after getting a taste at Wells Fargo Arena last February.

“It’s exciting,” Phillips said. “I feel this year I’m more confident. I believe in my training and everyone who has been behind me.

“We are ready to go let it fly with my teammates.”

Classmates Brooks Cowell and Austin Lee have similar state journeys. Cowell had a fifth-place medal a year ago, and Lee is looking for his first. Cowell qualified as a freshman but missed as a sophomore, and Lee missed last year.

“Austin is a serious competitor,” Thompson said. “He got a tough draw (facing the fifth seed), but he’s going to compete until the end.”

Lane Cowell (30-9), ranked seventh, is the younger brother of Brooks. He was fourth a year ago, and earned the sixth seed at 113.

“The Cowells just have to believe in themselves,” Thompson said. “Both are starting to wrestle more consistently, and when they’re on, they can beat anyone in the state.”

Mills (29-11), rated eighth, is the sixth seed. He is entering state on a hot streak after upsetting second-ranked University of Iowa recruit Colby Schriever of Mason City at 145 pounds for a district championship.

Cook (23-11), who has been in and out of the rankings, has benefited from a rugged Dodger schedule and put together a solid resume.

“Brandon is in a tough weight class, but he’s a relentless competitor who is looking to reach the podium,” Thompson said. “I wouldn’t want to draw Kody Cook in the first round. He has a great attitude.”

Bishop and Pederson have put together solid seasons, at 29-11 and 11-5, respectively. Pederson has done most of his work wrestling three weights up for the Dodgers.

“We are going down there with a solid group. You look at the draws and say, ‘we have some tough (opponents),”’ Thompson said. “But if I were from another school, I wouldn’t want to wrestle Fort Dodge in the first round.

“This group is not satisfied with being state qualifiers and just making it down here. Everyone wants medals.”

The third-seeded Dodgers face Waukee in the first round of the Class 3A state duals. In their only meeting this year, Fort Dodge earned a 37-24 victory at Waukee.

Senior Savion Wheat (160) and junior Sawyer Springer (220), along with Munter, will join the Dodgers at state duals.

Defending dual champion Southeast Polk wrestles Valley in the No. 1 vs. No. 8 matchup, and No. 4 Bettendorf will face fifth-seeded North Scott on the top half of the bracket.

Waverly-Shell Rock earned the No. 2 seed, and will take on seventh-seed Indianola opposite of Fort Dodge-Waukee.

All quarterfinals matches are at 11 a.m. The Dodgers would potentially square off with the winner of W-SR-Indianola.