Playing for Williams, Dodgers push Hawks before bowing out 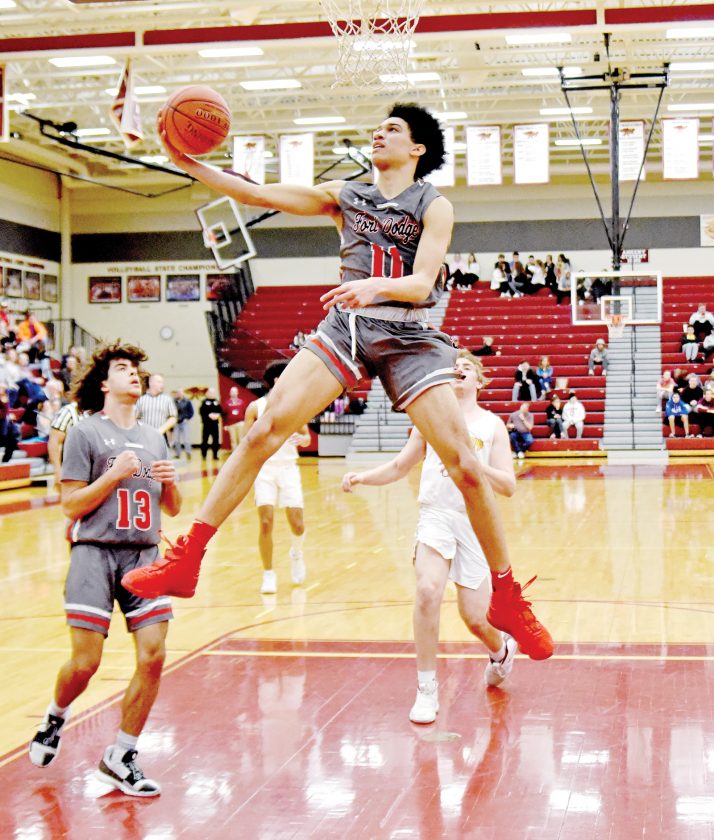 Messenger photo by Britt Kudla Tysen Kershaw of Fort Dodge puts up a shot against Ankeny during a Class 4A substate semifinal on Friday in Ankeny. For more photos, please visit CU.messengernews.net

Messenger photo by Britt Kudla Tysen Kershaw of Fort Dodge puts up a shot against Ankeny during a Class 4A substate semifinal on Friday in Ankeny. For more photos, please visit CU.messengernews.net

Messenger photo by Britt Kudla Dayson Clayton of Fort Dodge shoots during a Class 4A substate semifinal on Friday in Ankeny.

ANKENY — The Hollywood ending simply wasn’t in the cards for the Fort Dodge boys basketball team on Friday night.

After an emotional week filled with moments of adversity and perspective away from the court, the Dodgers still paid tribute to a member of the staff — and a part of their family — who was conspicuously absent from this Class 4A substate semifinal against Ankeny as best they could.

The top-seeded Hawks pulled away from Fort Dodge to win on their home court, 66-46, and advance to a Substate 1 final on Tuesday against Sioux City East in the Dodger gym. Ankeny (17-5 overall) took care of business by closing each quarter strong and moving on as expected.

The end result was a relatively minor detail in FDSH’s story, though. And in the grand scheme of things, the season-ending loss wasn’t nearly as significant as it may have normally felt. 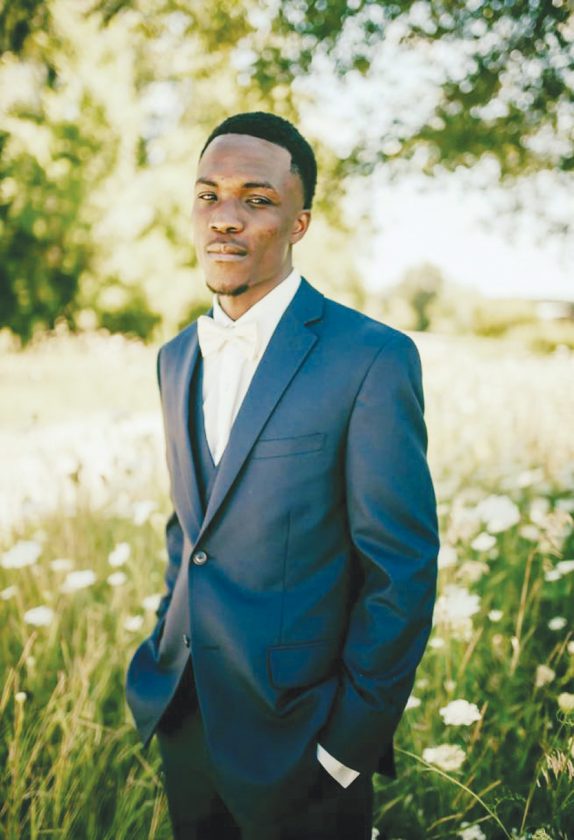 For the minds — and hearts — of the Dodgers were with Williams some 20 miles away. Win or lose.

Williams, a former Fort Dodge basketball player himself and a 2011 graduate, was life-flighted to Mercy Medical Center in Des Moines on Wednesday after suddenly falling ill. He had emergency surgery on Wednesday, when doctors confirmed he had suffered a stroke.

Williams is currently recovering in the Neuro/Trauma/Medical Intensive Care Unit.

“It was hard to stay focused on the game, because I’ve always been close with Willie,” said Dodger senior Tysen Kershaw, who fought through foul trouble against the Hawks to score a team-high 18 points. “But I also know he wanted us to give our 100 percent attention to the game and worry about him later, because that’s just the type of person he is. 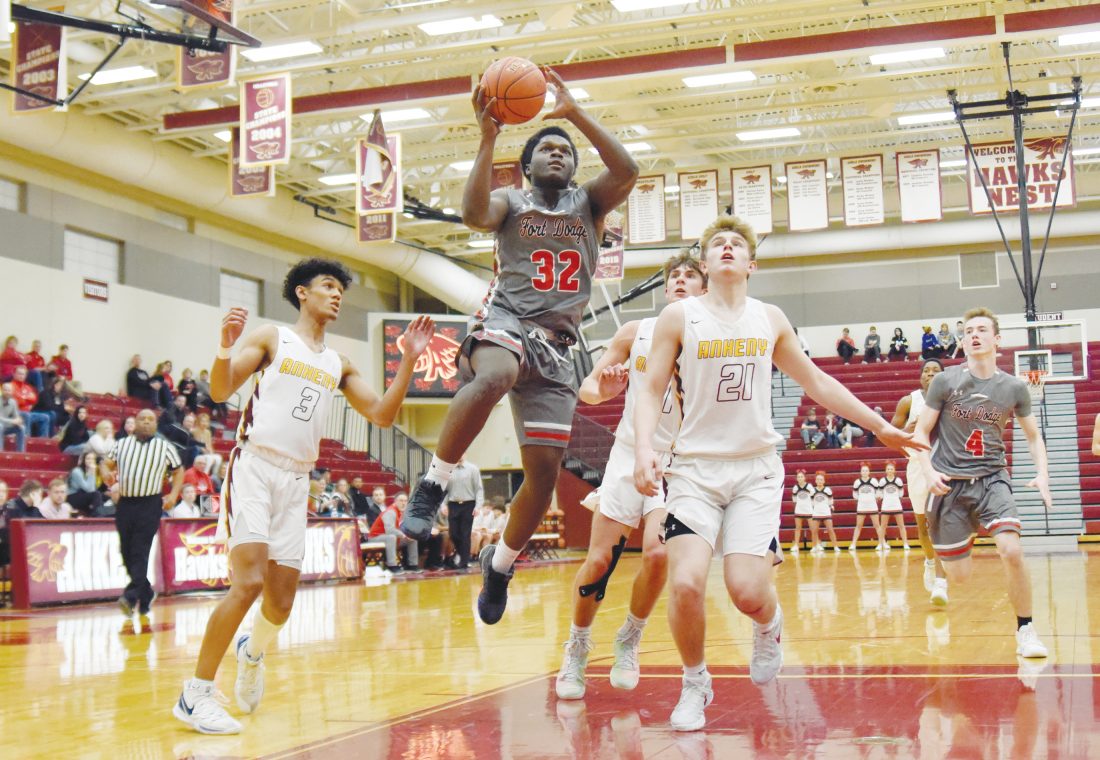 Messenger photo by Britt Kudla Dayson Clayton of Fort Dodge shoots during a Class 4A substate semifinal on Friday in Ankeny.

Daniel confirmed it’s been an “emotional rollercoaster” for Fort Dodge since Monday night’s quarterfinal upset of Sioux City West. He added Williams’ situation was a “sobering reminder” both of the fragility of life and the priorities of his program, regardless of its fate on Friday.

“It just put everything into perspective in a hurry,” Daniel said. “You never want to see something like this happen that just takes your breath away; selfishly, Willie means so much to our program and our commuinty, of course, but also he’s a married man with two young kids at home. This is about so much more than basketball. We just can’t take any day we’re given for granted.

“On Monday, he’s celebrating with us in the locker room in Sioux City. Nobody was more excited than Willie for our kids that night. And basically 24 hours later, this happens. It’s a tough lesson, and we’re all trying to cope and deal with it all in our own ways. But Willie told us to leave it all on the court for him, and I do think we can say our guys did that to the best of their ability — especially given the circumstances.”

There were moments when the Dodgers appeared ready to make a serious push in the third quarter, as they pulled within 38-30. Kershaw picked up his fourth foul on a questionable reach-in call, though, and the Hawks responded with seven straight points to get back in a comfort zone.

A traditional three-point play from Kershaw made it 50-39 with a little over five minutes to go in regulation, but again, Ankeny immediately responded. The Hawks then scored nine of the contest’s final 11 points to deliver one final knockout punch. 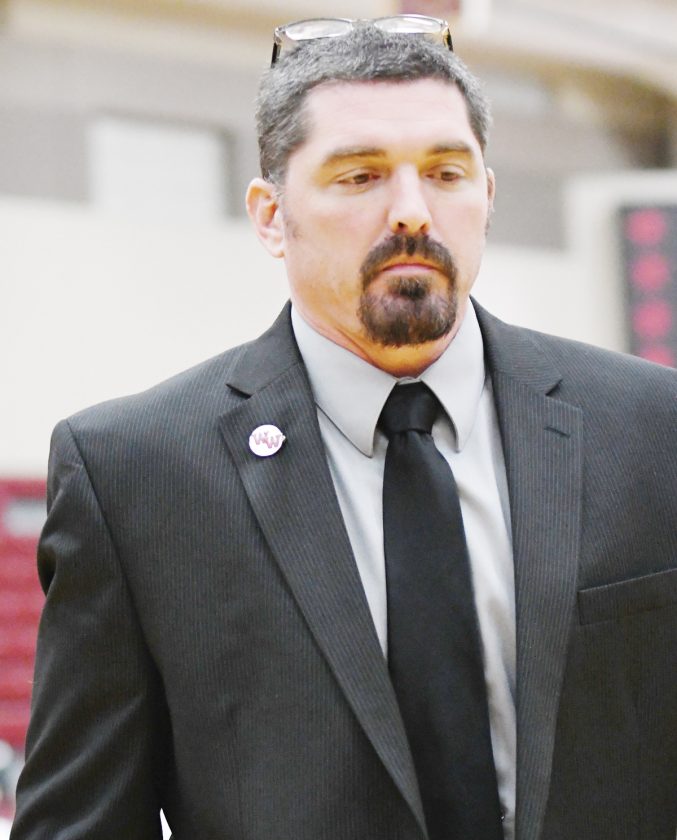 Senior guard Braxton Bayless, the son of former Iowa State standout Ron Bayless, had 26 points to lead Ankeny. Bayless was camped out at the foul line most of the evening, sinking 11 of 13 free throw attempts.

Nineteen of Bayless’ points came in the first half.

Classmate Jaxon Smith added 16, including eight in the fourth quarter. Brecken Manus sank all five of his shot attempts to finish with 11.

Junior Dayson Clayton and senior Brycen Bell both contributed nine points for the Dodgers, who bow out at 3-20. Sophomore Carson Peterson chipped in with eight.

“It was a rough week, knowing that Willie wasn’t going to be there with us,” Clayton said. “But I also felt like it brought us closer together. Willie is a great coach and everyone respects him. When he talks, we listen.

“When he’s around it just gives us extra motivation, because he’s far more than just a coach.”

Clayton’s older brother, Jontel, has been best friends with Williams since they were little.

“Willie is like an older brother to me,” Clayton said. “He and my brother have always been really close, so I got the chance to know him (a long time ago) and he’s been there for me from day one. Whenver I call, he answers. And I know he’s going to be honest with me.

“I’m just very thankful I have him in my life.”

Fort Dodge will be graduating Kershaw, Bell, Asle Thorson, Jaheim Clayton and Nolan Daniel from its traveling roster. Jordan Mills and Kaleb Hammersland are the other seniors.

“Look, there were a lot of times when we were struggling and these kids could’ve just given up on the season and each other,” Daniel said. “But they didn’t do that. They kept fighting, and for the most part, the effort remained constant. We didn’t execute the way we needed to on offense, and the defense just wasn’t enough. There are a lot of things we have to do better as a program, from myself right on down, moving forward. But we were a better basketball team late in the year than we were from December into January, and I think we were very competitive (Friday) for about three full quarters outside of a slow start and the very end.

“They’ll look back someday and remember that substate win. And they’ll remember Willie wasn’t on the bench for this game. It’s the highs of winning and the reality of life, all within a matter of days. But it’s what you go through as a family, and given that’s what we want our culture to be about, now we move on and focus our attention to Willie and his family. Because that’s what we do here. That’s who we are.”