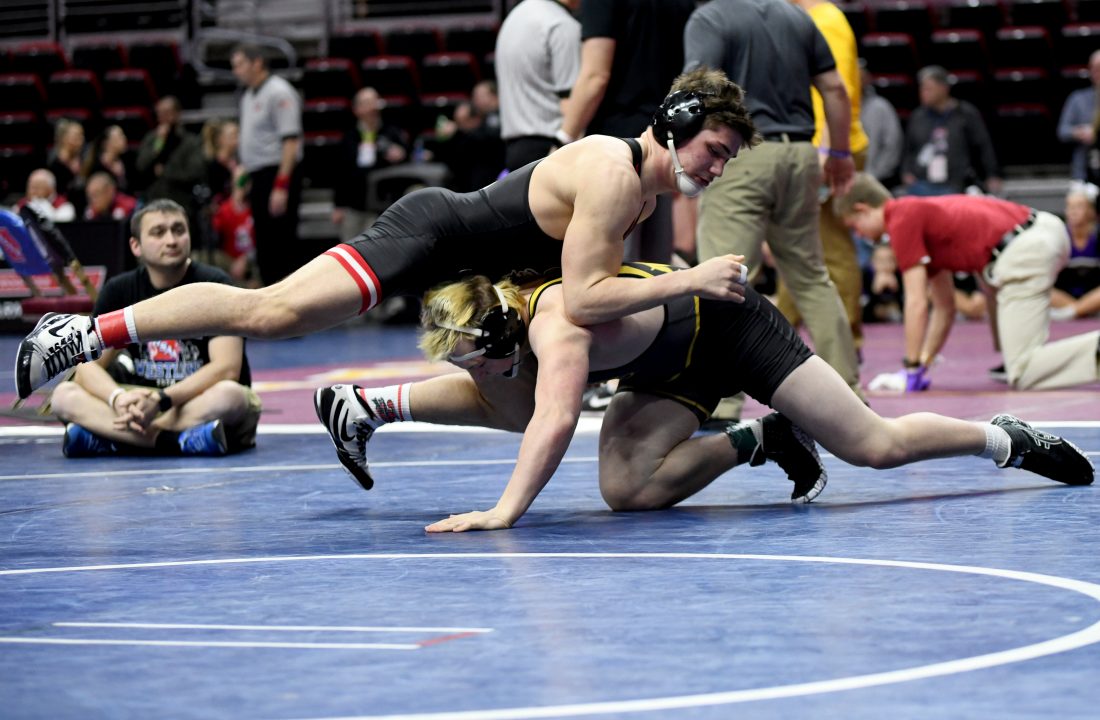 DES MOINES — Levi Egli fought through seemingly-endless stretches of adversity the past two seasons, and although he didn’t get the medal he dreamed about on Saturday, he finished strong by securing a bronze medal for the Dodgers.

Egli, who was fifth as a sophomore, missed the entire 2019 campaign after tearing his ACL, LCL, PCL and biceps femoris tendon in his knee during the last regular-season football game. Egli then suffered another setback less than two months ago, breaking a bone in his hand.

“(The physical struggles) have always been in the back of my mind,” Egli said. “I thought about it all of the time because it kept me motivated. The adversity I faced and the hard work to come back … it was just all a part of God’s plan.”

After a crushing loss to third-ranked Ashton Stoner-DeGroot in the semifinals Friday night, Egli made the decision to turn the page and try to rack up team points for the Dodgers. In his consolation semifinal match on Saturday morning, he picked up an 8-0 major decision over sixth-ranked Jake Walker of Waverly-Shell Rock.

“Levi is a competitor,” said FDSH head coach Bobby Thompson. “He finished on a high note, which is tough to do when you have title hopes.

“He went through a lot just to get to this point.”

Egli (27-4), ranked second, ended his Dodger career with a fall in 3:28 over eighth-ranked Kane Scmidt of Bettendorf. He had three pins and a major decision in his final tournament run.

“I was just super relaxed (Saturday). I knew it was my last go-round and whatever happened, happened,” Egli said. “I just wanted to put more focus on the team.

“Being a Dodger has been great. Our team was close and I have a lot of good memories. It’s been a fun journey.”

Egli became the 29th Dodger in program history to earn bronze, joining his brother, Duke, who took third in 2013.

Cook (27-16) lost to second-ranked Cody Anderson of Waukee (5-0) and No. 6 Ethan Vetterick of Norwalk (3-1) in the consolation semifinals and fifth-place match at 152 pounds. Including state duals, Cook took on the second-ranked wrestler twice, No. 5 Evan Yant of Waverly-Shell Rock, Vetterick twice, and the ninth-rated wrestler at his weight. He dominated fourth-ranked Camden Baarda of Southeast Polk in the consolation round.

“Kody wrestled his tail off in a very tough bracket,” Thompson said. “He had a difficult draw and had to wrestle the same kid from the first round.

“Kody had a good tournaments for a guy who wasn’t seeded.”

Mills (34-14), ranked eighth and seeded sixth, suffered decision losses to Ankeny Centennial’s fourth-ranked Ben Monroe and No. 6 Carson Martinson of Southeast Polk (4-2) on the consolation side. Mills made it to the 145-pound quarterfinals after knocking off second-ranked University of Iowa recruit Colby Schriever of Mason City.

“Brandon had a great tournament,” Thompson said. “At the beginning of the season, I don’t know know if you could’ve predicted this or planned it out. Just an outstanding senior year.”

Lane Cowell (35-12), ranked eighth at 113 pounds, avenged an early-season loss to eighth-ranked Aime Mukiza of Des Moines North/Hoover. Cowell dominated the match, picking up a 17-2 technical fall in 5:20. He was fourth at state a year ago.

Brooks Cowell (32-10), rated sixth, suffered a tough 4-3 loss to No. 8 Keaton Moret of Norwalk in the 132-pound seventh-place match. Brooks had a fifth-place showing a year ago, and was a qualifier as a freshman.

“I know they are both disappointed,” Thompson said. “Lane will be back, and one day, Brooks will realize just how much he contributed to this team and this program.”