Duckett will not compete at sectionals for Gaels 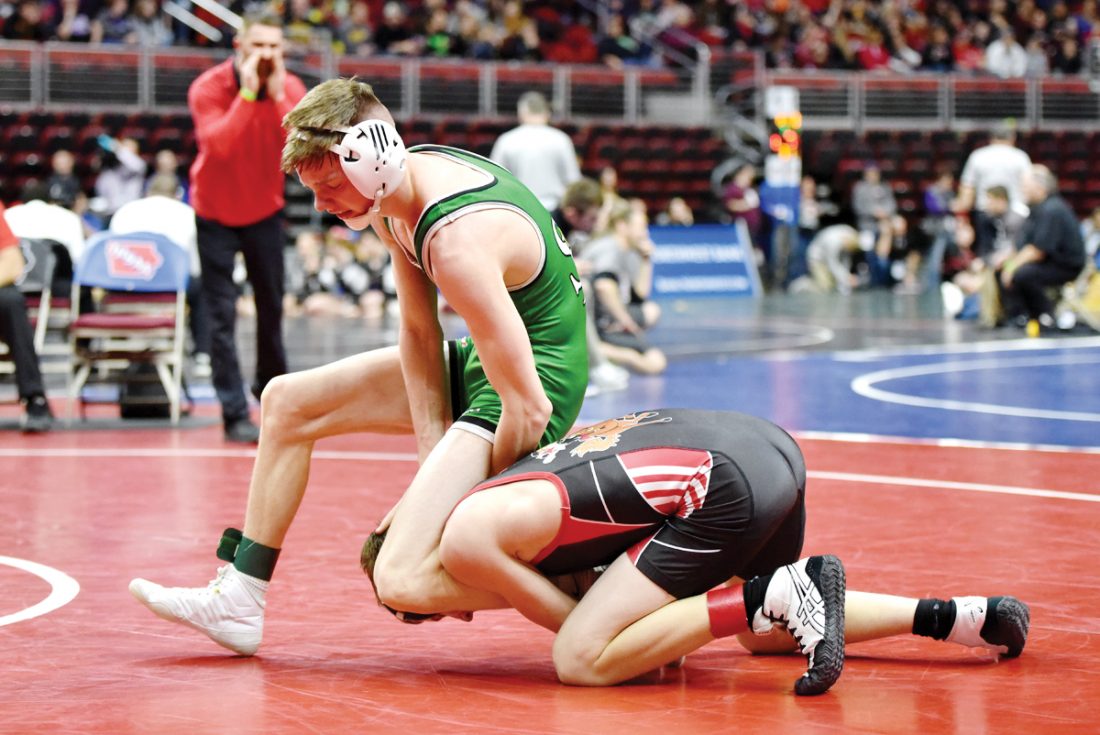 Messenger photo by Britt Kudla St. Edmond junior Ryan Duckett, shown here at last year’s state tournament, will not compete at sectionals as he is still recovering from a knee injury.

St. Edmond junior Ryan Duckett has made the decision that he will not compete at sectional wrestling, as he is still recovering from an early January injury.

Duckett suffered a LCL strain with a deep bone bruise on his knee cap in a dual against Roland-Story on Jan. 9, and hasn’t been on the mat since. The Gaels’ 2019 state qualifier tested his knee Friday night at practice, but with his coaches and family by his side, they decided the best move was to not compete and heal up for next year.

“It’s really tough not being out there with my teammates, and it was an extremely hard decision,” Duckett said. “I have had everyone on my side doing everything they could to get me back on the mat by Saturday.

My trainer, Brian (Murman), coaches, (Eugene) Carlson and (Kaden) McClintock, and my family, my mom, dad, uncle and aunt have all done so much to help me recover mentally and physically. Unfortunately life had other plans and we decided it’s best that I sit this one out.”

Carlson said it was a tough decision for the 113-pounder, but the future is bright for the junior.

“Ryan’s injury happened with 50 seconds left in his match against Roland-Story and for him to finish, is a big salute to him,” Carlson said. “Unfortunately his injury hasn’t progressed to where his parents and I were comfortable moving forward this season.

“We’re always going to be cautious on the kids side. He’ll have a great opportunity to come back strong next year for his senior season. So we all decided not to jeopardize that.”

The Gaels will head to Manson Northwest Webster for a Class 1A sectional meet. Doors open at 11 a.m. in the Manson NW High School gym with action slated to begin at noon.

“We had a serious talk with the kids and they know there are big challenges ahead,” Carlson said. “It will be a tough mountain to climb, but realistic everyone can place and that’s goal for our young team to try and place, whether it be at the top or bottom.

“We are looking for them to step up and do the best they can and get some momentum moving forward.”

Joining the host Cougars and the Gaels will be Clarion-Goldfield-Dows, Eagle Grove, Pocahontas Area, West Bend-Mallard and Belmond-Klemme.

There will be nine ranked wrestlers in the section. Christopher Krueger (152) and Brodie Anderson (182) are both ranked ninth for Manson Northwest Webster. Clarion-Goldfield-Dows’ Tyler Stein (113) is 10th, Reed Abbas (145) is fourth and Garett Seaba (152) is 10th.

Blake McAlister (160) and Jordan Khommanyvong (138) are ranked sixth and ninth respectively for the Titans. East Sac County’s Nate Thomsen is nith at 132 pounds.

In Class 2A, Humboldt will host a sectional meet. Competing with the Wildcats will be Southeast Valley, Webster City, Emmetsburg, Estherville-Lincoln Central and Okoboji.

Algona will head to Clear Lake for a sectional meet. Wrestling with the Bulldogs and Lions will be Forest City, Garner-Hayfield-Ventura, Hampton-Dumont and Osage.

At Clear Lake (Districts at Algona)

At Humboldt (Districts at Algona)

At Sibley-Ocheyedan (Districts at Sioux Central)