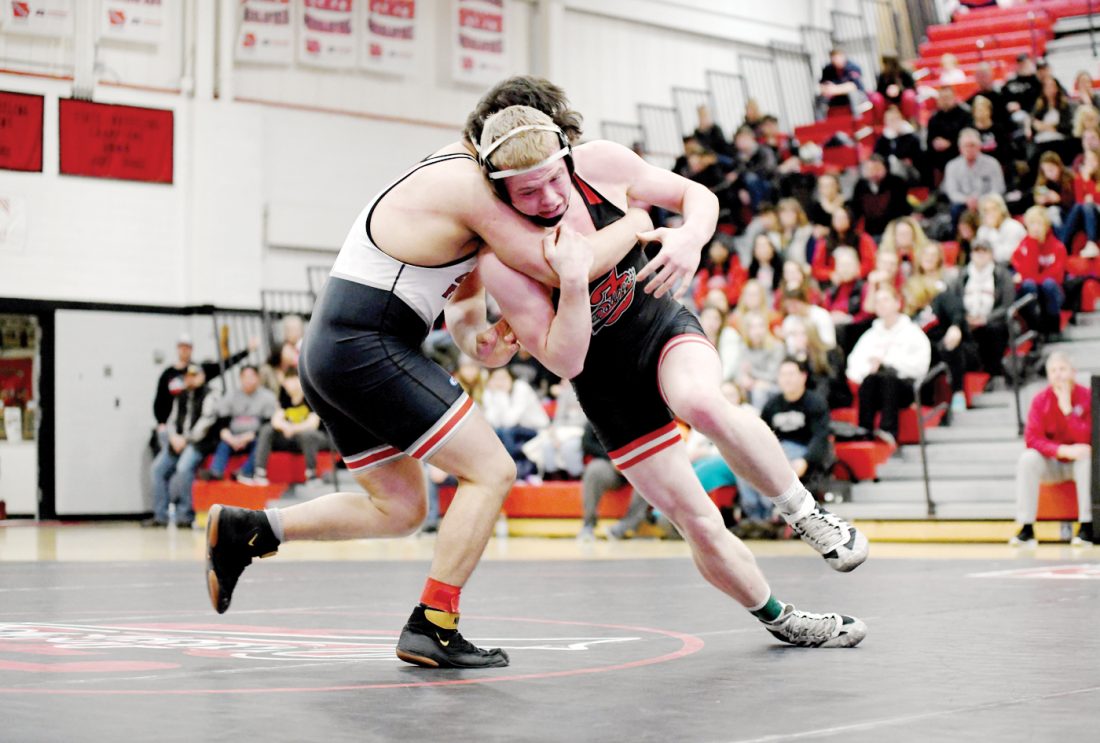 Messenger photo by Britt Kudla Austin Lee of Fort Dodge works against Ben Bowman of Cedar Falls in the Dodger gym during a regional final on Wednesday. For more photos, please visit CU.messengernews.net

Fort Dodge left little doubt about how many days it would be wrestling in Des Moines next week.

The third-ranked Dodgers will be competing at Wells Fargo Arena for four days after crushing 16th-ranked Cedar Falls, 57-8, on Wednesday night for a Class 3A regional dual championship.

It was a pin party for FDSH, which won 12 matches overall. Six victories came by fall, with five in the first period.

“We wrestled with great intensity,” said Dodger head coach Bobby Thompson. “We came out and got some big bonus points. We won all of the ranked matchups, and they weren’t close.

“Our guys were focused and came out and took care of business.”

The Dodgers will likely get the No. 3 seed at the state dual tournament on Wednesday inside Wells Fargo Arena, with the traditional state tournament starting on Thursday.

“Hopefully we get a good seed and that will put us in position for another trophy,” Thompson said. “We’ve set the standard in our wrestling room, and we want to prove that we can be the best team in the state.”

Thompson will take his fourth straight team to state duals, as the program is coming off a fourth-place finish a season ago. The Dodgers claimed the state title in 2018, and were runner-ups in 2017.

“It was good to finally field a healthy lineup for the most part,” Thompson said. “(220-pounder) Sawyer (Springer) is still battling injuries, but to have everyone else back was huge.

“We’ve had a tough schedule, and we’re starting to see the benefits of that.”

Senior Levi Egli didn’t make the trip last season, recovering from a knee injury that sidelined him for the entire year. But Fort Dodge’s second-ranked 195-pounder was there to help clinch gold in 2018, and he wanted to return for his teammates.

Egli, who has been recovering from a broken hand for the last month, didn’t know if he would compete on Wednesday until hours before the meet. Once he got cleared by the doctors, the all-district linebacker was ready to go.

“Initially I wasn’t going to wrestle unless we need the points,” Egli said. “But I made my mind up once I got cleared that I was going to wrestle. It meant a lot to be out there with my teammates and achieve this goal.

“I know what it felt like to win the state dual title (my sophomore year), so I wanted to get back and make sure we were competing for a trophy.”

Egli was hoping to get his stamina up before districts on Saturday. That didn’t go as planned, though, as Egli (18-3) grabbed an ankle pick and drove Drew Campbell to the mat for a fall in just 1:13.

“I was supposed to wrestle (No. 7 Colin) Bohnenkamp, but they moved him up (to 220),” Egli said. “I wanted to get some mat time and shake off some rust, but I got that ankle and went with it.

“Now it’s time to focus on getting as many guys as we can down to state (at districts on Saturday).”

Egli, who placed fifth as a sophomore for FDSH’s state title squad, is a key piece to the puzzle moving forward.

“Levi is a senior captain and a big part of this team,” Thompson said. “It was great to get a match under his belt before districts and see him competing again.”

There were three ranked matchups on the night, and Fort Dodge got bonus points in two of the three. Sixth-ranked senior Brooks Cowell (26-7) made easy work of ninth-ranked Jack Plagge — the son of Fort Dodge graduate Tim Plagge — pinning him in 1:15 at 132.

Seventh-ranked junior Lane Cowell (29-8) picked up a 15-6 major decision over Logan Vallejo to finish the dual at 113. Eighth-rated senior Brandon Mills (27-11) recorded a big victory over Landon Schaul, 7-4, in a 145-pound match that went back and forth.

Freshman Tucker Pederson (8-5), who jumped up nearly two weight classes to compete at 170 pounds, earned a hard fought 6-3 victory over the bigger Ryley Barnett. Senior Savion Wheat controlled the entire match against Trevor Fisher at 160 pounds to pick up a 6-3 triumph.

Fort Dodge is back in action on Saturday when they host a Class 3A district tournament. Action begins at noon.