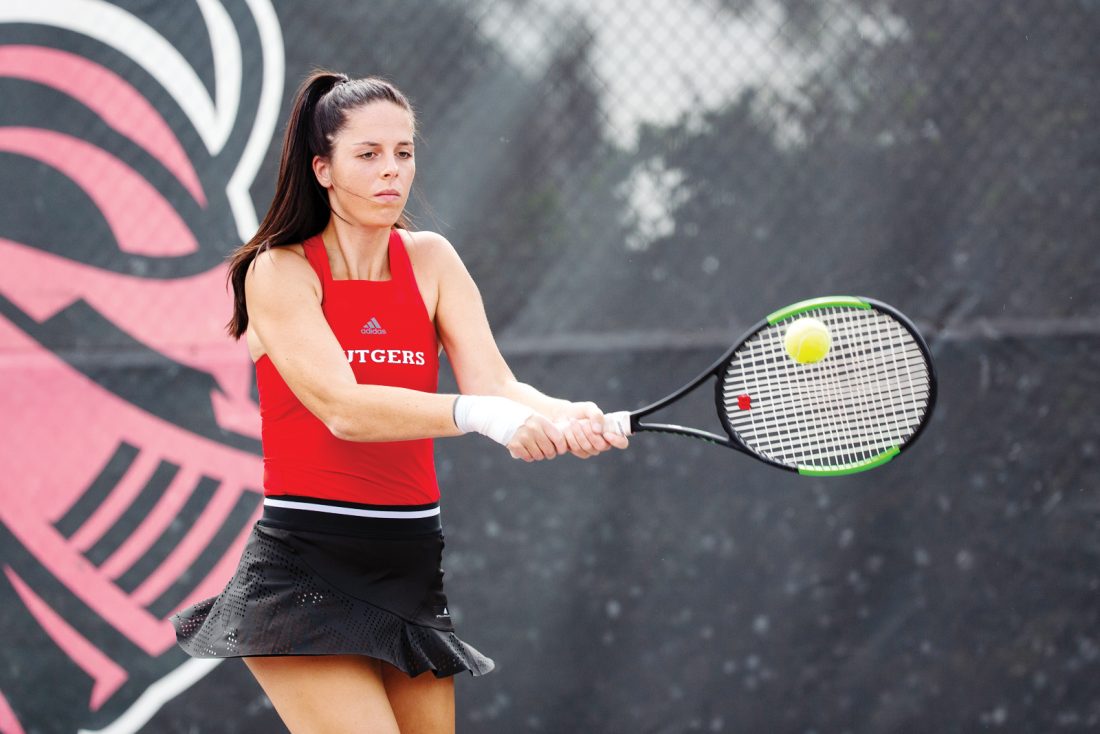 —Submitted photo by Rutgers Athletics/Dustin Satloff FDSH graduate Jaci Cochrane returns a shot for Rutgers. Cochrane is in her senior season with the Scarlet Knights.

The Rutgers University senior experienced a first on Saturday, though, clinching a 4-3 victory for the Scarlet Knights against the University of Pennsylvania with a three-set singles win — one that kept her unbeaten on the young dual season.

“It was very exciting for both myself and my team,” said Cochrane, a 2016 Fort Dodge Senior High graduate. “That was the really cool part — it wasn’t about just me. I’ve never been in that position before (in college): winning a (singles match) to clinch the meet. It’s happened in doubles, but the only other opportunity I had was at Army my freshman year and I lost.

“We were down 2-0 early, but my teammates rallied us back and we got to 3-3 right when it was time for my match. It was intense and nerve-wracking, but it was great to come through and keep the (2020) momentum going for (the squad).”

The 22-year-old Cochrane, a 2013 state singles champion for the Dodgers and the ’16 state doubles winner with Beth Murman, is 4-0 in singles and 3-1 in doubles for Rutgers in duals. The Scarlet Knights are 6-2 overall with Big Ten competition right around the corner.

“We’re off to a good start,” Cochrane said. “We have some really big goals as a program this season; having never qualified for the conference tournament, that’s something we’d really like to achieve (in April).

“Being a senior gives you kind of a different perspective on things. You’re a few months away from the real world. So it makes you appreciate every meet a little more, and also, it increases your sense of urgency each and every time out.”

Cochrane has accumulated 24 singles wins and 26 doubles triumphs in dual competition during her three-plus years on the court. So far in 2020, she has been predominantly the No. 5 singles player while occupying the No. 3 doubles role for RU.

“Being the newest school in the Big Ten, we’re still kind of finding our place — like most of our programs,” Cochrane said. “There are a lot of big schools with strong traditions and reputations (in the league) obviously, so sometimes it’s more about mentally turning a corner than physical. That’s what we’re trying to do this year: believe that we can do it, knowing our (conference opponents) are never going to hand us anything.

“We have to earn it, and show we have more guts. We need to want it more.”

Cochrane’s main focus continues to be away from the court and in the classroom. She is already a two-time academic all-Big Ten selection, and Cochrane currently carries a cumulative 3.7 grade point average while working toward a degree in political science with a minor in history.

Cochrane has applied to a number of law schools from all across the country, and hopes to have her future plans decided in the next month or two. She will follow in the footsteps of her father, Stu, and brother, Nick, who are both attorneys in Fort Dodge. Her sister, Hilary (Cochrane) Rogers, is practicing law as well in Dallas.

“I’m definitely proud of the way I’ve been able to balance (academics and athletics),” Cochrane said. “It can be a struggle, of course; when you put the kind of time we do into (a sport), sometimes the last thing you want to deal with at the end of the day is homework. But like almost all of us (playing collegiately), I’m not turning pro (in tennis). I have to be realistic about it, and that means my education comes first.

“Obviously with my dad, my brother and my sister being (in the profession), they’ve had an impact on my point of view when it comes to (going to law school). But I feel like I would have been interested in this path on my own anyway.”

Cochrane, who was FDSH’s first-ever female state tennis champion and the No. 2 overall prospect in Iowa as a senior, said she’s doing her best to be a positive mentor to the underclassmen on the Rutgers roster.

“It’s really an interesting dynamic, because we’re a very young team overall,” said Cochrane, whose mother, Toni, was a two-time state volleyball player of the year at FDSH and four-year starter for the Iowa Hawkeyes. “I’ve definitely tried to stress the importance of just going out and enjoying the experience of competing. Win or lose, it’s not the end of the world. There’s always another match to get ready for.

“We’re considered the underdog here at Rutgers, but we’ve been improving a lot in all of our sports. It’s meaningful to be a part of (an athletic department) that’s constantly building toward better things. It reminds me of being a Dodger, where you’re always trying to make a name for yourself and beat the odds against bigger schools.”

Cochrane added she still feels “very connected” to her hometown.

“The support from back home has been incredible, from people watching my matches and following us to messaging or calling me (after meets),” Cochrane said. “It’s still really cool to say I’m from Fort Dodge and be able to represent small-town Iowa in this way.”

The Scarlet Knights take on Seton Hall this Friday at home. Their first Big Ten meet is against Nebraska on Feb. 26.