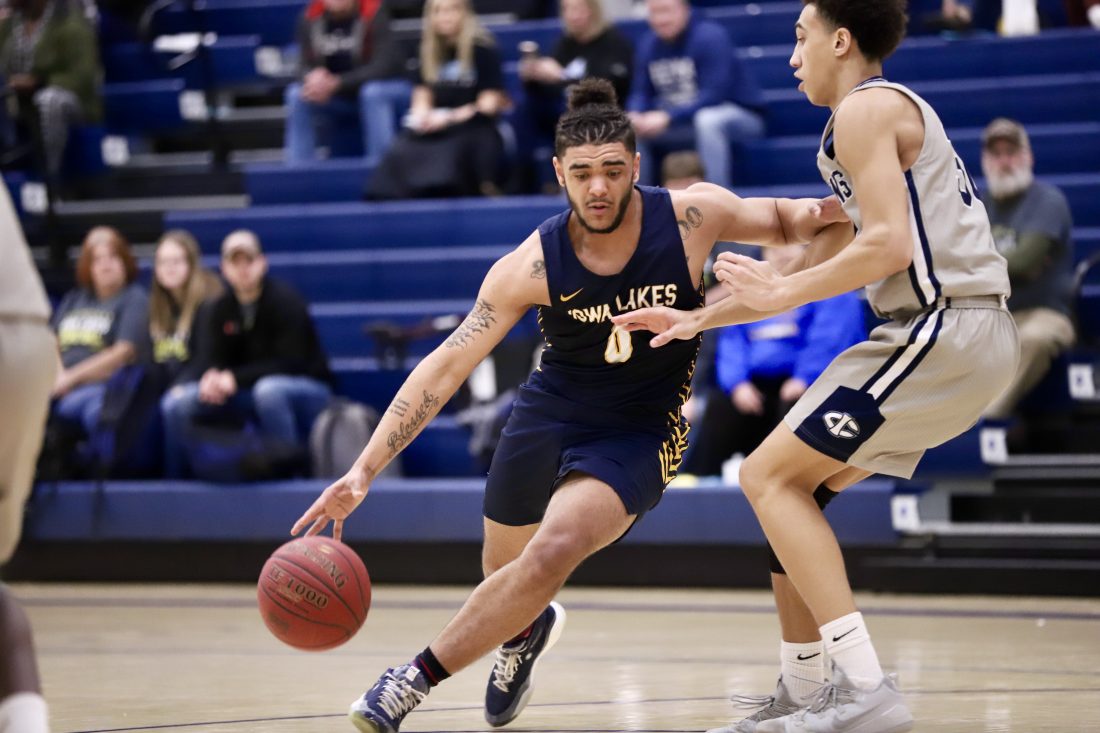 —Photo by Paul DeCoursey Malcolm Clayton has Iowa Lakes competing for the ICCAC title and ranked 12th in the nation with 24 wins. Clayton is a former Fort Dodge Senior High all-stater.

ESTHERVILLE — Night in and night out, the Iowa Lakes men’s basketball team has the capability to light up the scoreboard.

One of the key pieces to that offensive attack over the past two years has been Fort Dodge Senior High graduate Malcolm Clayton.

The Dodger all-stater and two-year starter has the Lakers in the hunt for the ICCAC league title and ranked 12th in the country.

Iowa Lakes (24-5 overall, 10-3 in league) averages 93 points per game, which ranks ninth in NJCAA. They are first in the nation in 3-point percentage and in the Top-20 in six other key offensive categories.

Clayton, though, understands that what happens on the other end of the court will determine just how far his team goes.

“Defense and energy,” he said. “Every game I try to tell our team and our freshmen that because we have the offensive power to win every game, the games we have lost or been close in is because we come out dead and don’t wanna focus on defense or the game plan our coaches gave us.”

The Lakers opened the year 0-2 with losses to NJCAA Div. I programs Cowley, who is ranked fifth, and Coffeyville, who has over 20 wins. After that, they reeled off nine consecutive wins and went 19-1 over their next 20.

Clayton is averaging over 12 points and almost five rebounds per game, adding just under three assists. He is shooting almost 50 percent from the field, 44 percent from the 3-point line and 78 percent at the charity stripe.

He scored a high of 26 in November and has reached double figures 15 other times.

After breaking into the startling lineup a year ago as a freshman, Clayton learned the ins and outs of the college game on the fly. He posted seven points, 3.6 rebounds and 2.2 assists per game last season.

“It helped a lot just by knowing the pace of play and how physical and athletic everybody is compared to high school,” he said. “It also helped me learn my coaches system and how to play the right way within it.

Clayton was also gifted with a second chance to play alongside his brother, fellow FDSH grad Solomon Clayton, a season ago. The two helped Iowa Lakes win 22 games last year.

“That was my favorite memory,” Clayton said of playing with Solomon. “That, and being able to meet all the teammates and friends I’ve made on my team and at Iowa Lakes, as well.”

As for his own future, Clayton plans to continue playing basketball, but “I haven’t thought too far into it.”

“I just know I’m gonna go wherever my best offer is,” he said. “But I’m definitely going to continue playing and going to school.”

Clayton finished his Dodger career third on the all-time scoring list with 1,074 points. A four-year varsity regular, he was named both all-state and all-CIML Iowa Conference his senior season.