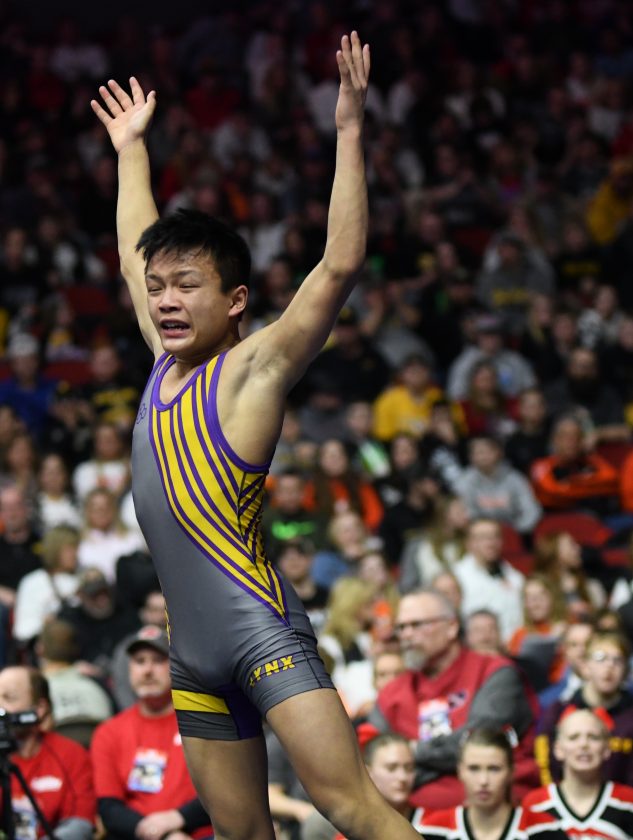 The Webster City sophomore became a state wrestling champion, securing a perfect season with a 5-0 victory over Greene County’s McKinley Robbins in the Class 2A 106-pound final here inside Wells Fargo Arena.

Phetxoumphone, a fifth place finisher a year ago in his state debut, ran through the field, earning a fall, a major decision and two more decisions. He went 42-0 and is now 81-6 overall.

“It’s perfect, just perfection in every way,” Phetxoumphone said. “I finished it off in the best way possible.”

Chelsevig, the only other unbeaten Lynx champ, won three gold and Taxted two.

“I’ve put quite a bit of work into it, but mostly hit in in my live matches,” Phetxoumphone said of his tilts. “It just sets up perfectly. Top is my position and I can work on top no matter who it is.”

Robbins, a freshman, finished the season 37-2. Both of those losses came by decision to Phetxoumphone, as the Lynx wrestler bested him in the Dallas Center-Grimes Invitational championship in December, 7-4.

A win would have made Robbins the first-ever boys state champion in any sport at Greene County. Jefferson owns three state championships as a program.

Phetxoumphone finished first at seven tournaments in all this season, adding his state crown to those won at the North Central Conference, Don Miller Invitational and both sectionals and districts.

He outscored his four state opponents, 27-2.