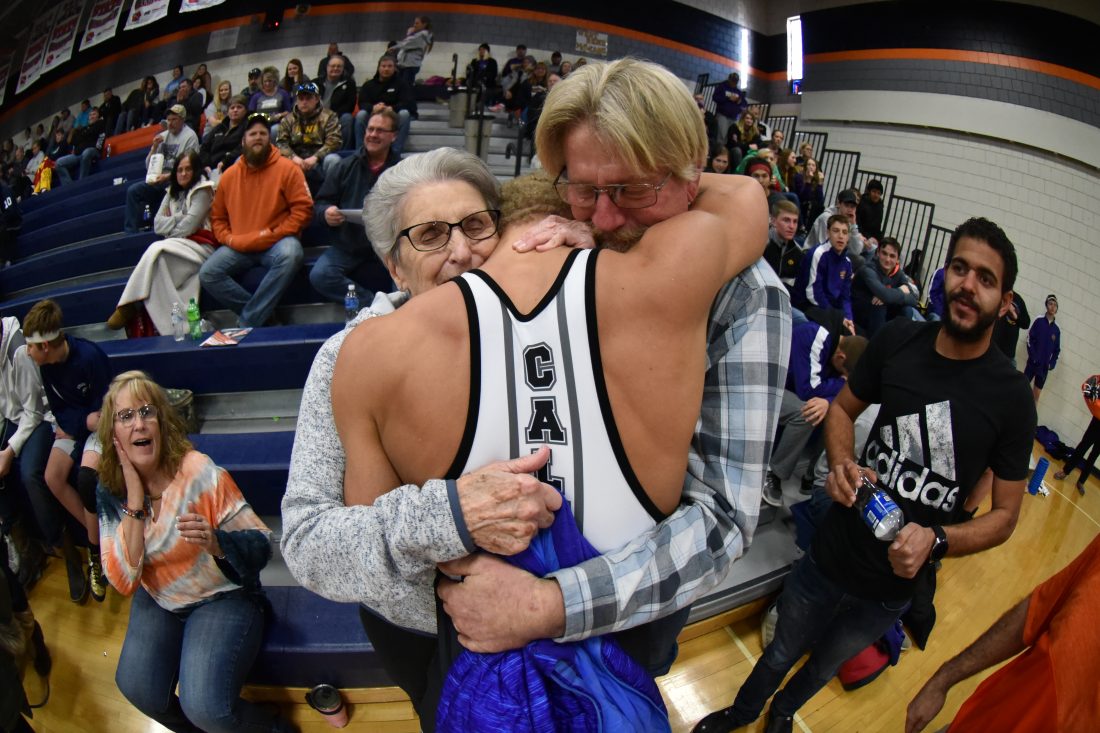 MANSON — Clarion-Goldfield/Dows and Manson Northwest Webster battled each other to the end here Saturday for a Class 1A sectional title.

When all the matches were cleared, it was the Cowboys from the North Central Conference finishing just ahead of the Cougars from the Twin Lakes Conference.

Clarion-Goldfield/Dows scored 225.5 points and advanced eight wrestlers to districts next week while Manson Northwest Webster finished with 220 and qualified seven. Both also qualified for regionals to compete for a spot at state duals on Tuesday night, with individual qualifiers heading to Sioux Rapids next Saturday for districts.

Abbas claimed a 36-second pin in his 145-pound wrestleback after falling in the finals. The two-time NCC champion is now 36-8 on the season.

Collins had no trouble at 126, earning a pair of falls including a 49-second pin vs. Belmond-Klemme’s Kaden Hanson in the finals. He is now 38-5 on the season.

“It felt great to be in the home gym while getting my first sectional championship,” Collins said. “All of my teammates and I have worked very hard for this and one of our team goals was to make regionals so it felt good to accomplish that with my homies by my side.”

Thoma scored a third period fall and won by 3-0 decision at 132 pounds. Calmer had two pins and a decision to take the 160-pound bracket and was the lowest seed (fourth) to finish first.

Anderson and Schuttler each earned two first period falls at 182 and 195 pounds, and both now enter districts with 38 wins on the season.

Jacob Graham earned a wrestleback to stake his spot at 113, winning by major decision.

West Bend-Mallard’s Donavon Hanson and Connor Fehr each were champions with Logan Studer moving on as a runner-up.

Hanson claimed the 106-pound division with a fall and a major decision, as he is now 26-2 on the year. Fehr earned two falls to place first at 170 and Studer claimed a wrestleback by fall in overtime to advance at heavyweight.

Nolan Blair from WB-Mallard had the fastest pin at 20 seconds.

“We hit our goal of having everyone place, those places just weren’t high enough for them to move on,” SEHS head coach Eugene Carlson said. “Ronnie wrestled well, as did Tyler. We’ve just got to get Ronnie to be more aggressive, which will come.”

Orres, a freshman, went 1-2 on the day at 106 pounds to finish his season 20-15 overall. He scored a first period fall in 1:48 over Clarion-Goldfield/Dows’ Rigo Bobadilla before falling twice.

Rossmanith, a sophomore, also went 1-2 at 152. He had a fall over Eagle Grove’s Justin Agtun in 3:04 for his seventh victory of the season.

“Tyler is a quiet leader for us and has really worked hard to get stronger,” Carlson said. “Now, we’ve just got to get better as a team over the offseason.”

Johnny Dickerson ended in fifth for the Gaels with both Cayne Reed and Grant Webster placing sixth. Dickerson claimed a 12-6 decision for fifth at 145 pounds while Webster scored a technical fall during his day.

Webster had just one of two technical falls recorded by wrestlers in the tournament.

At a sectional meet in Sibley, North Union’s Trevor Kruse and Jake Anderson advanced as runners-up.

Kruse will compete at 170 pounds after earning a win in a wrestleback by major decision, while Anderson picked up a fall in his wrestleback to qualify.

Titans push four through to districts

The Titans placed third overall with 162 points as Woodbury Central and Westwood Sloan advanced by finishing first and second in the team standings with the Raiders placing sixth.

McAlister won at 160, scoring a fall and a major to improve to 42-3, while Brian King now sits at 40-8 after claiming two falls to win the 220-pound division.

SC Calhoun’s Hunter Voith recorded the quickest pin of the day at 18 seconds.

For East Sac County, Nate Thomsen, Sterling Rodman and Kipp Corbin each came out on top.

Thomsen had a technical fall and a decision to improve to 40-4 at 132 pounds, Rodman had three falls, with two of them coming in the first period, to win at 170 and Corbin scored a pair of falls in both of his matches at heavyweight.

Rodman was one of just three wrestlers to score 26 team points — the most of any one person.

All four will be competing next Saturday for a spot in the state tournament at districts in Mapleton hosted by MVAOCOU.

Goodell had two falls at 113, with both coming in the first period. Craven also won twice, improving to 31-3 with pins in both of his matches.

Naeve earned a fall and a decision at 160 with Goodell winning by fall in the first period twice at 220 pounds.

Phetxoumphone, the top-ranked 106 pounder, spent just 98 seconds on the mat. He earned a bye in the quarters, pinned Dylan Jones of Okoboji in the semis and was given a medical forfeit in the finals.

Rattenborg claimed the 132-pound crown with a pin vs. Okoboji’s lake Abrahamson in 4:16. He also had a fall and a bye.

Gasca, Estlund and Hisler all had to win wrestlebacks for second.

Southeast Valley’s Caelan Oakes and Mark Hughes moved on with second place medals. Oakes advanced at 113 and Hughes at 220.

Districts will take place in Algona for state tournament bids.

Five Bulldogs to compete at home

The Bulldogs finished tied for third with North Central Conference foe Hampton-Dumont in the team standings.

Zabka won the 106-pound title, claiming a pair of falls in his two matches. McKenna was second at 152 to advance.

Lewis improved to 31-8 with a pair of wins, including a sudden-victory triumph in the finals at 195 over Clear Lake’s Dylan Kruckenberg. Hamilton won by fall in just over a minute in both of his matches at 220 to enter districts 35-1 overall.

Meints finished off the day by claiming second place at 285 pounds and is now 30-7 on the year.