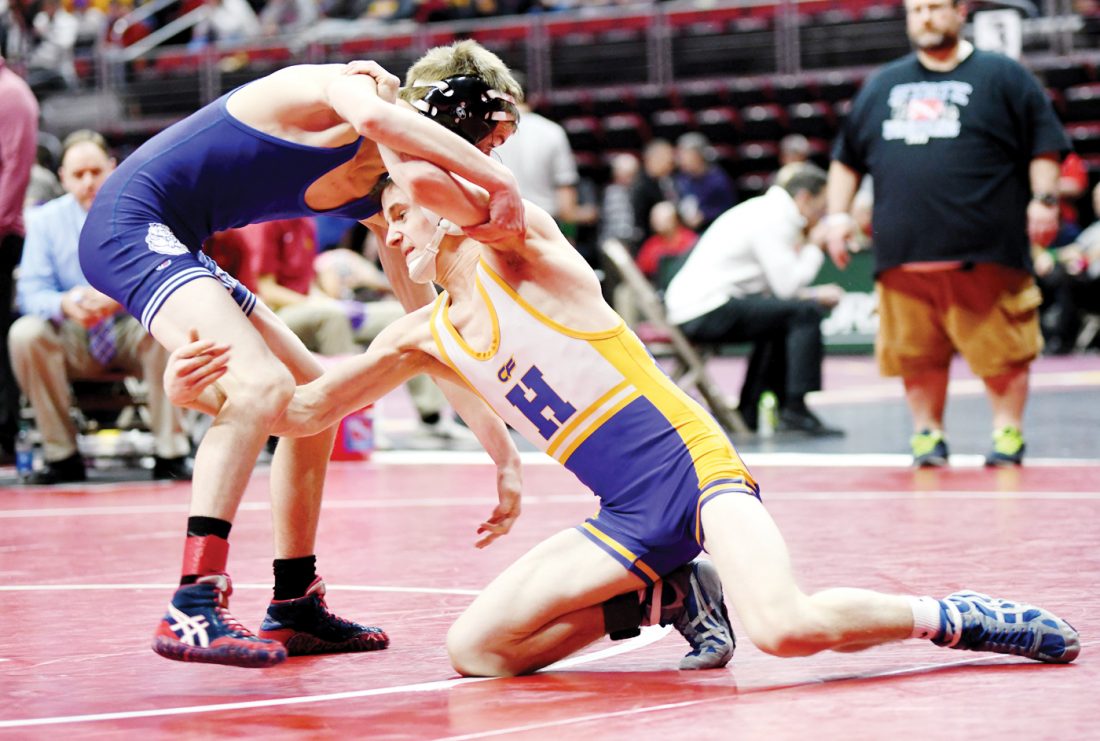 DES MOINES — Call it round eight or round nine if you want.

All Cam Phetxoumphone cares is that it’s the state quarterfinals.

Phetxoumphone, the top-seed at 106 pounds in Class 2A, dominated Carson Less from West Delaware here Thursday to advance in his bracket.

Awaiting the Webster City sophomore will be rival Cole Nelson of Humboldt, who moved on with a fall of his own.

The two have met eight times officially since entering high school, with Phetxoumphone winning the last seven after Nelson claimed the first matchup.

Phetxoumphone was the first wrestler to finish his match, completing the task in 42 seconds. He took Less down in nine seconds and scored a pair of near-fall points before ending it.

“I wish I would have scored a few more points, but I didn’t know anything about him,” Phetxoumphone said. “I didn’t want to take any chances.”

Webster City will also have 145-pounder Nick Gasca competing on the consolation side after the junior went 1-1. Following a loss to Winterset’s Jack West in the first round, he rebounded by pinning Parker Terronez of Davenport Assumption in 1:17.

Nelson is one of three Humboldt wrestlers searching for state medals.

The Wildcat senior improved to 32-6 when he pinned Nathaniel Bigalk of Crestwood in the second period. Nelson earned two takedowns in the first minute, added another later in the first and picked up a pair of two-point near-falls before ending the match in 3:04.

Jase Goodell and Colton Goodell both lost their first round bouts, but bounced back with consolation wins to remain alive.

At 113 pounds, Jase Goodell pinned Zachary Klahsen of AP-GC in 1:05 after falling to Jesup’s Carter Littlefield. The freshman is 27-12.

Colton Goodell lost to Seth Adrian of Davenport Assumption at 220 pounds before staying alive with a 21-7 major decision over Harlan’s Jesse Schwery. The junior is 33-8 this season.

Greene County’s McKinley Robbins pushed toward a rematch of his own with Phetxoumphone after besting Carter Anderson of Albia, 7-2. Robbins, a freshman, suffered just one loss this year in 36 bouts, with it coming at the hands of Phetxoumphone.

Brenner Gallagher remained alive at 113 for the Rams, bouncing back from a loss to defending state champion Carter Fousek of Crestwood with a 12-6 win over Osvaldo Ocampo from Sheldon-South O’Brien.

The 2A quarterfinals take place at 9 a.m., with second round consolations to follow. The semifinals are scheduled to begin at 7:30 p.m.