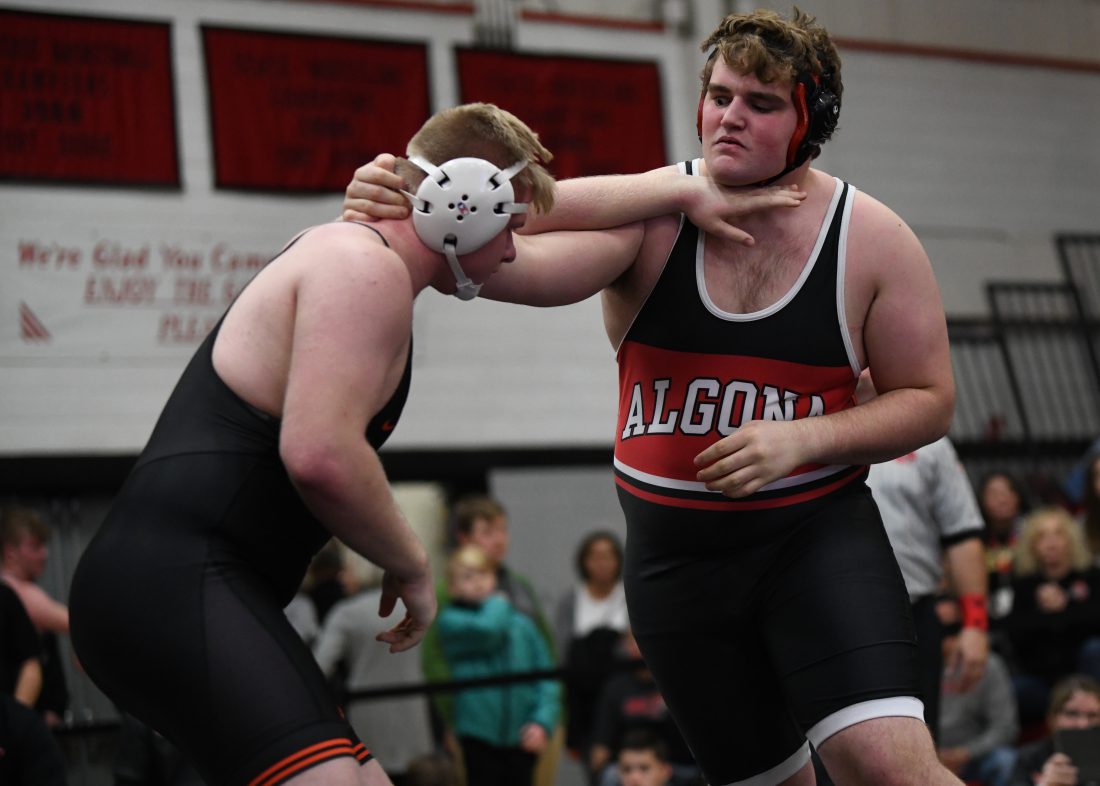 DES MOINES — In most wrestling rooms, a special bond is quickly formed by those comprising roster spots in the bigger weight classes.

At Algona, that is no different.

Cole Lewis, Andrew Hamilton and Gavin Meints all secured spots in the Class 2A state tournament, which kicks off Thursday afternoon inside Wells Fargo Arena at 1:30 p.m.

The trio were key pieces to the successful run in the fall for the Bulldog football program, as they reached the state semifinals.

Meints, a heavyweight, takes on sixth-ranked Cale Roller of Atlantic in the first round. The senior is 31-8 overall and enters after placing second at districts.

“Every single day I get to wrestle (Lewis and Hamilton),” Meints said. “And the way we push each other just makes us all better. They might be smaller than me, but they are tough as nails and don’t stop battling.”

That has also helped drive both Lewis and Hamilton. Lewis, a 33-8 senior, takes on No. 10 Gilbert’s Jacob Steenhoeck, while Hamilton, 37-1 and also a senior, gets Central Lyon/George-LR’s Josh Riibe first.

“Gavin and Cole really have built me up this year,” Hamilton said. “I started off not knowing anything, but we all are close and they helped me get where I am today. It really does help to have such good wrestlers with you every day.”

Lewis led the Algona football team in tackles with 76.5 on the field with seven sacks and 11 total stops for loss. Hamilton had 40 tackles, six sacks and 12 stops for loss, while Meints recorded 39 tackles, four sacks and nine tackles behind the line of scrimmage.

“I started the season a little late like the rest of the football players,” Hamilton said. “We are all really close because we are lineman and have spent a lot of time together. We just want the best for each other so it’s always a competition and a grind to do that.”

Hamilton, who is ranked fourth, made a name for himself at the Cliff Keen Invitational when he finished second. His lone loss came to Bennett Tabor, who has signed with the University of Minnesota to continue his career.

His strong run continued with a championship performance at the North Central Conference Tournament followed by wins at sectionals and districts.

“I never expected to be this successful and my goals have completely changed from what I had wanted at day one to what I want to accomplish now,” Hamilton said. “After the Independence meet, I was feeling pretty excited. That’s when I realized that I could be getting to state, which boosted my confidence.”

Lewis, also a champion at the NCC, won sectionals and districts. He earned a pair of close decisions at districts over wrestlers with a combined 63 victories.

“I started wrestling my freshman year and didn’t have a varsity spot until junior year,” Lewis said. “This is by far the best moment I’ve had in my wrestling career. I’m definitely looking to place down at state.

“I’m not satisfied yet. I would love to come home with a medal.”

Meints also came out of a loaded bracket at districts, as the Top-3 finishers each had over 30 wins. A key win in his semifinal match there allowed for him to secure the runner-up spot and bid to state.

“I’ve been wrestling since my middle school days and this is the best wrestling memory I have had,” Meints said. “I’ve always dreamt of making it to the state tournament.”