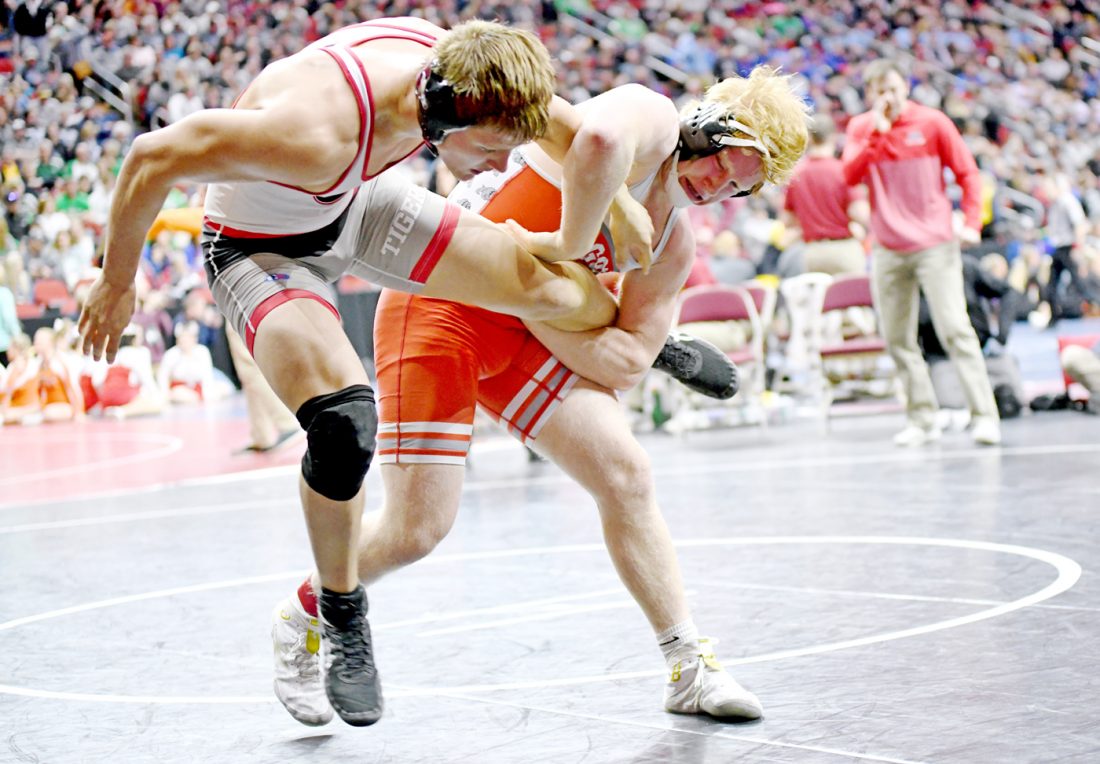 Messenger photo by Britt Kudla Cole Lewis of Algona takes on Gilbert's Jacob Steenhoek at the state tournament on Thursday in Des Moines.

With all three competing for the first time on the big stage of state, it was a wise move.

Lewis and Andrew Hamilton each advanced to the Class 2A quarterfinals with decision wins, keeping their dreams of medals alive. Gavin Meints, however, suffered a pair of losses, ending his tourney run.

For Lewis, the 195-pounder used a pair of third period takedowns to take care of Gilbert’s Jacob Steenhoek, 6-4.

“The atmosphere was amazing,” said Lewis, who was part of the Algona football team that competed inside the UNI-Dome in the state semifinals. “It’s very loud and overwhelming, but we got here early and I was able to take it all in.

“It definitely helped me stay calm and focus on the game plan. I felt relaxed and it just seemed like a normal match once it got started.”

Lewis, a two-time all-state football player who is headed to Grand View University in the fall, quickly escaped twice in the second to equalize a takedown from Steenhoek, the eight-seed in the field.

After allowing Steenhoek out to start the third, Lewis quickly brought him to the mat. After another escape, he put him on his back once more to seal the victory.

“It was a great feeling getting my arm raised,” Lewis said. “But seeing the faces of all my friends and family members after was an even better feeling. It feels good to make them proud.”

Lewis (34-8) will now meet No. 1 Wyatt Voelker (35-1), a sophomore from West Delaware, in the quarterfinals. Voelker advanced with a 3-1 decision over Creston’s Sam Chapman.

Hamilton scored a first period takedown against Josh Riibe of Central Lyon/George-Little Rock at 220 pounds, adding a pair of escapes in the second to survive, 4-3.

Also an all-state football player in the fall for the Bulldogs, Hamilton earned the six-seed. The senior, now 38-1 on the year, will face Crew Howard (36-0) from Clarinda in the quarters after he advanced with a fall vs. Tino Tamayo of Charles City.

Meints, another all-state football selection, was knocked out after a loss to Cale Roller of Atlantic in the first round by pin. In his consolation match, the senior fell to Nicholas Wood from Charles City, 10-4, ending his year 31-10.

Just like Algona, Emmetsburg had two wrestlers survive the first day, with one on the championship side and one in the consolation rounds.

Mason Griffin, the No. 2 seed at 170 pounds, scored a fall vs. Porter Smith of Bondurant-Farrar in the second period. After recording a takedown in the first, Griffin turned a reversal into a pin to end the match.

The E-Hawk senior, who placed sixth last year at state and is a reigning Twin Lakes Conference champion, improved to 22-3. He will face Solon’s Jax Flynn (46-7), an 8-3 winner over North Fayette Valley’s Kale Rodgers.

Bret Hoyman rebounded from a 14-7 loss to Iowa Falls-Alden’s Riley Burke in the first round with a 6-3 decision over Bryce Cole from Van Meter/Earlham to stay alive.

At 182 pounds, Matthew Wirtz dropped a pair of decisions, ending his sophomore season with a record of 32-14.

The 2A quarterfinals hit the mat at 9 a.m. following 3A bouts with second round consolations to follow. The semifinals begin at 7:30 p.m.