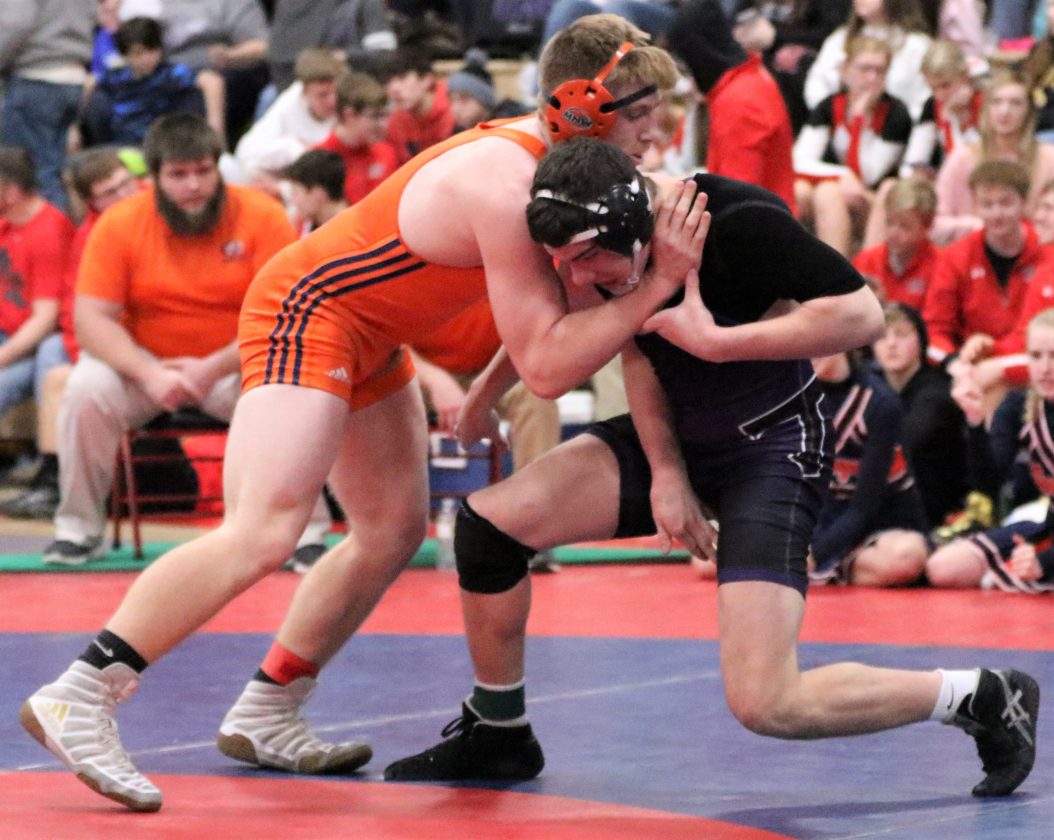 It was the third career title for Collins (126) and the first for Schuttler (195) as the Cougars finished as runners up in the league race with 186 points.

Collins rolled through the field, pinning all three of opponents in the first and two in the first 20 seconds. Collins (23-4) had a fall in 20 seconds and 15 seconds and then pinned Emmetsburg’s Kelly Griffin in 1:56 to claim the title.

“Winning the third title felt great after what happened last year in getting second,” Collins said. “This year has started off pretty great and I’m just looking to improve on the basics.

“I feel like the conference tournament gears us up for the state tournament with all the talent we have in the room.”

Schuttler (28-0) suffered a torn ACL last season and fought back to earn all-district honors on the gridiron and has put together a 28-0 campaign in his senior year.

“It means a lot to me because of how much work I have put in through the years and after tearing my ACL last season in football, it’s that much better,” Schuttler said. “I have excellent workout partners that always push me during practice and make me better every day.

“I have came a long way over the years and I can’t wait to see what the rest of the year has in store for me and my team.”

Schuttler, who is ranked 10th, defeated Alta-Aurelia’s Alex DeRoss, 10-6 for his title. Schuttler had a tight 8-7 decision in the semifinals and a fall in the quarterfinals.

“I wrestled amazing competition,” Schuttler said. “I always need to get pushed like I did, because it will only make me better for the postseason.”

South Central Calhoun’s Blake McAlister (29-1), who is ranked seventh at 152 pounds, pulled off the upset in the 160 pound championship, edging Graettinger-Terril’s fourth-ranked Spencer Roth 9-8. McAlister had two falls leading up to the finals match.

“Winning the TLC title was the goal all year. I came up short last year in the finals, so being able to take home first this year was nice,” McAlister said. “Having a kid like Roth in the finals that’s ranked in the top-four and being able to run with him and beat him definitely puts a little fuel in the fire for me at practice knowing that anything can happen on any given day, especially during the postseason.

“The main goal at the end of the season is to bring home some hardware, so that’s what we’re working for right now.”

Ayden Toms (28-0) remained unbeaten on the season and picked up his 100th career victory with a 15-4 major decision over Manson Northwest Webster’s Nathan Thoma. He had two falls and a decision before the title match.

Jordan Khommanyvong (21-2) made quick work of his opponents on his way to the 138 pound crown. Khommanyvong pinned Manson Northwest Webster’s Ian Kohnen in 40 seconds. He had first period falls in the quarterfinals and semifinals.

“Winning the TLC championship means a lot. It feels great to see what all your hard work goes into,” Khommanyvong said. “This all excites and motivates me more and more for the rest of the season.

“The team is a big part for me. Having a team that pushes you and holds you to a higher standard then your competitors really helps.”

Senior Brian King (24-4) went over 100 wins on the season recently as well, won the 220 pound championship with a 10-3 decision over Carson Peterson of Manson Northwest Webster. He had a fall in the quarterfinals and a tech fall in the semis.

Sophomore Kevin King (26-3) was the 113 pound king. He had a 5-1 decision over Southeast Valley’s Caelan Oakes. He had two first period falls leading up to his title match.

Mason Griffin (13-0) won the 170 pound championship with a 9-6 decision over Connor Fehr of West Bend-Mallard. Griffin had a fall and a decision in his first two matches.

Dane Johnson (28-4) was the lone champion for Pocahontas Area. Johnson claimed the 285 pound crown with a fall in 5:46 over Anderson of Emmetsburg. Johnson had falls in both of his other matches.

Eighth-ranked Tyce Ruffridge (26-8) suffered a 7-1 loss to West Bend-Mallard’s Donavon Hanson in the 106 pound final. Ruffridge had a 20 second fall in the quarterfinals and a 6-0 decision in the semifinals. Brandon Lenz (126) was third for the Indians.

Connor Fehr (170) earned a runner-up showing, losing to Griffin in the finals. He had a 59 second fall in the semifinals and 4:43 in the quarterfinals. Finishing third was Nolan Blair (138) and Creytan Grimm (160).

East Sac County’s Nate Thomsen was the lone champion for the Raiders. Thomsen (28-2) beat Brennan in the 132 pound final. He picked up a fall over Daniel Thomas of Manson Northwest Webster in 4:41.

Along with Mack’s runner up showing, Sterling Rodman (170) and Kipp Corbin (285) were both third.