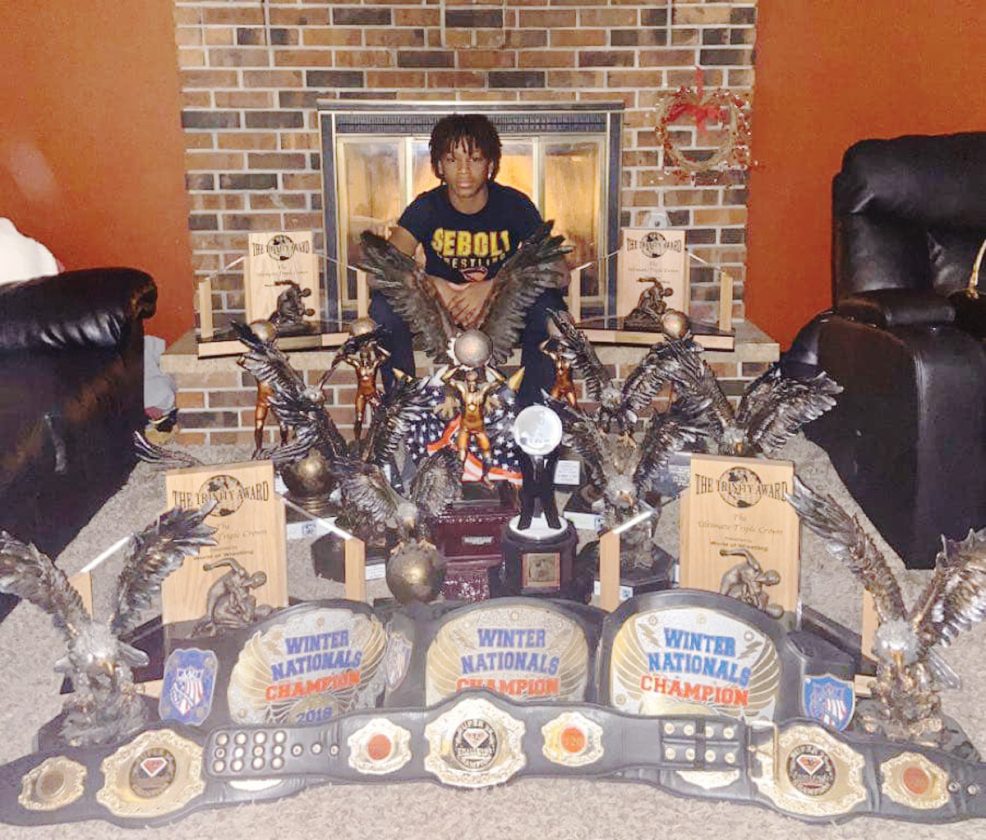 —Submitted photo DRESHAUN ROSS of Fort Dodge, 12, sits at home with a slew of his championship wrestling trophies.

The championship trophies are everywhere — enough to potentially leave Fort Dodge’s Dreshaun Ross satisfied for a lifetime, despite being only 12 years old.

They come in different shapes and sizes from all over the country. Five from the Tulsa Kickoff Classic. Four from Reno Worlds. Five from Tulsa Nationals. Six from Winter Nationals. Three from the Super 32 Challenge.

Judging by his skill, athleticism, size and sheer accomplishments, Ross — a chiseled 130-pound sixth-grader at Fort Dodge Middle School — appears to be a wrestling prodigy. And that very well may be the case.

Ross isn’t a machine, though. He’s not perfect. And those occasional reminders help him to succeed and improve in ways victory simply cannot.

“I always need to work harder,” said Ross, who captured another Tulsa Nationals crown this past weekend. “I know there are people out there who are going to be better than me. That’s all the motivation I need.

“I want to be the best. And the losses make me hungrier.”

Ross doesn’t deal with defeat much, but he tasted it this past fall at the Tulsa Kickoff Classic. In the 120-pound finals, Ross suffered a rare setback at the hands of California’s Jacob Perez.

The loss ended Ross’s run of four consecutive coveted Trinity Awards, given annually to winners at the Kickoff Classic, Tulsa Nationals, and the Reno World Championships. He had secured gold in all three during the 2015-16, ’16-17, ’17-18 and ’18-19 seasons.

Ross rebounded in a big way for his return trip to Tulsa last weekend, reeling off five consecutive victories as a Sebolt Wrestling Academy representative to take the 32-man bracket at 130 pounds. He also grabbed gold at AAU Winter Nationals earlier this month — one of his 17 titles in the last calendar year alone.

Wrestling isn’t Ross’s only passion. He still enjoys playing football — “you have to be aggressive and physical, and I like that,” he said — and is driven to succeed in the classroom as well.

“I work hard and try to get as many ‘As’ as I can,” said Ross, who added his favorite subjects are language arts and science. “I take the (same approach) and competitiveness to school as I do (with wrestling and football).”

Ross, the 2018 national wrestler of the year and most outstanding wrestler at the Tulsa Kickoff and Reno Worlds during prior seasons, will be at the USA kids state tournament in Cedar Rapids this weekend. It’s going to be another busy stretch for the family; his sister, Alexis, is entered in the girls state meet in Waverly on Friday and Saturday as a Fort Dodge Senior High freshman.

“All of my siblings are my biggest (supporters),” Ross said, referring to older brother Drevon — a multi-time Dodger state medalist — as well as Alexis, Alaysha and Damarion. “My mom (Amy) and dad (Andre, a former Iowa Central wrestler) are always there for me, too.”

Ross knows his tournaments are serious business, but he also keeps it all in perspective — especially given there is so much more of his journey still to come.

“I like to have fun,” Ross said. “That’s important. I’m always going to give it my all, but (competing) has to be more than just work. And my parents, siblings and coaches at Sebolt (have taught) me it’s not just about being (elite) on the mat or in the (wrestling) room. You have to take school seriously, and be a good person, too.”