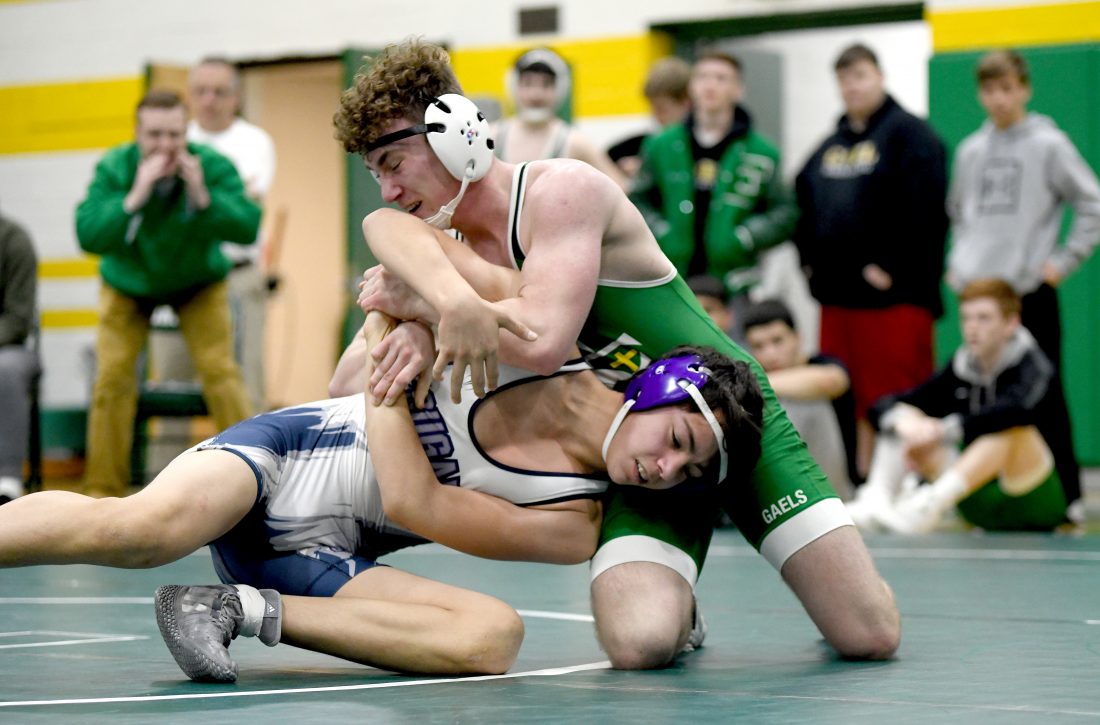 Elly Berry has won four matches this season, but her fifth victory may be the most important one to her.

Berry, the 126-pounder for St. Edmond, defeated a male competitor for the first time in her career, knocking off West Hancock’s Andrew Barber 7-4 at the St. Edmond Duals.

“Getting a win against that boy made me feel really confident and is making me feel more prepared for girls state,” Berry said. “I am super excited that I could win against a boy in front of my home crowd and have all that support.

“It gives me a lot of confidence for upcoming tournaments and more importantly girls state.”

The Gael sophomore has finished second twice this season in girls tournaments, and is hoping this will be a confidence booster with the girls state tournament only a week away.

“That was a huge win for Elly,” said St. Edmond head coach Eugene Carlson. “Next week she’ll have a tournament in Jefferson and then girls state.

“It was the first boy she beat, so she is pretty excited to keep the momentum going.”

Clay Kelley (132) had a strong day for the Gaels and was named team MVP after earning two falls. He picked up a fall in 2:32 over Fort Dodge JV’s Alexis Ross and 31 seconds over Southeast Valley’s Ty Klat.

“Clay got two big wins for us,” Carlson said. “Clay just needs to stay in the right mindset and do the little things right.”

Tyler Rossmanith picked up two victories for the Gaels as well. Rossmanith had a fall over AGWSR’s Ben Puente (3:04) and Roland-Story’s Sam Charlson (1:18).

Duckett suffered a dislocated knee cap an LCL strain against Roland-Story in a triangular on Thursday.

“Ryan was a true competitor when he got hurt. There was about 40 seconds left in the match and he fought through it and kept going,” Carlson said. “Ryan was a good coach for us (on Saturday).

“He will be out for about three weeks, and could be eligible to come back for the South Central Calhoun Duals (Feb. 1) to use that for a tune up right before sectionals.”

The Gaels will be back in action on Thursday in a North Central Conference triangular at Humboldt against the Wildcats and Webster City.