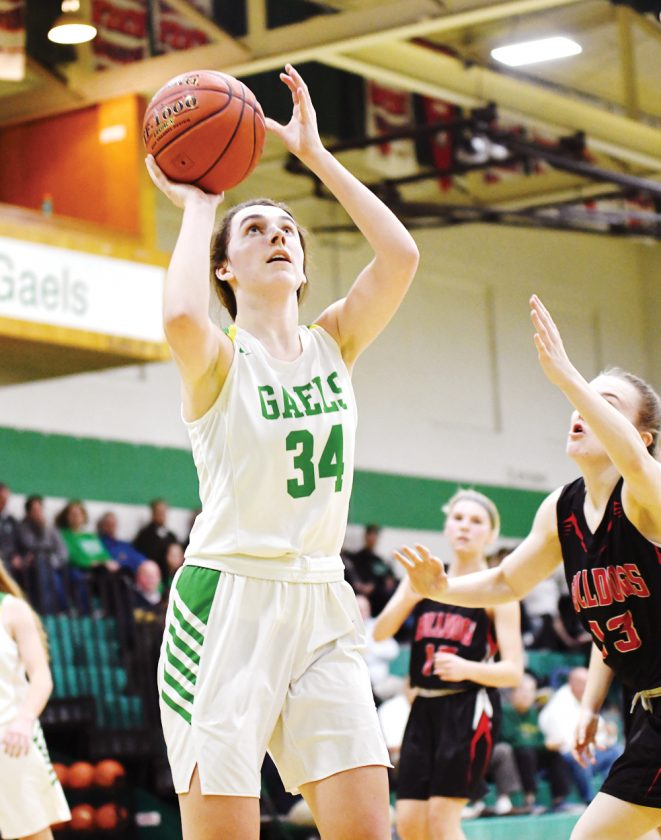 Messenger photo by Britt Kudla Leah Neverman of St. Edmond puts up a shot against Hampton-Dumont on Friday evening in the Gael gym. For more photos, please visit CU.messengernews.net

HAMPTON — Steve Neuberger liked the way his St. Edmond girls started against 11th-ranked Hampton-Dumont/CAL, but not so much the finish.

For the first 10 to 12 minutes of the ball game, the Gaels hung with the Bulldogs, but then H-D was able to stretch the Gaels the rest of the contest.

“For the first 10 to 12 minutes, was as good as we’ve played all year,” Neuberger said. “It was refreshing to see that we showed glimpses of playing well with one of the best teams in the conference.”

The Bulldogs took an 18-13 lead after the first period, then outscored the Gaels 27-6 in the second period and 52-15 in the second and third quarters.

“We got into foul trouble and they started hitting shots,” Neuberger said. “It really snow-balled in a hurry and they pulled away in the second quarter.

Leah Neverman led the Gaels with nine points, while Gracie Harvey and Cambrie McBride had eight and seven respectively.

The Gaels are back in action on Thursday at South Hamilton before hosting Webster City Friday.