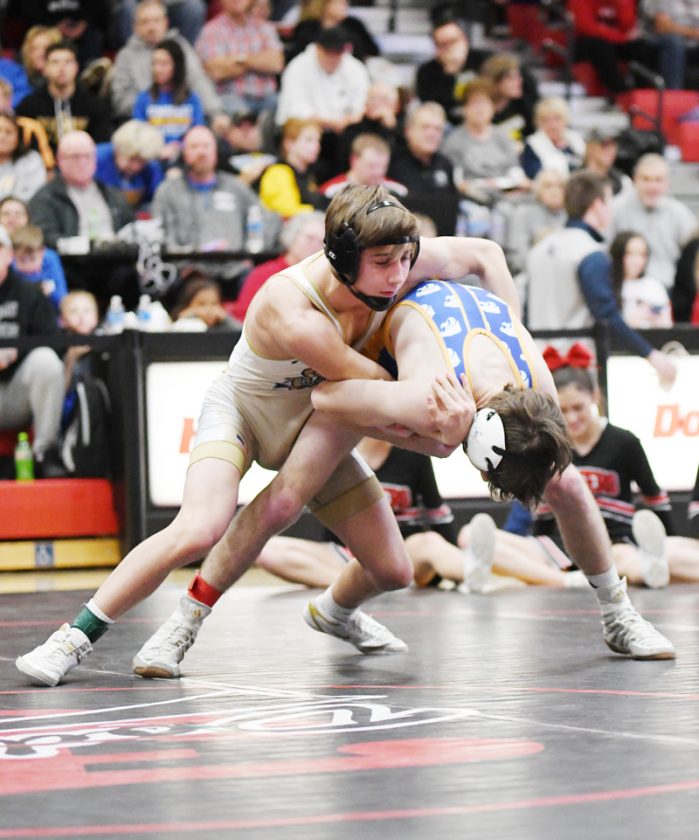 Messenger photo by Britt Kudla Drake Ayala of Fort Dodge went 4-0 on Saturday to stay unbeaten on the year at 120 pounds.

OAK PARK, Ill. — Fort Dodge knew it was in for an uphill climb at Saturday’s “Beat The Streets Brawl.”

The third-ranked (Class 3A) Dodgers dropped all four of their duals, including their first three to national Top-15 squads. It was Fort Dodge’s final setback — a 35-31 decision against host Oak Park River Forest — that left head coach Bobby Thompson feeling frustrated at the end of the day, though.

“I don’t think we should have lost that one,” Thompson said. “We were a little overwhelmed in our other matches, but the (OPRF) dual was there for the taking.

“We lost a couple of matches that we shouldn’t have, because frankly, we got out-worked and out-wrestled. But when you’re facing elite competition like this, all of your bad habits or bad technique will get exposed. This was definitely a learning experience for us.”

Fort Dodge’s Drake Ayala, a top-ranked 120-pounder who is one of the most highly-sought after wrestlers in the nation from the Class of 2021, did his part with four victories in improving to 28-0 on the year. Ayala had two pins and two major decisions.

No. 2 Carson Taylor was also impressive again at 126, going 3-1 overall with two falls and a decision victory. Taylor (25-2) suffered a 6-2 loss to Jake Rundell, who is ranked in the Top-10 nationally and a Purdue University recruit.

“Drake and Carson looked great,” Thompson said. “Drake just dominated, even against kids who have been state champions. And Carson was right there with Rundell, who is a high-end Div. I guy. It was a tight match. He proved he belonged.

“They’re both performing at the level you’d expect from champions as we get closer to late January.”

“Dreyzon really battled,” Thompson said. “It’s OK if you get beat, as long as you give it your all. Dreyzon did that against some Div. I level opponents.

“Both the Cowells (Lane and Brooks, who went 1-3) fought hard and got beat by some tough guys. They looked good and got better.

The Dodgers are 43rd nationally.

“I have to say this: you look at the week Kody Cook just had (at 152),” Thompson said. “He loses to a ranked Waukee kid on Thursday, then takes on four high-end guys here and goes 0-4. But he wrestled his butt off. That’s what I want to see. Sure, his record took a hit, but this should make him better in the long run. Same goes for a lot of our wrestlers.

“This was a whole new level of competition. It definitely would’ve helped to have Levi (Egli, the Dodgers’ second-ranked 195-pounder who is sidelined for four weeks with a broken bone in his hand), but we had some strong individual performances and now we’ll get back to the CIML tougher and wiser. And we have film to study where we made our mistakes and what needs to be corrected.”

Fort Dodge returns to action on Thursday at Marshalltown.