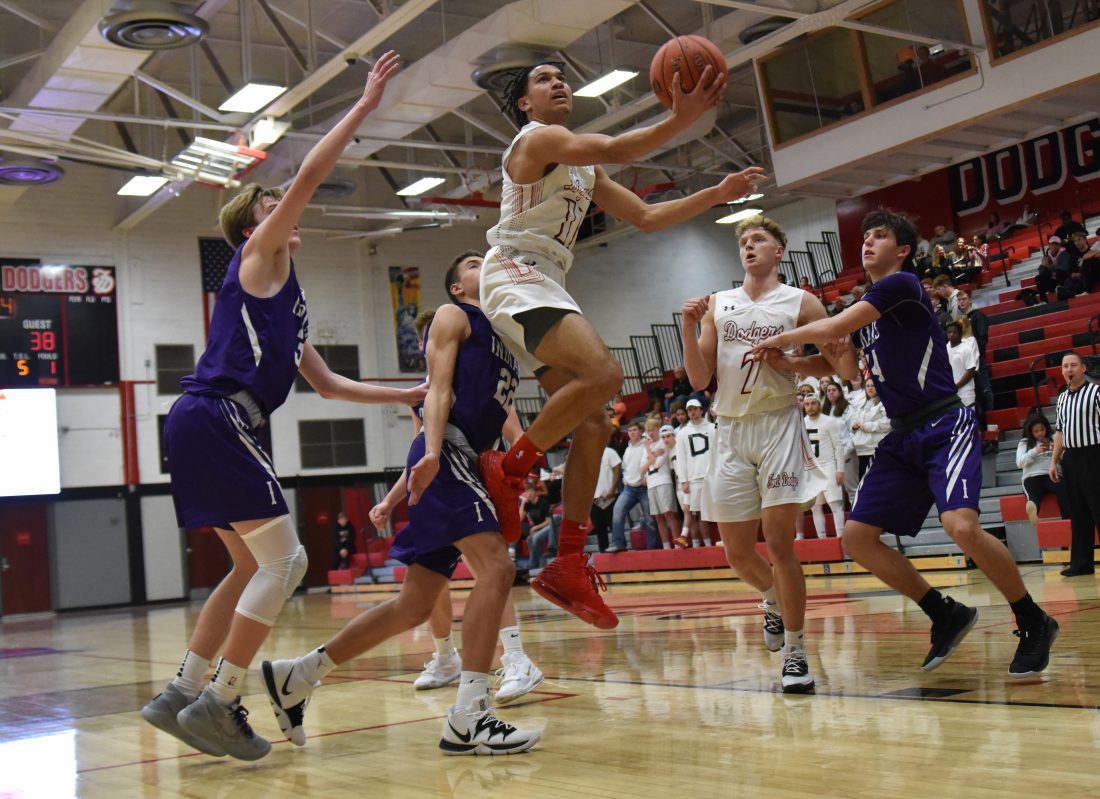 —Messenger photo by Britt Kudla Fort Dodge’s Tysen Kershaw drives to the basket against Indianola as Asle Thorson (2) looks on in the Dodger gym. For more photos, visit CU at messengernews.net

Some basketball teams go an entire season without ever finding their true identity.

Despite returning very little varsity experience, this group of Fort Dodge boys seem to have discovered one almost immediately during Monday’s season debut.

With a gritty performance that even had their head coach cracking a wry smile afterward, the Dodgers flashed some good, old-fashioned toughness and resilience to outlast Indianola 61-59 in the opener for both programs inside the FDSH gym.

Senior Tysen Kershaw scored 25 points for the Dodgers, who used a late 7-0 burst to pull ahead and ultimately prevail. But it was the little things from Fort Dodge’s role players — Tom Daniel went 11 deep and got different contributions from almost everyone relatively to their own skill set — that made the whole greater than the sum of its parts on a night where a blank canvas started to take a little shape.

“This team showed some physical and mental toughness that, I’ll be honest, none of us really knew about — myself included to a certain extent,” Daniel said. “It’s so hard to gauge what we were going to get, given how many moving pieces and unknown variables we’re dealing with. Sometimes, it just takes that first varsity game that counts to see how guys respond as a team. It’s only one of 21, but I give our kids a ton of credit for taking our message and running with it.

“We might have to use quite a few players. And on certain nights, those needs will change. A lot of basketball is about stepping up and making the most of your minutes in the role you can fill. It’s not all about shots and points. There’s so much more to the game than that. If we can continue to buy into that concept collectively, we could be a fun group to watch grow — as unorthodox as it may look sometimes.”

As expected, Kershaw was the catalyst. The three-year regular had all eight of the Dodgers’ points during the last half of the fourth quarter, including an energizing steal, layup and traditional three-point play that put Fort Dodge up for good with 46 seconds left at 59-57.

“That’s all secondary. It only matters if we get the win, and even then, it has to happen within (the framework) of what we’re trying to do,” Kershaw said. “We lost a lot of leaders from last year’s (rotation), so it’s kind of up to me and the other seniors to do what we’re capable of. If that means I need to score, I’ll do it — but I’m also going to have to find the open man, or rebound, play defense, or whatever else is needed.

“If we’re going to use 10 or 11 or 12 guys, the trust has to be there. We have to take advantage of (the depth) instead of just randomly (using players). So we’re getting to the point where we’re figuring out who we are and what each of us can do. In the meantime, we can just keep fighting and competing. And I thought we did that. It’s not always about being the tallest or most talented — it’s sometimes about wanting it more and being tougher (than the opponent).”

Indianola, which was 16-5 a year ago but lost its two leading scorers to graduation, had moments into the third quarter where it looked close to gaining complete control. The Indians were up 9-4 and 13-8 early, 30-24 late in the second period, and 38-33 midway through the third.

Every time the Dodgers needed to avoid the knockout, though, they buckled down and punched their way back into it.

Senior reserves Nolan Daniel and Jaheim Clayton had buckets late in the first quarter to put FDSH back on top. Senior guard Trey Preston scored a field goal and a pair of free throws to close the first half and pull the Dodgers within 30-28. And it was Kershaw’s turn in the third period, as he had three consecutive baskets — followed by the same from Preston and junior Averey Martin — to turn a 38-33 deficit into a 43-38 advantage.

“We had guys contribute in ways they maybe never have before at this level, but when it was their turn, they did what we needed,” Daniel said. “Asle (Thorson), Tre, Jaheim and Nolan played the way seniors should. Monty (Monterius Abrams-Altman) hit some big shots (11 points, including three second-half three-pointers). Again, I think you could single out every guy for being solid and efficient with their minutes for the most part. Because if we’re going to be a little more open and full-court in our approach, we can’t have players trying to do too much or getting out of control.”

It was 46-40 Dodgers after the 13-2 burst to end the third, but the Indians responded with an 11-3 run of their own to go back on top. The squads traded blows the rest of the way until Kershaw took over at crunch time.

“We obviously need Tysen to be ‘the man,’ and he’s fully capable of that at this stage in his (career),” Daniel said. “He’ll have to run the point, he’ll have to rebound, he’ll have to be our top defender, and he’ll have to use his ability to get to the hoop like he does with his athleticism to make plays. It’s a lot, but we trust Tysen to do it all.

“That doesn’t diminish the value of everyone else, though, as we saw (on Monday).”

Kershaw even admitted he was “a little shocked” by how quickly Fort Dodge seemed to gel once the ball went up.

“But if we battle like that,” Kershaw said, “we can surprise some people. I’m proud of how we handled it for our first game. It’s a good first step.”

Fort Dodge is right back in action on Tuesday night at Des Moines Lincoln.