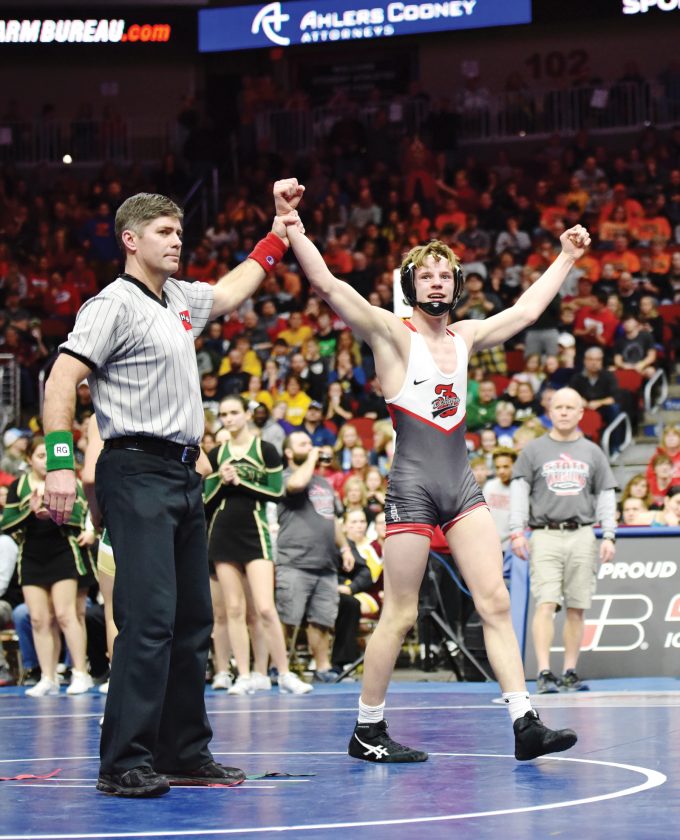 Every time the cards have been stacked against him, Fort Dodge senior Carson Taylor has used that as motivation to get to where he wanted to be.

As a freshman Taylor didn’t make the varsity lineup and that propelled him into a work ethic that eventually led to the top of the state podium.

After a fifth place finish at state as a sophomore, Taylor had a strong regular season run and entered the state tournament as the fifth seed. That was all Taylor needed to push even harder to earn state glory. Once inside Wells Fargo Arena he moved through the fourth, first and third seeds to claim the 120 pound state championship.

“Going into the state tournament being the fifth seed was a big motivator,” Taylor said. “I knew I was better than that and knew it was going to be a dog-fight, but I kept my mind right.

After returning to Fort Dodge Senior High as a state champion, Taylor wasn’t about to sit back, heading right to work, knowing what the feeling was like to have the championship medal placed around his neck.

“It was pretty cool when people would congratulate me after winning the state title,” Taylor said. “I want to do that again because that feeling was amazing.

“I’ve just been working hard and working out to keep pushing myself to get better and make a return to state.”

The currently second-ranked Class 3A 126 pounder, has decided to continue to wrestle in college and will keep his education, and wrestling careeer going at Grand View.

The Vikings are tied with Adams State and Central State for the most national team titles (eight) in NAIA history. Grand View has won eight-straight, which is the second-largest consecutive championship streak for any wrestling program at any level (Iowa won nine Division I crowns from 1978-86).

“They (Grand View) started talking to me early,” Taylor said. “I went on my visit and liked the campus and the coaches. I met with a couple of wrestlers and liked the environment. That was another big thing for me.

“I was also looking at Buena Vista and possibly walking on at Iowa State. But decided Grand View was a good fit and pretty close to home.”

With his future decided, Taylor is still focused on his remaining season as a Dodger, with a tight knit group that has built a special bond and is looking to bring home the school’s sixth straight top-three medal.

“I love being a Dodger with all the home grown wrestlers that have been working hard together since we were young,” Taylor said. “We are like brothers and are close together. Being a Dodger is being part of a family.

“I grew up with most of these guys and we feel comfortable around each other. It just feels natural to be a part of the Dodger team.”

Taylor is off to another hot-start, winning six straight matches, five by fall. This past weekend he claimed the Independence 126 pound championship. Taylor is 88-15 in his career.

The Dodger wrestling family isn’t just in the wrestling room, it extends into the community and with younger wrestlers waiting for their turn to wear the red and black, Taylor’s story is one to live by.

“I would tell the younger wrestlers to just keep working at it and never quit,” Taylor said. “You might not be the best right now, but you just have to keep working.

“You have to believe in yourself and put in a lot of work.”

People I would like to have dinner with: Avery Thompson, Austin Lee, Brooks Cowell.

It would surprise people that I: play video games.

I can’t go a day without: Cereal (Fruity Pebbles or Cap’n Crunch).

Superstition: when I’m downstairs and go upstairs, I turn the lights out and run up fast because I think something is chasing me.

What are you listening to right now? Eminem.