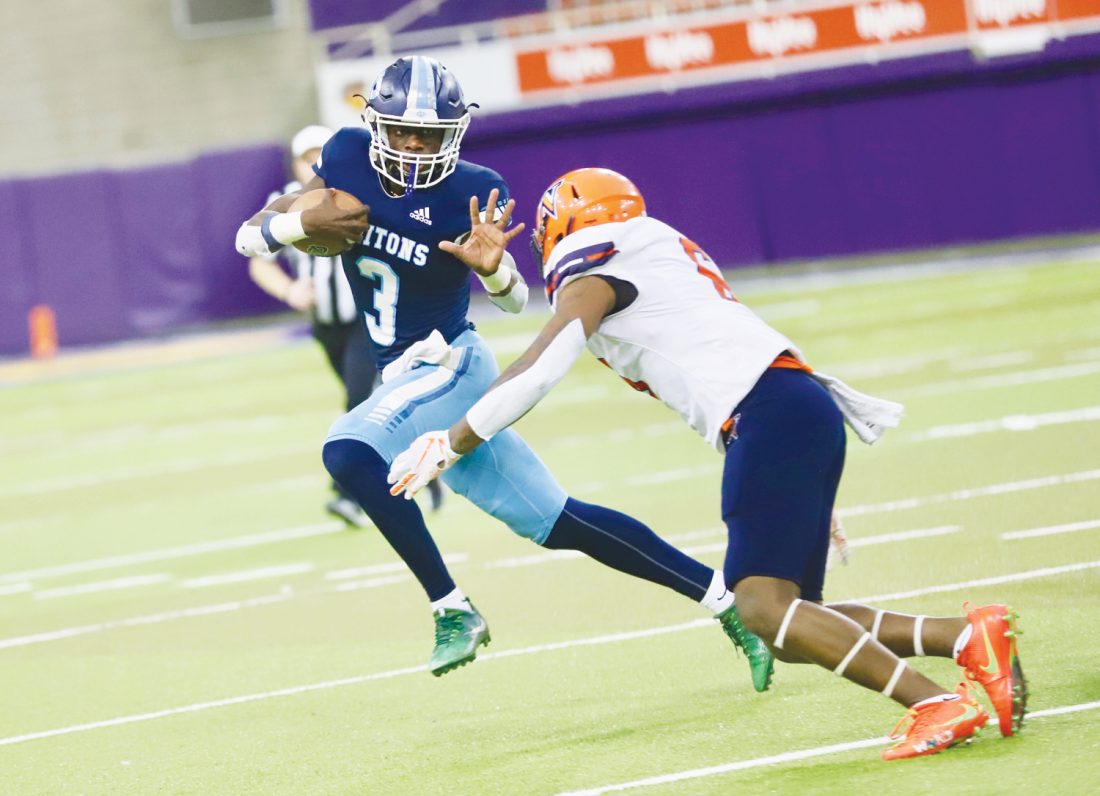 —Photo by Paul DeCoursey Iowa Central’s DJ Irons tries to avoid a tackle during the Graphic Edge Bowl in the UNI-Dome. The Tritons won 31-28 in overtime.

CEDAR FALLS — Colin Swygman gave himself plenty of time before Sunday’s Graphic Edge Bowl to get familiar with the UNI-Dome surroundings.

Swygman, Iowa Central’s freshman kicker, knocked through the game-winning field goal in overtime here as the Tritons claimed a 31-28 victory over No. 19 Nassau.

The victory set off a wild celebration as Iowa Central (7-6 overall) won for the second consecutive year here and the ninth time in a row overall.

“Warming up with Tristan Waugh and Chance Gibbons, everything was perfect and I knew we would have the best special teams performance,” Swygman said. “The kick felt good and it was really special making the game-winning kick here in a bowl game for Iowa Central.”

Coming into the game, Swygman was 8-for-13 on field goals this year, but had dealt with issues as the Tritons prepared for the Lions (7-4).

“It’s been a rough couple of weeks,” said Swygman, who was also a perfect 4-for-4 on extra points. “But I had to put this on for this team. Special teams can make the difference in games like this and all that extra time was worth it.”

“He’s been big for us all year and he was nails (Sunday),” Montalto said. “I’ve been on him hard the last couple of weeks, but he came through big. We trusted him to make the kick.”

The Triton defense came up big in overtime after allowing a touchdown by Nassau in the final seconds. Thanks to the play of game defensive MVP Daquan Cross, Marquis Burks and Nathan Proctor, Iowa Central forced a turnover on downs to get the ball back for the offense.

Both Burks and Proctor had two sacks each on the day.

“We talked (Saturday) night about the defense all needed to play for each other and make it happen,” Burks said. “These situations are nothing new to us. We just strapped up and anchored down.”

“It feels great to (win a bowl game) two times in a row.”

DJ Irons, who earned the offensive MVP award for the game, completed 17 of 30 passes for 315 yards and four total touchdowns. Irons, who missed the season finale due to a concussion, hit Terrell Carey for two scores and Tanarious Achan on another.

“We never gave up and I love our coaches for that,” Irons said. “We went through a rough part in the game, but they trusted us to come out on top. We fought for each other and said that we were the only ones who could beat us.

“I’ve just been blessed to do this. I have to give all praise to God, my family, teammates, coaches and Iowa Central for giving me this opportunity to play here.”

Jadon Washington ran for 59 yards, Irons added 43 and Grant Walker picked up 36 key runs late in the fourth and overtime to set up scoring drives.

Carey finished with 85 yards receiving, Christian Ford had five catches for 67 yards and Achan hauled in f our passes for 60.

“We’ve played so many close games this year and came out with a loss, it was good to come out ahead,” Montalto said. “DJ made some incredible plays just like he has all year. We asked our defense to step up when we needed to and they did.

“It was just really a great way to end the season, especially for these younger kids to see us win a game like this.”

Nassau, playing without starting quarterback Stephen Sanchez, relied on Nathaniel Serrette. Serrette threw for 213 yards with a touchdown. The Lions also had three rushing scores in their first game here since 2004 when they beat Ellsworth.