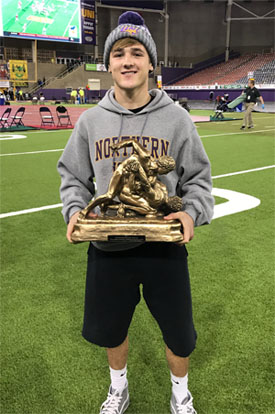 CEDAR FALLS — Slowly, but surely, Drew Bennett is starting to feel like his former self.

Competing at 133 pounds, Bennett scored a 3-2 decision over Iowa State’s Ramazan Attasauov in the finals.

Bennett opened his day with an 11-6 decision over Iowa State’s Charlie Klepps in the quarterfinals. He followed that up by scoring a 17-0 technical fall vs. Indiana’s Jonathan Moran.

In the finals, Bennett recorded a first period takedown and followed with an escape in the second for his points. Attasauov only scored on a first period escape and another in the third.

“I felt good every match,” Bennett said. “Finally getting back into the flow of things after my surgery. My first tournament back a few weeks ago compared to now, there’s a big difference in my conditioning, flow and everything else.”

A redshirt freshman, Bennett finished third at this meet last year and was also third at the Jim Koch, going 14-4. He won a state title for the Dodgers as a senior after placing third twice.

“My next thing is the Midlands so it was good getting in a few scraps (Saturday),” Bennett said. “I know I’m ready to make some noise at Midlands here in a few weeks.”

Bennett underwent hip surgery earlier this year to repair an impingement, bone spurs, a fracture, a broken piece of bone and a torn labrum.

Lara rebounded from a quarterfinal round loss to Indiana’s Graham Rooks, 9-1, to win two straight after a bye. He pinned Rooks’ teammate, Luke Baughman, in 3:20 and bested South Dakota State’s Peyton Smith for bronze, 14-5.

A two-time state champion for the Dodgers with two other state medals, Lara is in his redshirt sophomore season for UNI. He went 9-5 in 2017-18 while redshirting and was 12-8 a year ago, winning both the Last Chance Open and Duhawk Open.

Trenary, who captured a state title with the Cowboys, went 3-1 on the day. His lone loss in the round-robin division came to Missouri’s Jose Diaz, 7-5, in his first match.

Trenary earned a fall in 35 seconds over UNI’s Bryce Esmoil, pinned Indiana’s Rudy Streck in 5:59 and scored a pin vs. Chattanooga’s Logan Andrew in 2:44.

A freshman for the Jackrabbits, Trenary was a four-time state medalist, capping off his career by going 50-0 last winter. He also finished second and third at state, and was a runner-up at the 2019 Fargo Nationals.