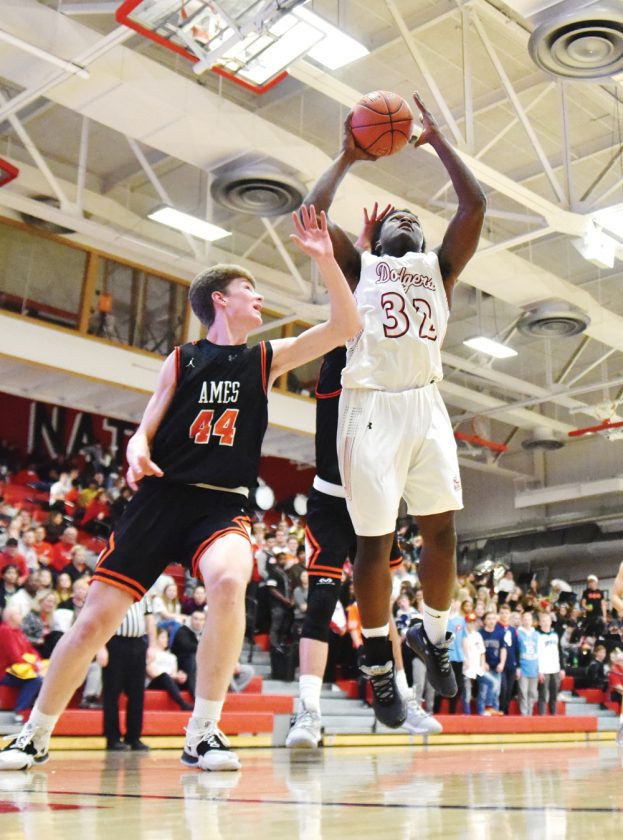 On the surface, it may look like the Fort Dodge boys lost their game against Ames in the final two minutes on Tuesday night.

Head coach Tom Daniel knows the Dodgers missed the opportunity to make victory a realistic possibility long before that.

The Little Cyclones scored the final eight points of the contest to complete their second-half comeback, prevailing 47-39 thanks in large part to the aggressive play of guard Keyshaun Brooks.

Brooks, a junior, worked off his early doughnut by tallying all 23 of his points after intermission. He sank 6 of his 10 shots from the floor, went 8-for-9 at the free-throw line, and even drained a trifecta of three-pointers for good measure as Ames (2-1 overall) put up 38 second-half points after registering only nine in the first half.

And that early stretch, Daniel maintained, was when his Dodgers (1-4) let things slip away.

“One of our main goals is to hold our opponent to single-digit (point) in a quarter. Well, we did it twice consecutively. Yet we were only up four at the break,” Daniel said of Fort Dodge’s tenuous 13-9 advantage. “You have to put a team away if you’re only giving up nine points in an entire half. For as much as we struggled defensively down the stretch at times, our offense just wasn’t what or where it needed to be start to finish.

“We made it a winnable game, but we didn’t (seize control) when it was there for the taking.”

The Dodgers went up 8-2 after the first three minutes, but managed only two field goals the rest of the half. Fort Dodge led 12-4 after an Asle Thorson basket early in the second quarter, then had just a single point in the final six minutes and 36 seconds of the period.

“We just don’t have a good grasp of what we’re trying to do right now on offense. Part of that is playing five games in eight days and not having a lot of time to practice or watch film, which we desperately need both of early in the season,” Daniel said. “But we have worked on some of this stuff. We’re not being patient with the ball, we’re not making smart, hard cuts, and our shot selection just isn’t what it needs to be. We also played really poorly in transition on both sides. Too many turnovers on our end, and not enough communication on the other.”

Sophomore Monterius Altman-Abrams had 13 points for the Dodgers, and junior Dayson Clayton added 10. The duo combined to swish six triples in 11 tries, but the rest of the squad went a combined 1-for-12 from deep.

Fort Dodge’s hopes were also crushed at the charity stripe. The Dodgers made only 4 of their 9 free-throw attempts, while Ames went 18-for-26.

“That’s a matter of personal accountability and concentration,” Daniel said of the foul-shot woes. “It’s been an issue all year so far, really, and it can’t happen. We’re not getting to the line a lot, but when we are, we have to do a better job of knocking them down.

“Dayson gave us great minutes overall, Monte hit some big shots, and Averey (Martin, who contributed eight points) did some positive things. But we’ve got to get better minutes out of everyone else — both more efficient and productive. It’s just disappointing, because we had an opening.”

Brooks began to assert himself by relentlessly taking the ball to the hoop after the break. He had 11 points in the third quarter and 12 more in the fourth, and his last points came on a trey to make it 37-32 Little Cyclones with 3:45 to go, capping a 13-5 Ames run to put the visitors up for the first time.

Fort Dodge did respond, as Clayton drilled consecutive three-point baskets and both Altman-Abrams and Kershaw sank buckets. A traditional three-point play by 6-foot-4, 240-pound sophomore center Corey Phillips put the Little Cyclones up for good with 2:01 remaining, though, and Ames never looked back.

Phillips had six of his 13 points in the last 121 seconds.

It doesn’t get any easier for the Dodgers, who visit Waukee (2-0) on Friday. The Warriors, who have eased their way into the season just as Fort Dodge found itself immediately in the deep end, knocked off Johnston last night, 68-61.