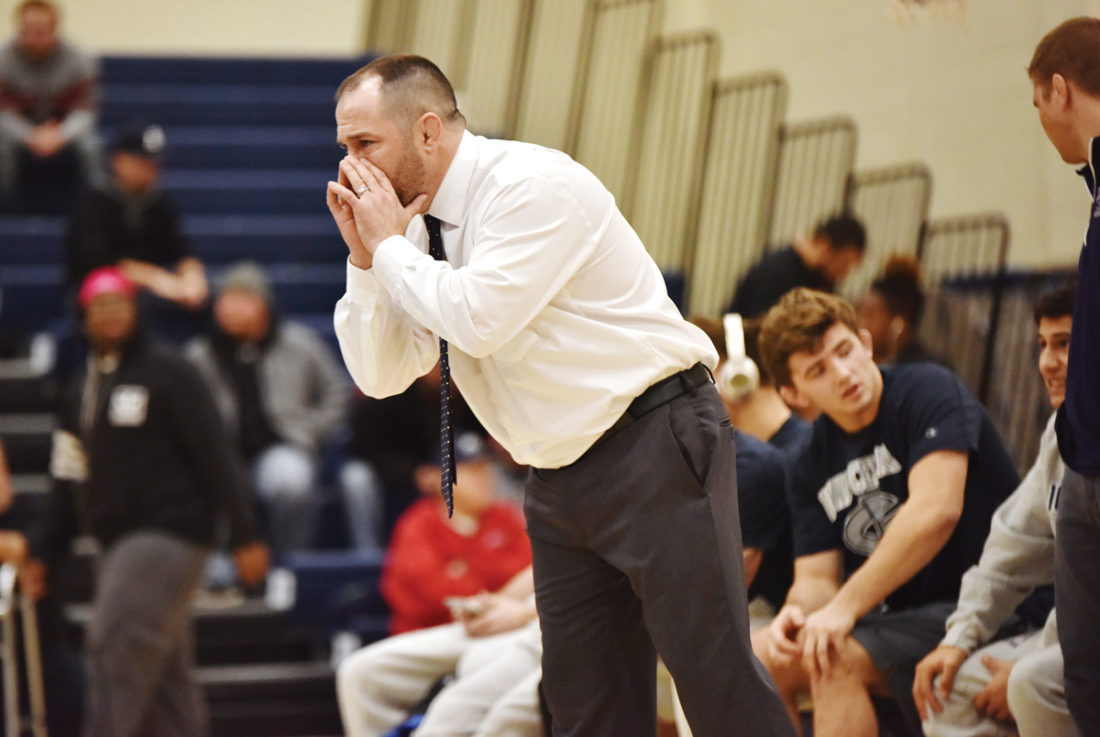 Iowa Central head coach Luke Moffitt finds himself in an unfamiliar spot with only one returning starter back from a team that finished third at the national wrestling tournament.

“We are a young team for a junior college,” Moffitt said. “We have a couple of leaders and some talent, but its pretty early, so we’ll see as the season progresses.”

Last year all 10 Tritons qualified for the national tournament, coming away with two championships and two runner up finishes. Eight wrestlers medaled for Iowa Central.

The good news for Moffitt: the lone returnee is sophomore Ashton Eyler, who finished second at 174 pounds.

“He is the leader of the pack,” Moffitt said. “He has a great attitude and expects to win. He takes it personal when guys aren’t doing the right thing, because he is a leader.

“He doesn’t want to win just for himself, he wants the entire team to win.”

Eyler, who is ranked preseason No. 1 at 174, won 15 matches last season after fighting through injuries in the first part of the season.

The eighth-ranked Tritons have already competed in three meets, wrestling at the Yellow Jacket Open in Minnesota, Iowa State Open, Grandview Open. They earned a victory over Iowa Lakes in their lone dual of the season.

Iowa Central enters the season with four wrestlers in the preseason rankings, including Eyler. Anthony Johnson (184) is No. 6, Boone McDermott (HWT) is eighth and Bobby Tellez (133) is eighth.

“Anthony has looked good early on and has the potential to be in the mix at nationals,” Moffitt said. “Boone is fun to watch. He pretty much walked through the Yellow Jacket Open, lost at ISU Open and won at the dual and the Grand View Open.”

Also competing for the spot at 133 will be Maddie Roney. Wrestling at 125 pounds will be sophomore Daniel Vargas and Jackson Roney, who is fighting through an injury.

The Tritons are looking for some guys to step up and fill the spots at 141 and 149 pounds. Fort Dodge four-time medalist Drevon Ross looks to be in the mix.

“We are looking for Drevon to step in and compete for a spot,” Moffitt said.

Freshman Andrew Gamble, who won the Grand View Open, is the front runner at 157 pounds.

Clarion-Goldfield graduate Reymundo Vasquez is the leader of the pack at 165 pounds.

“Reymundo has done good and picked up a big win at the Iowa Lakes dual,” Moffitt said. “He wrestled four years under Kurt Morgan (at Clarion), and is a hardworker, who will compete each time out.”

“He impressed me a lot over the weekend (at Grand View),” Moffitt said. “He is starting to figure out how to use his style to win matches.”

Just a couple of weeks into the season, Moffitt likes the fact that his younger wrestlers had a chance to learn on the go in the Open tournaments.

“These open tournaments are glorified practices and I want them to go out and compete in close matches and make some mistakes,” Moffitt said. “Then they know how to get better and it’s a place to gain confidence. They’re wrestling against Div. I, II and III wrestlers and all of the sudden they’re competing with them.

“There is a lot of good things about the open tournaments.”

Moffitt expects to see some growing pains, but it doesn’t concern him early on, it’s where they will be come March.

“We have our calendar circled for the national tournament,” Moffitt said. “We have to learn to be humble and put our egos aside and figure out what we need to do to get better and go work on it.”

The ICCAC will be stacked once again with second-ranked NIACC, fifth-ranked Ellsworth and the Tritons. Iowa Central will see both ranked squads early, as they will compete against the Trojans in their home opener tonight. They will face the Panthers on Dec. 4.

“Ellsworth is a tough team,” Moffitt said. “NIACC returns seven starters and has a ton of tough guys. We need our new guys to step up and beat those guys.”

Moffitt will be assisted by Troy Bennett and Kolton Kersten.