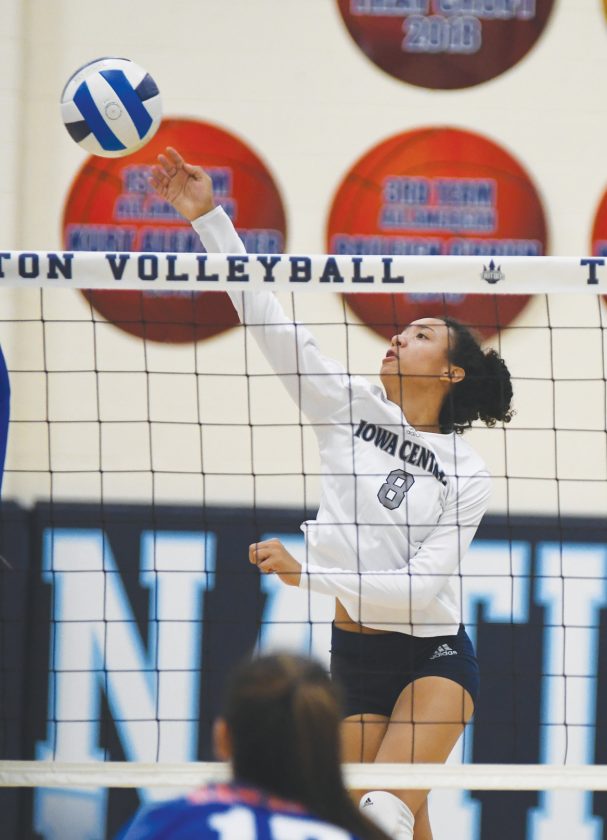 —Messenger photo by Britt Kudla Amaya Finley of Iowa Central goes up for a spike against RedTail. Finley was named ICCAC player of the year. Kealey Anderson was named freshman of the year and Sara Horn was coach of the year.

Amaya Finley came to Iowa Central and the volleyball team to make an impact.

And that is exactly what she did.

The California native set a new school-record for career kills and helped the Tritons to back-to-back ICCAC regular season titles. Finley was recently named the conference player of the year, just one of several postseason awards for Iowa Central.

Kealey Anderson earned freshman of the year honors, Sara Horn was the coach of the year and both Finley and Anderson garnered all-region and all-conference first team status.

Haley Alharithy and Abbie Stewart were both named to the all-region and all-conference second-team, with Taylor Bienemann and Alesha Johnson securing honorable mention all-conference status.

“Amaya and Kealey are definitely deserving of this award,” Horn said. “There were not many teams we played the entire season who had a 1-2 punch at any position like we did on the OH. I’m glad the conference coaches recognized that because Amaya and Kealey could have had a ton more stats if they were on a lot of other teams, but the balance in our team meant we didn’t need to set either of them every ball.”

Finley finished her two-year career with 1,116 kills, becoming just the second player in program history to surpass 1,000. She also moved ahead of Gabby Sullivan for most career attacks with 2,970 and finished 10th in digs with 977.

“It’s an honor to be named the conference player of the year,” Finley said. “My time here went by fast. I learned a lot and developed as a player. I was able to make some good memories and meet great people.”

This past season, Finley recorded 585 kills and 1,531 attacks, both numbers that place her fourth on the school’s single-season charts. She currently ranks second in the nation in kills and attacks.

Anderson recorded 556 kills, the sixth-most, and 1,418 attacks, the seventh-most. The newcomer ranks fourth in the nation in kills.

Stewart, a sophomore, posted 152 blocks, which was good for eighth-most in a single-season at Iowa Central. Alharithy, a freshman, recorded 148 blocks, the 10th-most in a season.

“Abbie and Haley were similar to our OHs in that we didn’t have a drop when either of them went out,” Horn said. “They were both solid blockers and hitters, which can be rare with middles who often either specialize in defense or offense.”

Bienemann, a sophomore, finished with 1,078 career digs, including 667 this past season. Her career total was good for seventh-most and her single-season was the ninth-best mark in program history.

Johnson concluded her first season with 1,122 assists, an average of just over eight per game. She had 63 in a match vs. Bismarck State earlier this year, the third-most in school history.

As for the coach of the year honor, Horn offered praise to those around her.

“Our team had a great season and we had such a great support system,” she said. “Assistant coaches Lacee McLaren and Stevie Fremouw were essential in coaching and mentoring these girls. Former coaches Alyssa Guarnaccia and Jordan Webb volunteered their time despite other full time responsibilities.

“Our athletic trainers Heather Trobec and Taylor Pitts had their hands full with quite a few injuries this season. Strength Coach Miguel Secor works with the girls year-round not only on their athleticism but their mental training as well. The success of this season wouldn’t be possible without the help of so many.” 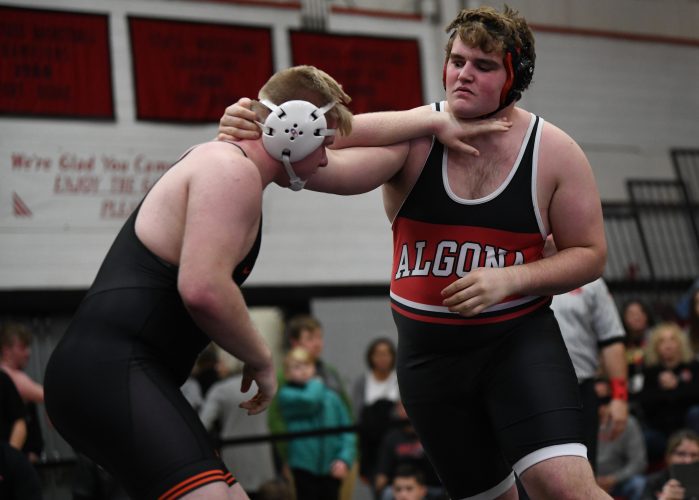