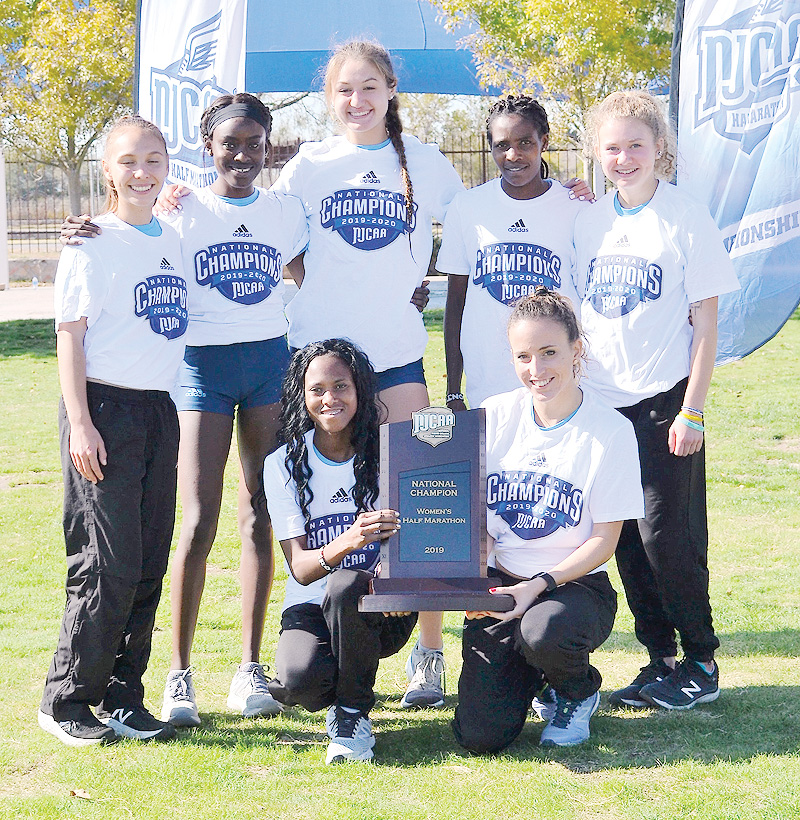 The Tritons won gold for the fifth time in school history, tying the record with El Paso, who finished second this year to Iowa Central. It also marked the third time in the last four seasons that the Tritons have placed first at nationals.

Winrose Chesang made it a clean sweep, as she won the individual race, completing the course in 1:20.03.6. The Top-4 finishers were separated by just 46 seconds total.

“I was standing around mile 10 and I could see in Winrose’s eyes she wasn’t done,” said Dee Brown, the Director of Track and Field and Cross Country at Iowa Central. “She is a very special girl and I feel that after not going for the win at cross country nationals, she had some unfinished business to take care. As she ran by me I shouted to her, ‘You got your eyes locked in on them, we know you can do this.’

“I didn’t get to see her until just before mile 13 and sure enough, here comes the lead biker and much to everyone’s surprise, Winrose. I was standing near a couple of the other coaches who had girls among the Top-3. Let’s just say they couldn’t believe it.”

Chesang was eighth last year and was sitting in the middle of a crowded pack until making a dash for the finish. Her time was the second-fastest in school history in the half-marathon.

With her win, Chesang joins Leanne Pompeani and Adva Cohen as individual champions from Iowa Central. Pompeani was a two-time winner, as the Tritons now have an NJCAA-record four individual half marathon champions.

“The women were the favorites going in and the entire race played out like a fairy tale,” Brown said. “There were three women from three different schools up front and then we had our next six girls not too far behind them most of the way. The Top-3 ladies pulled away leaving our women strung out by 10 miles.

“Winrose was at least a minute behind the leader at that point and at least 10-to-20 seconds behind third. After that, the rest of our ladies were pretty evenly spaced out.”

“Our men made a valiant effort,” Brown said. “I gave them the choice of running hard and going for the win or playing it safe and getting an easy second. We knew coming in El Paso’s men were built well for this event. Their Top-4 guys took off fast from the gun and we had a chase pack not too far behind them. Our guys hung on as long as they could but eventually a few of them dropped off.