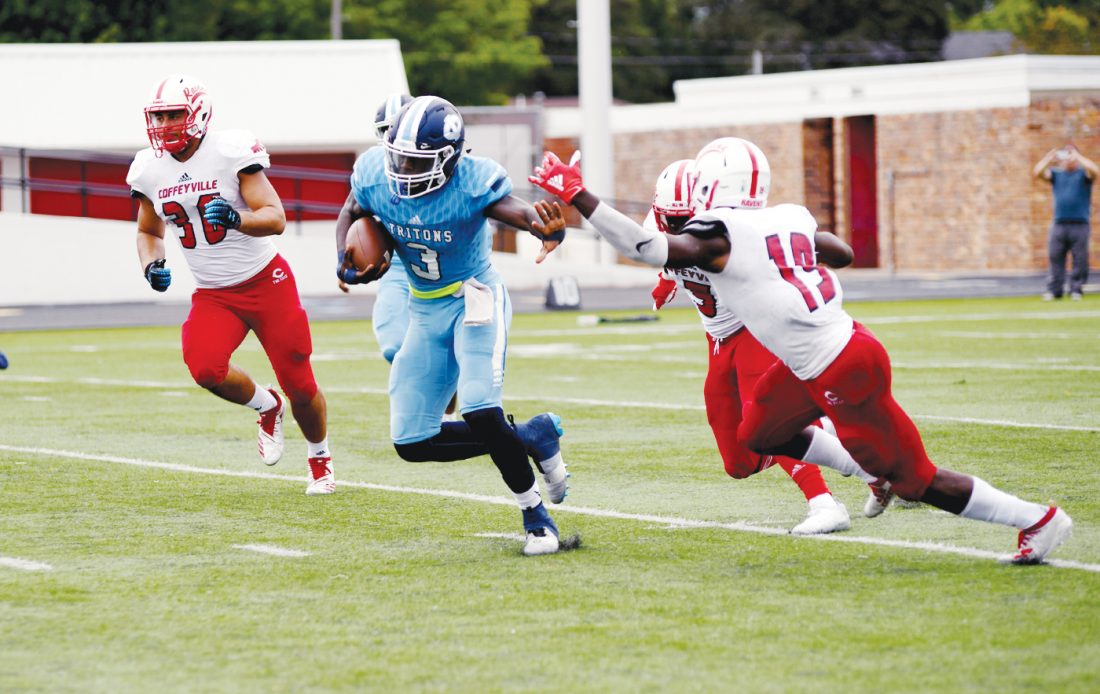 —Messenger photo by Britt Kudla Iowa Central’s DJ Irons was named the ICCAC Offensive Player of the Year on Thursday. Head coach Jesse Montalto was the Head Coach of the Year.

All DJ Irons was looking for was an opportunity.

He received that from Iowa Central and head football coach Jesse Montalto.

Irons, a transfer from Eastern Kentucky, was named the ICCAC Offensive Player of the Year. The quarterback was one of 12 Tritons placed on the all-conference team.

“Being able to win the conference and get this award for our staff is a big deal,” Montalto said. “We had a great year last year winning eight games and the coaching staff did a tremendous job coming back.”

Iowa Central finished the year 6-6 overall and 2-0 in the ICCAC, winning the regular season conference title. They will face No. 19 Nassau on Sunday, Dec. 8 at 3 p.m. in Cedar Falls inside the UNI-Dome.

Irons, who battled injuries this year, is the current NJCAA leader in quarterback rating at 191.1. He has thrown for 1,724 yards, completing 63 percent of his passes with an 18-to-3 touchdown-to-interception ratio.

“This award means everything because all of the work I did in the offseason all the way until now paid off on the field,” Irons said. “My time here at Iowa Central has been a life-changing, humbling experience.”

Along with that, Irons has ran for 231 yards and scored five more touchdowns. In games in which he took the majority of the snaps under center, the Tritons went 6-2 including wins over the Reivers and Ellsworth in the conference.

“My health progress towards the bowl is just getting back to 100 percent and working out preparing for the game,” Irons said. “We want to get a ring and bring it back to this community and make history.”

Taylor leads Iowa Central with 698 yards, as the Michigan transfer has found the end zone three times. He also has six receptions on the year.

Achan has a team-high 50 catches for 745 yards and nine scores, with Witty adding a team-best 1,077 all-purpose yards.

Cross, Brown and Barber all have recorded over 70 tackles, with Burks posting four sacks. Walls has four interceptions on the year.

Waugh snapped every Triton punt and kick this year on special teams.

“Tanarious and Rashad were outstanding, Bradford and Rodriguez give us two guys that can lead us into the offseason. Marquis was dominant up front, Cross conitnued off his year last year and Walls was great in the secondary.”